From the Crikey grapevine, the latest tips and rumours … More ADF concerns about “turning back the boats”. A long-serving former naval officer has contacted Crikey to raise concerns that the Coalition’s policy of turning back asylum-seeker boats at sea may amount to an “illegal order” and could be contrary to international law. Crikey’s contact, who does not […]

More ADF concerns about “turning back the boats”. A long-serving former naval officer has contacted Crikey to raise concerns that the Coalition’s policy of turning back asylum-seeker boats at sea may amount to an “illegal order” and could be contrary to international law.

Crikey’s contact, who does not wish to be named, says he applauds recent comments by retired Defence Force chief Chris Barrie raising doubts about the Coalition’s policy. Our source says when he was in the Navy, “we had drilled into us the responsibilities of the International Law of the Sea”:

“In my day comments such as Abbott’s about turning back the boats would have been contrary to all the provisions of the Law of the Sea and would have caused major morale problems within the Navy.

“Also, contrary to his comment that the services are answerable to the government there is such a thing as an illegal order. Such an order should not or must not be obeyed.

“An obvious situation is where a senior person in the military orders a junior to kill some non-combatant who is captive and no threat. Similarly I can envisage a situation under an Abbott government where a captain of a Navy ship could deem an order to be illegal and not carry it out.”

The former naval officer has suggested the intersection of international law with the Coalition’s policy should be considered by experts in the field. Is this your area? Get in touch.

SackWatch: ‘Tiser tribulations. The staff cuts at News Limited are starting to bite at The Advertiser in Adelaide, where we hear selected staff have been “shown the door on a regular basis in recent months” as News Ltd shifts towards a single news desk to start on July 21.

Apparently adelaidenow.com.au has been “gutted”, with staff shifted to a general news desk to supply copy across all platforms; those who wished to stay in digital were invited to apply for jobs in Melbourne, where digital production is being centralised. Casual staff have been let go, as have the copytakers who used to compile sports results on Saturdays — Pagemasters is now producing those sports pages for the Tiser’s sister paper the Sunday Mail.

“Voluntary redundancies are on offer while staff who are resistant to suggested changes are finding themselves on the list of potential forced redundancies should the voluntary call not reach its target,” an insider says, adding that the restructure is “taking its toll on staff morale”.

“You get the feeling we are all for the high jump — you just hang on for as long as you can,” our source says.

Got an insider’s account of the restructures at News Ltd or Fairfax? Let us know.

Praise from an unusual quarter. Amid a sea of anti-carbon tax sentiment in the letters to the editor in the Sunday Herald Sun came a letter of praise for the tax. “I’m just glad that we are finally doing something about [climate change]”, wrote Andrew Hurst of the ACT as he bucked the trend.

Crikey wonders if this is the same Andrew Hirst of the ACT, who is Tony Abbott’s senior media adviser? The spelling is not quite the same but perhaps that was a typo as Hirstie dashed the letter off in a hurry. 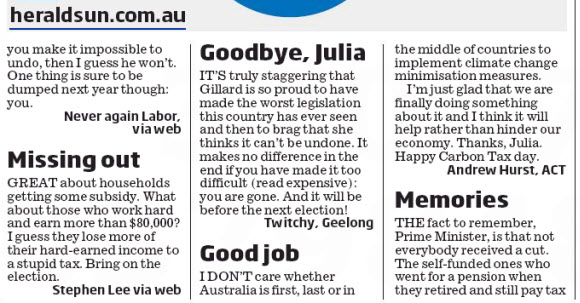 No soup please, we’re BHP. Crikey is fascinated by an 11-page internal memo to staff at BHP’s new Perth offices. The memo, which comes to us courtesy of The Australian Financial Review, stipulates, among other matters, that staff cannot eat soup at their desks — cold soup can be consumed at communal hubs on each floor, but hot soup may only be enjoyed in a special zone on level 45.

Crikey has decided to emulate the memo and instruct staff at Crikey HQ that only a “sensible amount of lollies” may be consumed at the desk. We’ll let you know how that edict goes.

Crikey loves to read interesting workplaces memos; feel free to send us your contributions. Any other workplaces got some memorable rules as to office behaviour?

BHP : also cold soup NOT to be transported in lifts to Level 45.