The Sun King heads to Sun Valley. I didn’t see this anniversary noted in The Australian‘s media pages this morning; a year ago this week, the empire of Rupert Murdoch was reeling after the closure of the News of the World in the UK after the phone-hacking scandal proved to be too much.

On July 7, 2011, James Murdoch announced the News Of The World would be closed. Some 51 weeks later Rupert confirmed a separation in the family with the entertainment and newspaper/publishing businesses going their own ways. The company was then forced to abandon its $US12 billion takeover for the 61% of BSkyB it didn’t own. James Murdoch was then forced to abandon boards on companies outside News, such as Sotheby’s, as well as heading up News International, and then BSkyB.

Remember also how Rupert Murdoch skulked around the yearly Sun Valley media moguls talkfest in the US, refusing to discuss the phone-hacking scandal, even to the extent of making a presenter for Fox News, Stuart Varney, look like a sycophant:

STUART VARNEY: The story that is really buzzing all around the country, and certainly here in New York, is that the News of the World, a News Corporation newspaper in Britain, used …

RUPERT MURDOCH: No, I’m not … I’m not talking about that issue at all today.  Sorry.

That was an approach adopted by Murdoch as he disappeared from the regular post quarterly earnings announcements from News Corp and was as contrite as ever at the 2011 AGM in Los Angeles. Now it’s time for another Sun Valley mogul-a-thon, so expect Murdoch to be far more out there. Sun Valley starts Tuesday night and runs for four days. According to The Guardian, it will be a line-up of rich folk and movers and shakers. — Glenn Dyer

Front page of the day. Floods in Russia over the weekend have killed more 150 people and anger is now being directed at the Putin government for a lack of information and warnings: 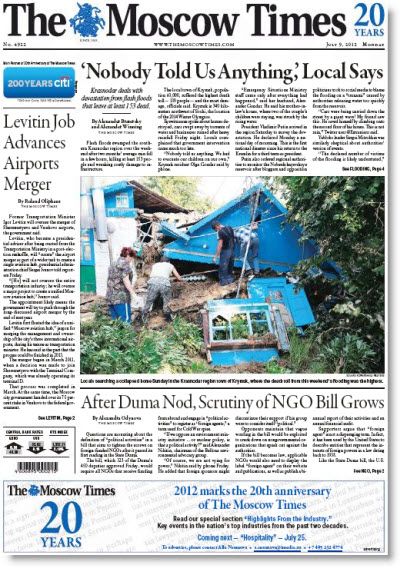 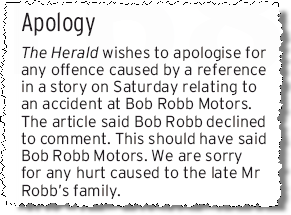 “Media company APN has confirmed that the New Zealand Herald will be moving to a compact format in September 2012 as part of an overhaul of the look and feel which includes a website redesign.” — mUmBRELLA

Phone-hacking charges could be soon

“Prosecutors aim to decide by the end of this month whether they will bring phone-hacking charges against former News of the World journalists, the director of public prosecutions has told the Guardian.” — The Guardian

US newspapers are running out of time

“There have been cracks in US newspaper publishing operations that are both hilarious and terrifying.” — The New York Times

“An imam in the north-eastern Oujda region of Morocco recently declared in a sermon that Mokhtar el-Ghzioui, the editor of the daily al-Ahdath al-Maghribia, should be put to death for his support of decriminalising s-x outside of marriage.” — The Inquisitr