The IEA says renewable energy deployment to accelerate despite economic downturn. And it notes solar PV is increasingly competitive, even for miners. Giles Parkinson of RenewEconomy reports.

The International Energy Agency has delivered a bullish outlook for renewable technologies, saying its deployment would accelerate even beyond the rapid growth of recent years — despite the winding back of incentives and subsidies in some countries.

IEA executive director Maria van der Hoeven said more than 710GW of renewable energy capacity is expected to be installed in the next five years, a 45% jump over the previous five years. But it is still well short of what is needed to meet emission abatement and climate change targets.

Her predictions were made in the IEA’s “Medium-Term Renewable Energy Market Report”, the first the conservative IEA organisation has completed for non-fossil energy sources. As van der Hoeven said during a media event with international journalists last night, that in itself is a reflection of the deep changes in the global energy market.

“It show how far we have come in four decades since 1974,” van der Hoeven said. Initially the IEA was focused only on monitoring oil supply disruption risk, and predicting the state of fossil fuel markets in the short, medium and long term.

Now, she says, the IEA recognises that the addiction to fossil fuels has pushed the world “to the brink”, the result of a “collective policy failure” to bring greenhouse gases under control. “Renewables have come of age,” she said.

The latest report comes to some interesting conclusions about the deployment of renewables. The first is that in Europe, despite the deep economic crisis and negative growth, renewables continued to grow and no country had wound back their renewables targets, even if they had lowered subsidies as costs came down and budgets came under pressure. In some countries such as Italy, the targets had increased even as the subsidies were wound back, reflecting the rapid cost declines.

But while Europe continued to be a key centre for renewable deployment, most (60%) will occur in non-OECD countries, with China emerging as the powerhouse, accounting for 40% of renewable deployment over the next five years. The other key markets are the US, India, Germany, Brazil, Italy and Japan.

“Renewable energy is one of the only real success stories at the moment,” van der Hoeven said. Solar PV panels in households and business had average 42% annual growth over last decade, wind had averaged 27% per annum growth.

“Renewables offer more than just a positive for the environment,” she said. “It offered also a diversity of energy supplies and enhances energy security.”

Didier Houssin, IEA’s head of energy markets, made some interesting points from the 200-page report. Deployment of renewables is not slowing down despite the lack of economic growth, it is accelerating and will spread out geographically. This in turn is creating a “virtuous circle of increased competition and cost reduction”.

China is the leader in renewable deployment, and despite starting at a high base, remains a leader even in growth terms, despite the lack of market signals in that country. The amount of renewable deployment in non-OECD countries (not including China) will exceed that of north America by 2017.

The IEA also recognised that renewables were causing wholesale prices to fall markedly in some markets. In Germany, because of high gas prices, this was having an impact on gasfired plants, the numbers of hours they produce and their profits. Markets needed reform to address these issues.

In the US, because of tighter EPA standards and the low cost of gas, coal was being displaced in large quantities.

Solar was also offering the most cost effective option for offgrid areas in non-OECD countries, Houssin added. “The good news is that solar PV is competitive in many markets around the world,” he said. Solar was also cheaper than oil-fired generation, and oil-fired generation currently accounted for 1,000 terrawatt hours around the world — around 20 times more than solar PV.

That was a big opportunity for solar. “It can be an option for mining in Chile and South Africa,” Houssin said. And non OECD countries had the opportunity to avoid the mistakes of OECD countries which had locked in fossil-fuel dominated grids.

Solar PV, thanks to its rapid cost reductions, is having great appeal. “We can see that. Everyone can put solar panels on his or her own roof,” van der Hoeven said.

And here are a couple of graphics that help illustrate some of the points made by the IEA. The first is the number of countries where sizeable deployments of individual renewable technologies were being made. By 2017, there were expected to be 55 countries with more than 100MW of solar capacity (up from 5 in 2005), and more than 70 with 100MW of wind energy. 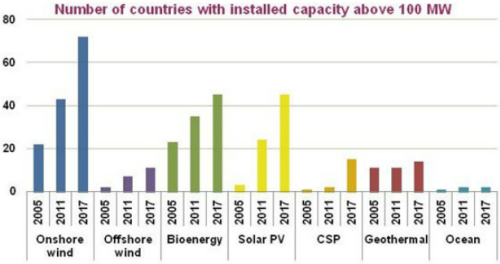 This graph below illustrates how each region will play to their strengths. Note the large share of solar in OECD Asia-Oceania (essentially Japan and Australia), massive wind in US, and hydro in non-OECD countries. 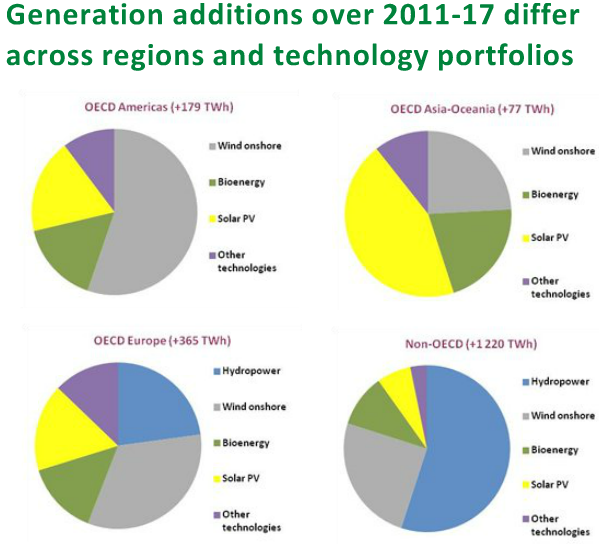 This shows how much the current deployment of renewables is dominated by hydro. But taking a line from 2012 to 2017, the share of hydro falls significantly, with non-hydro growing at an annual rate of 14.3%, compared to hydro’s 3.1%. 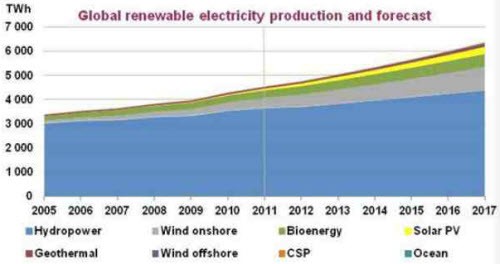 This graph below highlights the prospects in Japan, the world’s third largest economy, which is going to have one of the more interesting transformations as it focuses on solar, as well as wind and geothermal, to substitute for the nuclear energy that no longer has the confidence of the community. Japan is introducing the world’s largest feed-in tariffs (52c/kWh) to kick-start the solar deployment, which it aims to build to 28GW by 2020 (It has around 4.6GW now). 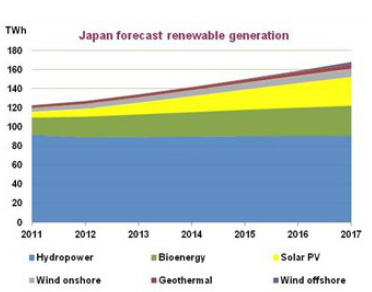 And this highlights the countries — and regions — with the biggest deployment of solar PV anticipated in the coming years, along with the compound average growth rates (CAGR).

Perhaps renewables facilitate economic expansion outside the present constraints of the grid.
This might follow the effect of Henry Ford’s affordable car which delivered North Americans out of their overpriced, central city slum accommodation and into the American Dream of sustainable suburbia. In that free market, unlike Australia, farmers set the lowest land prices by competing with each other to simply put pegs into the ground for their car -delivered new customers. No water, sewer or electricity grids and only rudimentary roads. With former high rents freed up for investment in purchasing the products of mass production, and by expanding Ford’s “Five Dollar Day” method of creating a market for his goods.
(Adam Smith’s “returning capital” which describes how manufacturers’ wages costs are returned when the goods are sold, which is were the manufacturing nations’ trade surpluses at the expense of US consumers comes from).
To reiterate; renewables may be enabling technologies which liberate spending from a high cost sector like the grid with its expensive, monopoly-like housing options and services.
Just a thought which focusses on unaffordable housing as the major economic problem today and
renewables as a liberating solution. Pity the Liberals aren’t interested in anything besides “conserving” the status quo.

Note in all the, ahem, sunny figures and forecasts about renewables deployment, not one word about how emissions have or will reduce as a result. Rather, despite Europe being “a key centre for renewable deployment”, and “the deep economic crisis and negative growth”, it has just burned its most coal since 2006 (businessweek.com/news/2012-07-02/europe-burns-coal-fastest-since-2006-in-boost-for-u-dot-s-dot-energy)

Join the dots – renewables, by themselves, will not do the job required.

My daughter is in Germany for the year and says there are solar panels everywhere. When people ask her about solar energy in Australia, she feels slightly embarrassed.

One supposes that the Japanese Daibatsu, who have read Adam Smith, will be manufacturing their own renewables and keeping the wages in the country.
This tends to marginalise deabate about price because the increased employment facilitates the market.
As with Japanese Cars, a large domestic economy creates the economies of scale and profits are enhanced by exports.
We are talking about markets are we not? “OECD countries had locked in fossil fuel dominated grids”.
Australia should regard itself as a developing country and just get on with regional development.
It is a bloody “Continent” after all. Not a clutch of capital city mortgage slaves who are kept in captivity lest the banking sector fail. Renewables! you have noyhing to lose but your chains!

Andybob: your daughter should not be even slightly embarrassed.

And all for what (so far)? barely 3% of total power production. And it’s unreliable power of course. Not a single nuclear or FF power station can be retired- leading to expensive redundancy.

Here’s some detail from DS:

“Solar subsidies cost German consumers billions of dollars a year and are widely regarded as inefficient. Even environmentalists are concerned that Berlin’s focus on solar comes at the detriment of other renewables. But the solar industry has a powerful lobby, and politicians have proven powerless to resist.
Next year, a three-person family will likely have to pay up to an additional €175 ($220) to finance the construction of renewable energy infrastructure…. Erdmann has calculated the effects that the latest changes to the EEG will have between now and 2030. He believes that subsidies for renewable energy, including an expansion of the power grid, will saddle energy consumers with costs well over €300 billion ($377 billion).

Photovoltaics are threatening to become the costliest mistake in the history of German energy policy. Photovoltaic power plant operators and homeowners with solar panels on their rooftops are expected to pocket around €9 billion ($11.3 billion) this year, yet they contribute barely 4 percent of the country’s power supply, and only erratically at that…
the German Physical Society writes in an expert opinion, stating, “Photovoltaics are fundamentally incapable of replacing any other type of power plant.” Essentially, every solar array must be backed up with a conventional power plant as a reserve, creating an expensive double infrastructure…
To save one ton of CO2, Weimann explains, we could either spend €5 on insulating an old building, €20 as investment in a new gas-fired power plant, or around €500 on photovoltaic arrays.”