“Just how far can we go down the path of institutionalised spying before we become a police state along the lines that George Orwell so eloquently described in his landmark novels Nineteen Eighty-Four and Animal Farm?”

Remember when they chucked up all the CCTV cameras in Animal Farm? Interestingly, despite the strongly worded beginning, the editorial ends up concluding that the police state is probably necessary to stop all the criminals running rampant in the Hobart CBD. — Andrew Crook

Turning back time at The AFR. No one is subbing The Australian Financial Review these days, or if they are, they have lost track of time and the calendar. From the Geoff Kitney Canberra Observed column on page 51 this morning:

“At midnight last Sunday, when the calendar ticked over to July 1 and the carbon and mining taxes started …”

Ah, no it had to be midnight Saturday for the clock to tick over to July 1, which was last Sunday. — Glenn Dyer

Front page of the day. There’s only one thing the UK Sun loves more than a terrorism beat-up and that’s beating up a botched government handling of a fake terror alert — due to an electronic cigarette: 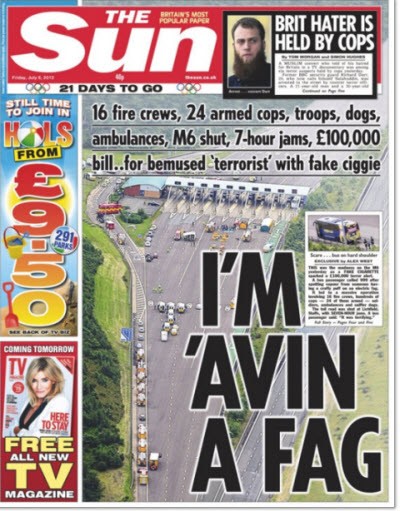 “A newspaper editor stood down by Fairfax Media after seeking Liberal preselection has had his nomination cancelled after an internal review found his candidacy was not in the party’s interests.” — The Australian

“The Twitter account of Al-Jazeera’s English-language social media show has been hacked by supporters of Syrian President Bashar Assad.” — AP

“Journalists love to use words like ‘discovery’ and ‘breakthrough’ but scientists cringe at such words. They might be especially uneasy with the phrase ‘The God Particle,’ a term created by Nobel Prize-winning physicist Leon Lederman as a way of explaining how the subatomic world works — not who created it.” — Poynter

“When Rupert Murdoch let it be known in an interview last week that he was thinking of giving The Wall Street Journal a new, streamlined name — WSJ — he was joining a discussion within the newspaper that dates back at least to the end of World War II.” — The New York Times

“An Israeli journalist who drew on leaked army documents to report the alleged assassination of Palestinian militants, prompting a prosecution and debate about press freedom, was spared jail time in a plea bargain on Thursday.” — Reuters

The Mercury – on “Big Brother” – isn’t that a Limited News pony ….. or something to do with “hacking”?