Defence Force chiefs have slammed the decision by News Limited to publish the name of the Australian Special Forces soldier killed in Afghanistan this week, in scathing letters sent to editors and CEO Kim Williams.

The Chief of the Army and the Chief of Australia’s Defence Force have slammed the decision by News Limited to publish the name of the Australian Special Forces soldier killed in Afghanistan this week, in scathing letters sent to newspaper editors and CEO Kim Williams.

Editors of News Ltd papers, including the Herald Sun and The Daily Telegraph, received a “letter to the editor” from Lieutenant General David Morrison calling the decision to make the soldier’s name public in articles published July 4 “unconscionable and un-Australian”. 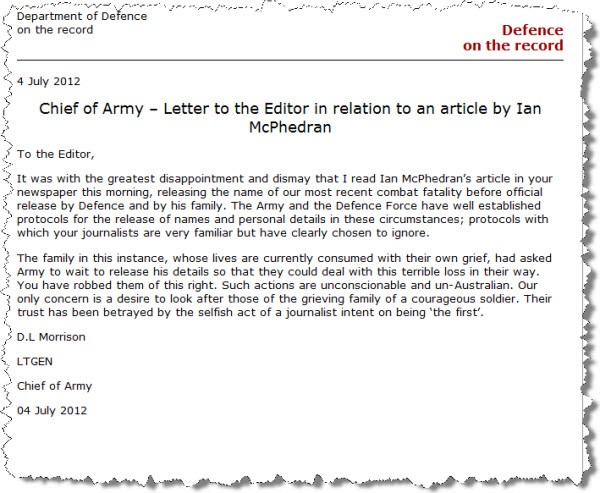 News Ltd journalist Ian McPhedran published the soldier’s name despite requests from his family to keep it private for the time being, a decision Morrison condemns in his letter to the editors:

“The family in this instance, whose lives are currently consumed with their own grief, had asked Army to wait to release his details so that they could deal with this terrible loss in their way. You have robbed them of this right. Such actions are unconscionable and un-Australian. Our only concern is a desire to look after those of the grieving family of a courageous soldier. Their trust has been betrayed by the selfish act of a journalist intent on being ‘the first’.”

Daily Telegraph deputy editor Mick Carroll confirmed the letter had been received but would answer no further questions. Carroll says via email it is “a matter between us and the army”.

In addition, the Chief of Defence, General David Hurley, contacted Kim Williams to further express the Defence Force’s anger at the publication. 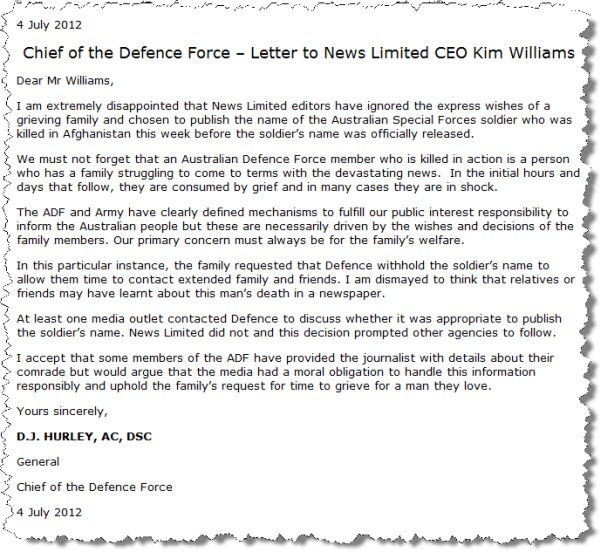 Hurley noted that other media outlets had checked with the department to clarify if it was appropriate for the name to be published, but News Ltd did not:

“In this particular instance, the family requested that Defence withhold the soldier’s name to allow them time to contact extended family and friends. I am dismayed to think that relatives or friends may have learnt about this man’s death in a newspaper.

“At least one media outlet contacted Defence to discuss whether it was appropriate to publish the soldier’s name. News Limited did not and this decision prompted other agencies to follow.

“I accept that some members of the ADF have provided the journalist with details about their comrade but would argue that the media had a moral obligation to handle this information responsibly and uphold the family’s request for time to grieve for a man they love.”

Phedran’s article was published in News Ltd tabloids, while in The Australian a front-page article by Brendan Nicholson and Mark Dodd also made the soldier’s name public on July 4. They wrote: “The Perth-based trooper, named in News Limited papers as …”

Crikey understands News Ltd has formally responded to the letters. Comment has been sought from the company and we will publish their response when it is received.

Poor Packer has had a gutful this morning

Poor General Hurley, he is clearly deluded, linking the terms “moral obligation” and News Limited. Surely he realises that these two states are oil and water?

simply another `up you lot` from an organisation that is desperate for readers, who would come from the lot they have just insulted!

If NEWS Ltd responded to the letters, was it in the format of the Leters to the Editor column, to exhibit to their esteemed readers the lack of moral fibre and compassion the editors of their rags have?
Pardon the pun, yet more ammunition for Sen Conroy’s legislation into media.
Funny how people said the phone hacking acandel could not be happening in Australia, yet repeated actions by News Ltd rags say everything to the contrary- any news at any cost.

More Murdoch newspaper arrogance – whether it is this or Millie Dowler.

Small wager with self on the blame being put on some production schedule.