In today's Media Briefs: Fairfax taps Hoath in executive shuffle ... What our mini-moguls might really fear ... The future of advertising in newspapers: the lovelorn letter? ... The horror of Labor's sideshow and more ...

Fairfax taps Hoath in executive shuffle. Fairfax Media has moved to shore up its commercial ranks with the appointment of Melbourne publishing chief David Hoath to a new role as its ailing metro division’s chief operating officer. In a jargon-spattered alert sent to Age staff yesterday, Metro CEO Jack Matthews revealed the position of publisher would be abolished and Hoath kicked upstairs to see “a renewed focus on ensuring our core print products … serve the needs of our audiences going forward”.

“The new COO role will play a critical part in the redesign and reinvigoration of our print mastheads. The COO role will also be responsible for the day to day running of the mastheads, including centralised circulation strategy and sales, manufacturing, distribution and facility management,” he said in an email obtained by Crikey.

Hoath will oversee a five-person band of axemen to rein in costs across loss-making print mastheads The Age, The Sydney Morning Herald and the profit-making The Canberra Times as the media giant moves to digital. Three “operations directors” will be appointed in Sydney, Melbourne and Canberra, a “production director” will “manage Metro wide production activities across all geographies” and a “director of circulation and newspaper sales” will “continue to focus on profitable [contra unprofitable] circulation and distribution”. — Andrew Crook (read the full story here)

The future of advertising in newspapers: the lovelorn letter? Is there a new craze going on or is it perhaps a new revenue stream for the ailing newspaper business? Yesterday’s Adelaide Advertiser carried a quarter page ad on page 14 from Gary, addressed to Nic, professing his love, hoping to rekindle the romance and get back together. “I miss you. I miss us,” writes Gary. “We belong together. What can I do?” Well taking out a prominent ad in a major metropolitan newspaper is a start: 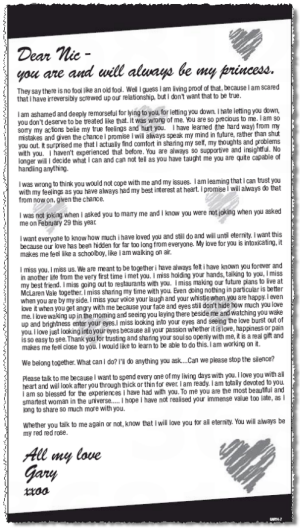 Perhaps Gary has taken a page out of the playbook of American man Dan Feltenberger, whom Crikey noticed in May had taken out a quarter page ad in The Bali Times looking for love. We hope it ends well for Gary and that this new boom in personal ads is the harbinger for the fortunes of newspapers everywhere. — Leigh Josey

The horror of Labor’s sideshow. Watching the Craig Emerson “horror movie” — and kudos for choosing a song that self-describes its PR disaster nature — one gets that rarest of feelings, the moment when the jaw actually drops. Hard to know which is the best/worst bit — the couple of seconds of Emerson standing there in silence while his hamfisted assistant finds the play button, Emo jigging to the beat, the singing itself, or merely contemplating the whole set-up; the rehearsal in the office, setting up the ghetto blaster on the lawn, etc.

How is it, slack-jawed sympathisers around the world ask, how is it the Gillard Labor government has become a bad episode of The Thick of It? Could it be of any significance that these disasters started occurring after the arrival in the PM’s office of  UK Labour fixer John McTernan, widely seen as one of the models for shouty Scottish spinner Jamie MacDonald? Australian politics, first as satire then as tragedy. Is it worth consulting Guido Fawkes from 2007, when McTernan first came to help: “Aussie Labor Party Doomed”. Good god, the horror hasn’t even begun. — Guy Rundle

Front page of the day. Can’t you feel the patriotism? Crikey scoured today’s US newspapers to find which one wrapped itself with the American flag in the most hot dog-eating, Second Amendment-loving manner possible in celebrating the fourth of July. We chose The Covington News from Newton County, Georgia:

Who’s got the worst corporate newsroom?

“A report has revealed the best and worst corporate newsrooms of companies listed on the ASX by how effectively they deliver news to journalists through their websites.” — mUmBRELLA

“Former Newsnight editor George Entwistle has been appointed the next director general of the BBC, pledging to return the broadcaster to its creative roots and cut back further on bureaucracy.” — The Guardian

“A former Mirror journalist was one of three people arrested by police investigating corrupt payments to public officials, it has emerged.” — BBC News