There's a new late-night TV act that leaves Leno, Letterman, Conan and certainly Vizard for dead; a comedy duo unmatched, dare we say, since the glory days of Laurel and Hardy.

There’s a new late-night TV act that leaves Leno, Letterman, Conan and certainly Vizard for dead; a comedy duo unmatched, dare we say, since the glory days of Laurel and Hardy. It’s the Clive and Tony show. 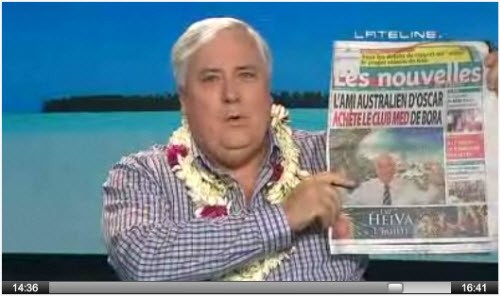 There was Clive Palmer again last night, beaming in from sunny Papeete with a lei around his neck — “Ia ora na from Tahiti Nui,” the big man said, grinning — to continue his now regular Lateline chatter with the man he describes as “Australia’s number one journalist”, Tony Jones. Talk about chemistry.

Tony, ever the straight man, rebuffs the praise and tries valiantly to ask the tough questions. But Clive is too busy clowning around. Which seat is he going to run in? “The seat of Kennedy and maybe the seat of Fairfax.” Right, so why Kennedy all of a sudden? “Many polls, they’ve had me as the most popular north Queenslander.” Huh. What happened to taking on Wayne Swan in Lilley? “I listened to what Tony Abbott said. He said, ‘Clive, don’t stand for Lilley. I don’t want you to stand for Lilley.’ And of course I didn’t stand for Lilley because I respect my leader.” Right. So will you toe the LNP line? “I’m prepared to influence the national debate and the debate in the Liberal Party.” Aren’t you just going to buy your way into Parliament? “Can you deny my rights as a citizen of Australia just because I’ve been successful in life, it hasn’t been my fault.” No, I suppose not.

Then there was this claim: “I know that Tony Abbott said some things about door knocking being important and it is. I’ve door knocked on more than four million doors since 1969.” We reckon he would have had to hit 191 doors a day, 365 days a year, to amass that tally.

There’s only one thing better than the Clive and Tony show — the delicious prospect of Palmer taking on Kennedy King Bob Katter at the next election. We can’t wait.

Say what Clive is saying is that he has for 43 years door knocked for 88.5% of his time.

That he has used the remaining 165 minutes ( little less than three hours ) for sleeping, eating fornicating and business.

One would assume that as door knocking involves walking he would have burnt a lot of calories therefore to get the size he is would require him to consume enormous amounts of calaries which takes time.

This guy is a legend, a type of superman. To achieve what he has makes is a miracle. Lets vote him dictator for life with Calvin as his Grand Vizier.

@THE PAV: Yes, since that statement; and true to form, I didn’t hear any journalist say: Clive that’s unbelievable! Little wonder that most thinking people no longer see a reason to pay for the lightweight media that is on offer in Australia. The secret is do your own maths and write as you did.

If Clive Palmer has doorknocked 4 million homes, shouldn’t he be a lot thinner?

I suspect that many jounalists are incapable of doing a little quick mental maths .

They need an F7 button for maths

For example how often do you hear the phrase” Ten times less……..”

Err……… how can something be more ( ie times) and less at the same time.

Perhaps they mean one tenth.

It was funny how through the entire interview all Clive Hutt Palmer said was how much money he had spent here & given to them & paid for their holidays, donated to this council, that group, but he is not! buying his way into politics, honest, just listen to him.

The PAV maybe the CIA did some for him.