Front page of the day. As today’s Daily Telegraph front page shows there is nothing happening in Sydney, NSW or the world that is as important as tonight’s game three NRL State of Origin decider — if you’re a Blues fans, that is … 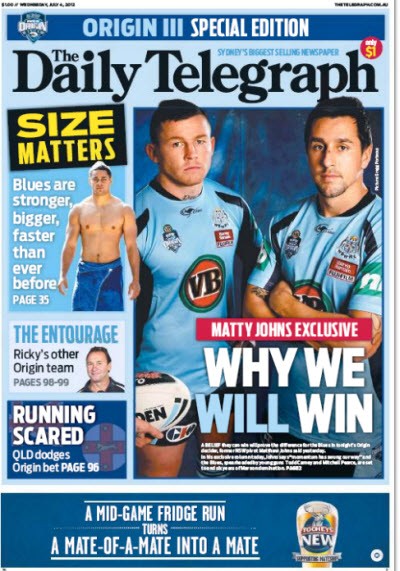 “Associated Newspapers is aiming to expand Mail Online, with reporters on the Daily Mail briefed that the online operation is hoping to open new bureaux in Toronto, Delhi and Sydney — and possibly a Spanish-language service.” — The Guardian

“Seven Network journalist Rahni Sadler will face court next month accused of illegally communicating with a prisoner but charges against the broadcaster have been withdrawn.” — The Australian

“Former magazine editor Ita Buttrose claims the producers of Paper Giants knew there were inaccuracies in the script before the show screened.” — mUmBRELLA

How the British press covered the American Revolution

“More than 200 years ago, the American Revolution captured the world’s attention much as events in Egypt, Libya, and Syria have over the past year. Then as now, most of what people knew about foreign events came from the media.” — Foreign policy