The more emotional parliamentary advocates for a bipartisan solution to the recent asylum seeker tragedy have zoomed up our charts this week.

The more emotional parliamentary advocates for a bipartisan solution to the recent asylum seeker tragedy have zoomed up our charts this week – tears and quivering lips in the House of Reps are always likely to garner media coverage. Independent Rob Oakeshott was a major focus as his bill passed through the lower house inevitably to be crushed by the Greens and the Opposition in the Senate, the collective reaction to mounting boat people deaths causing frantic activity but ultimately no result. Coverage was led by TV but was greatest on radio.

A far more definitive outcome on the other burning issue of the week: as our federal pollies returned home on break, the carbon tax became a reality on Sunday, and PM Gillard’s claims that the sky hasn’t fallen in helped maintain her spot at the top of the table. But the biggest mover of the week? Trade Minister Craig Emerson’s effort to support Gillard’s theory by performing a Thunderbirds-style cover of Skyhooks’ Horror Movie which saw him prep, primp and jiggle his way 25 places up our list, and all in the space of a few bars. 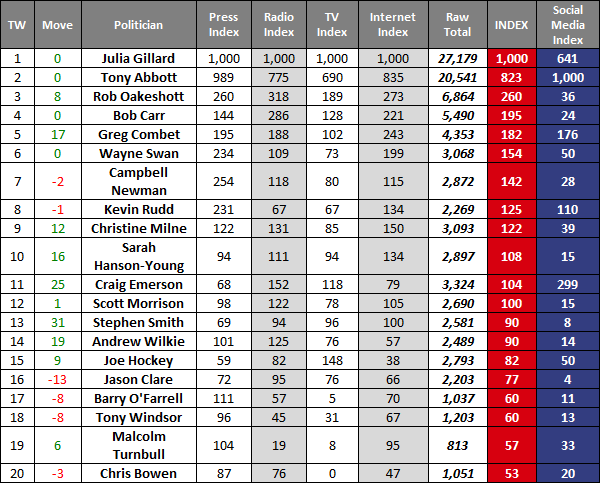 The usual suspects, including K-Rudd, are joined by Trade Minister Craig Emerson whose aforementioned Skyhooks rendition has been a Youtube sensation.

Maintaining this week’s musical theme, Rupert is no doubt consoling himself with the Neil Sedaka classic Breaking Up Is Hard To Do having finally been persuaded to split his business in two.