A tiger in the sack: anatomy of breaking AFL news

Did the AFL know that player Daniel Connors had been sacked ahead of a 2pm press conference and if so did they publish information that was sensitive ahead of one of its members, Richmond, going public with the news?

At 9.47am Herald Sun AFL gumshoe Mark Robinson tweeted that he had broken the news of a development at AFL club Richmond: two players were facing “severe discipline for social behavior“. Crikey has pointed the finger before at Robinson for jumping the gun on an AFL sacking but this time Robinson appears to have been measured in his reporting of the uncertain developments that were occurring.

Today’s get was a great scoop for Robinson — and, at the time of Crikey being published, the Richmond Football Club were to hold a press conference at 2pm surrounding the futures of the two players in question: Daniel Connors and Dustin Martin. All in a day’s work for scandal in professional sport and how they are covered by news organisations. Except one.

Jumping the gun today has been none other than the AFL itself, or rather by the controversial comprehensive news service the AFL publishes on AFL.com.au, which has come under fire for competing against traditional news outlets while also maintaining its role as administrator of the game. This morning — at around the time of Robinson’s Herald Sun exclusive — this story appeared on the AFL website. It’s initial headline was “Tigers sack Connors”. Over the course of the next hour or so the article was changed — watered down — so that the version that is displayed now reads “Connors sacked: reports”.

It wasn’t until The Age published this story at 11.44am stating that Connors was in fact sacked that the AFL story reverted back to “Connors sacked” although using the Age story as its main source. 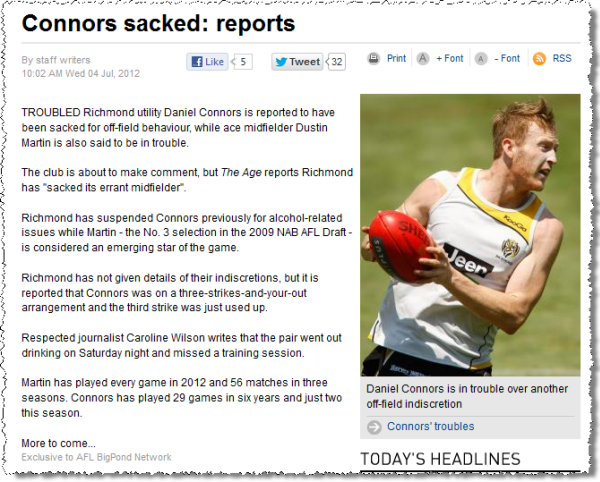 Which raises the question: did the AFL (and its news service) know that Connors had been sacked ahead of the 2pm press conference and if so did they publish information that was sensitive ahead of one of its members, Richmond, going public with the news? Or, in a bid to compete with the news breaking Age and Herald Sun, did the AFL news service simply make a mistake and was fortunate that Connors was in fact sacked?

No matter the answer, the AFL’s complicated relationship in how it reports about itself and the teams within its competition will remain.

The pride of Yuendemu takes centre stage in the AFL

Little bit tired of the AFL trying to have a foot in both camps. I’m sure, as the games overall administrator, they would have been advised of what had happened and the decisions made, but does that mean they should be reporting this as news? Where do they draw the line on what confidential information they are told about and what makes it onto their website?
PS – Its is the Richmond Football Club, not the Richmond Tigers Football Club.