From the Crikey grapevine, the latest tips and rumours … Leaked: Coalition talking points. Our mole from inside the Coalition camp continues to deliver us the daily talking points dispatched from Tony Abbott’s office to all MPs — or, as we like to call him here at Crikey, “TA” (see talking points). Craig Emerson and his […]

Leaked: Coalition talking points. Our mole from inside the Coalition camp continues to deliver us the daily talking points dispatched from Tony Abbott’s office to all MPs — or, as we like to call him here at Crikey, “TA” (see talking points). Craig Emerson and his Skyhooks-inspired routine is today’s theme — Australians, MPs will say, “deserve better than a mocking government”. Read the full document here.

Tiser’s degrees of separation. One keen-eyed Adelaide Advertiser aficionado is wondering what’s going on with the paper’s front page. Until last Thursday, the symbol for News Limited’s “1 Degree” environmental initiative — which aims to reduce News’ greenhouse gas emissions and “raise awareness about the changes we can all make” — sat in prime position below the Tiser’s masthead. Sister paper The Sunday Mail followed suit. The symbol was accompanied by a note proclaiming “The Advertiser is a carbon neutral company”.

Then on Friday the symbol vanished. Nothing on Saturday either.

Nor on Carbon Sunday. Yesterday, the logo was back — but no mention of carbon neutrality.

Our tipster wonders if the masthead manoeuvres mean News Limited is no longer offsetting its carbon emissions because of the arrival of the carbon price. We rang The Advertiser’s editor Sam Weir for comment, but he hasn’t returned our call.

CarbonWatch. After a long and painful gestation, the carbon tax is finally here — and we can expect some retailers to exercise creativity in their responses. Crikey is keeping tabs on surprising, amusing, way-out or downright dodgy behaviour as the carbon tax journey unfolds.

Kicking off CarbonWatch is Gold Coast-based CaseBuddy, which sells accessories for iPads and iPhones. It’s offering a discount to everyone who uses the discount code “JULIAR”, in order to “celebrate the government’s tax on the fourth most abundant element in the entire universe”.

One recipient of the emailed promotion was not enticed to purchase by it. “One might think an iPad accessories supplier might realise that at least some of their clientele might be the hated inner-city green-leaning latte-sipping Champagne socialist fair trade gay whale-saving elites that do support a carbon price,” the recipient told Crikey.

UPDATE: Casebuddy responded to Crikey’s request for comment this afternoon, saying the above ad “isn’t live anymore”. While the code “JULIAR” still nets a 10 per cent discount, CaseBuddy has doubled that to a 20 per cent discount, “as an apology”, for those who wish to use the discount code “CARBONFOOTPRINT” instead.

While the original ad appears to cast doubt on the need for restrictions on carbon dioxide, CaseBuddy told Crikey the company is of the view that climate change “does occur by both natural and man made influences”.

Got an entry for CarbonWatch? Let us know.

Not so very seaside. “Shoreham is a small and very tranquil seaside township …” reads The Saturday Age’s latest Life and Style glossy guide on weekends away. But if you follow the map provided, you’ll end up in the mountains in your bathers.

The guide to Shoreham, which is south-east of Melbourne on the Mornington Peninsula, features a map of Horsham, which is north-west of Melbourne near the Grampians. So don’t take the bucket and spade if you’re following the map. A Crikey reader suggested the faux map was “an outsourced subediting glitch, perhaps?” 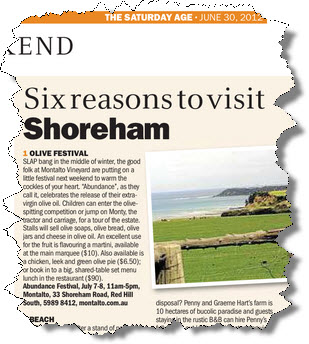 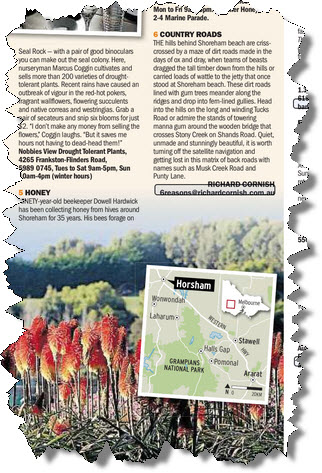 SackWatch. There’s plenty of government sympathy (and bailouts) for manufacturing workers whose jobs are under threat, but what about when it’s the government doing the sacking? Public sector jobs — state and federal — are being culled in their thousands. Got a tip on more public sector job cuts to come, or an insider’s report on the impact of job cuts on workplace mood and career prospects for hard-working public servants? Let us know.

Mayne shit sheet. There’s trouble at Melbourne’s Manningham Council, with a shit sheet circulating against councillor (and Crikey writer) Stephen Mayne’s bid for a seat in state Parliament. The letter, sent to householders, says “you have probably heard of Stephen Mayne. He likes to talk. But apart from hearing him occasionally on radio, what do you really know about Stephen Mayne?”. It then delves into claims against Mayne aired in The Age recently.

Mayne is on the way to the Victorian Electoral Commission to lodge a formal complaint, and is seeking the support of Manningham’s two ALP councillors quoted in the pamphlet, Ivan Reid and Meg Downie. Mayne believes the shit sheet is illegal because it is election material with no “authorised by”.

Apology as part of defamation settlement that includes payment of $50,000

Casebuddy will not get a sale from me .