Can you edit a paper and run for parliament? As conflicts of interests go, this one seems hard to top. Greg Mayfield, the editor of Fairfax’s South Australian bi-weekly paper The Port Pirie Recorder, has put his hand up to fill the Liberal Senate vacancy caused by the departure of Mary Jo Fisher. Mayfield told The Australian yesterday that he will continue to edit the paper during the three-week selection process and will be taking an “even-handed approach” to editorial coverage.

Stephen Mayne, who had to give up his gig editing The Australian Financial Review’s Rear Window column when he decided to run for parliament, says he can’t remember any precedents for Mayfield’s decision to remain in the editor’s chair. Gavin King, The Cairns Post editor-at-large turned Queensland assistant minister for tourism, resigned from the paper last year when he announced his desire to enter state politics. — Matthew Knott

Extra, extra: mag’s special TomKat edition. Who said that print was a tired old medium that’s too slow to react to breaking news events? Not the staff at ACP’S Women’s Day, who have rushed into print with a special mid-week edition commemorating the demise of TomKat (that is to say, Katie Holmes’ marriage to Tom Cruise).

“This is a huge story for our readers, who have invested in the relationship for many years,” the mag’s acting editor Lisa Sinclair said gravely in a press release issued today. “From the minute news of the split broke, the whole Women’s Day team sprang into action, working across the weekend to get the updated issue on trucks first thing Monday.”

According to ACP, the special edition — set to reveal “the reason Katie HAD to leave” — will hit newsstands tomorrow. — Matthew Knott

Front page of the day. Mexican newspaper Vanguardia leads today with a stylish graphic of new Mexican President-elect Enrique Pena Nieto under the headline: “PRI takes back Los Pinos (the official residence of the president i.e. the Lodge) President EPN!”: 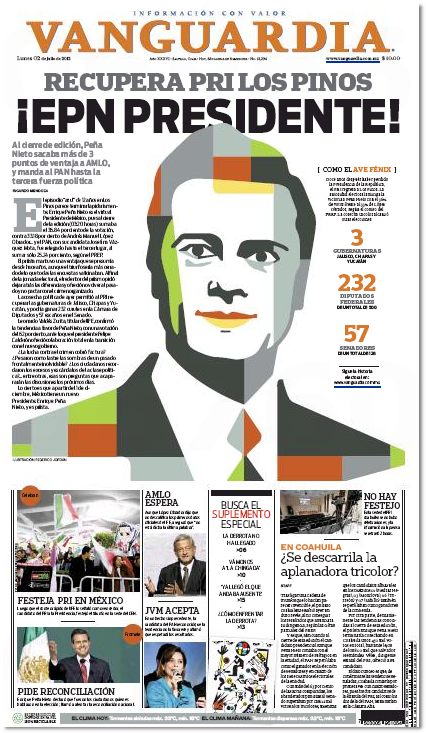 “David Carr has weighed in on News Corporation’s decision to split into two companies, and much like the rest of us, he sees trouble ahead for the publishing side.” — FishbowlNY

“Armando Montano, an aspiring journalist who was working this summer as a news intern for The Associated Press in the Mexican capital, was found dead early Saturday. He was 22 years old.” — The Telegraph

“I’ve known Anderson Cooper as a friend for more than two decades. I asked him for his feedback on this subject, for reasons that are probably obvious to most. Here’s his email in response, which he has given me permission to post here …” — The Daily Beast

How to get yourself on the News Corp enemies list — fast

Ranald Macdonald: what will be left after the Gina Bomb explodes?

Women’s Day acting editor’s words are alarming: “This is a huge story for our readers, who have invested in the relationship for many years,”

Is this what 21st century society terms an investment? How shallow and inconsequential we have become.