What if it’s not the tax but the broken promise?

I doubt that people have absorbed much of Tony Abbott's doomsday scenario.

What if it’s not the tax but the broken promise? Another opinion poll. Another disastrous measurement of Labor popularity. Another opportunity for government ministers to restate that things will improve from now on with the carbon tax at last a reality rather than a promise.

A promise? Oh, there’s the problem. I doubt that people have absorbed much of Tony Abbott’s doomsday scenario. Their judgment of this government was created by the initial deception in breaking the “there will be no carbon tax introduced by a government I lead.” That will not disappear because of a few extra dollars in a pocket.

Tony Abbott certainly thinks so. He could not resist his good polling news this morning and broke the silence political leaders normally observe about such matters.

Mr Abbott said the government was in a dire position despite channeling billions of dollars in handouts to people and an expensive new advertising campaign. “This is the electoral justice that awaits governments that aren’t honest and straight with the Australian people,” he said.

What the Crikey indicators show. There’s been a slight, very slight, recent improvement in the chances both of Julia Gillard remaining Labor leader up to the next election and of her party actually winning it. 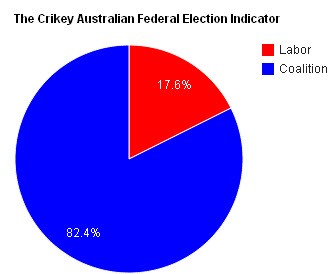 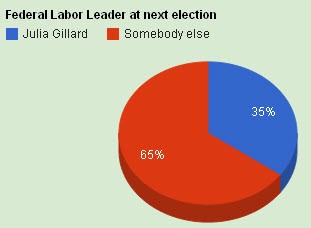 Petrol keeps edging lower. Perhaps the continuing fall in petrol prices will remove some of the public hostility. There was another drop this week. 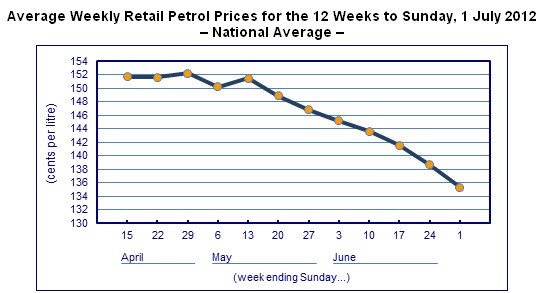 What we are paying at the pump is certainly putting an end to any immediate inflationary fears.

The TD-Securities-Melbourne Institute Monthly inflation gauge shows the annual inflation rate fell to 1.6 per cent in the 12 months to June 2012, the slowest pace since 2009. Prices fell 0.2 per cent during the month of June after remaining flat in May, the survey shows.

Waiting for James P to respond. Is this what Rupert Murdoch thinks of James Packer?

The Abbott might be Right, but it took a few elections
to catch up with his “non-core promises party” didn’t it?
Mind you Labor doesn’t have Limited News managing their PR for them either.

I can’t wait for Abbotts lies to be processed by the (admittedly slow) electorate. If Julia Gillard Is guilty of one lie, and that’s questionable. Once they get a whiff of Abbotts bullsh*t as he backtracks on just
about everything he is promising, then, we will see who the real liar is!

Badly put, can’t always read what I’ve typed, something about the way it displays on my screen!

Farmer’s tone is getting more stridently anti-Labor by the day. Is he hoping that Rupert will notice and offer work at a “real” newspaper? If Crikey could bother doing one, I’m sure that a Crikey’s Farmer Credibility Indicator would look a lot like the top graph, with blue representing “I don’t believe much of what Farmer writes any more.” or “Waste of good space”. Let’s face it, there’s more than enough journos ready and willing to write utter crap in support of Abbott and his distasteful cronies and by and large they’re a bloody sight better at it than Mr Farmer.

It seems the Libs have already backtracked on one of their promises. Remember they said they would dismantle the NBN? Well now they say they won’t do that. Obviously they relise the NBN was a winner for Labor so now they are trying to talk themself out of their previous position.
Was Tony Abbott all the way with John Howard when he told us the l i e about Wepons Of Mass Destruction?