In today's Media Briefs: after a busy week Packer turns his attention to polo ... Front Page of the Day ... Fairfax journo tells of toxic newsroom ... Murdoch weighs in on TomKat and more ...

After a busy week, Packer plays polo. It’s been a busy few weeks for James Packer. First he approved News Limited’s $2 billion acquisition of his stake of Consolidated Media Holdings and then last week he announced the further expansion of his burgeoning casino empire by going into a partnership for a new casino in the Philippines’ capital of Manila.

Meanwhile last week his polo team, Ellerston, recorded its first high goal victory in three years (we don’t know what that means either) by beating El Remanso. Unfortunately, Packer’s team couldn’t get the job done on Saturday, falling short against the might of Salkeld. Not claiming to understand the game of polo, we think Packer is in form at the moment with at least one relevant statistic in the current tournament. Perhaps any polo aficionados can drop us a line and fill us in so we can keep on top of Packer’s polo career. — Leigh Josey

Front page of the day. There’s not much good news coming out of Europe at the moment so it is somewhat heartening to share in the news today that Spain are the 2012 European football champions. Unlike its economy, the Spanish are kicking goals — four of them in fact — as it crushed a dispirited Italy who were held goalless. So today’s Spanish papers are celebrating — they deserve some respite from all the doom and gloom. And for those readers who are thinking “a football-related front page of the day, what’s with that?” Well, it could have been worse — we at least spared you from Tom Cruise and Katie Holmes: 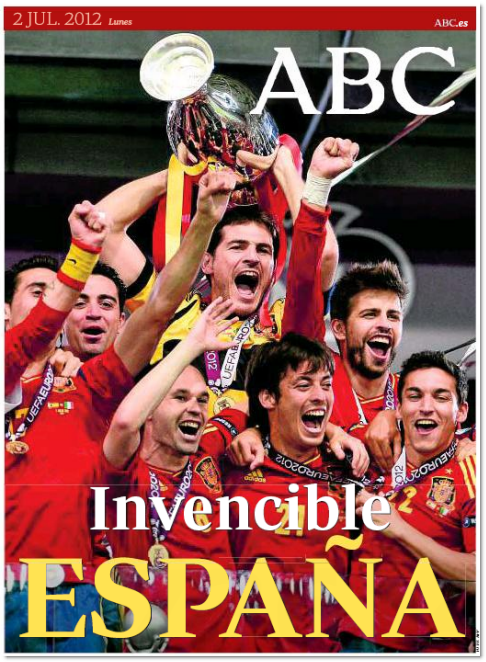 The Department of Corrections. No wonder Canada’s Globe and Mail buried this correction in the middle of its newspaper on Saturday; Ryan Gosling — for the record, they spelled his surname with two “L”s — fans are ferocious, fastidious and unforgiving.

“Fourteen days ago Fairfax announced 1900 job cuts, seven days ago the editors resigned, on Friday we received a letter from Gina Rinehart. For sadly many have fallen out of love with the Fairfax idea or feel it has betrayed them – either way the relationship has become toxic. Those people should take this chance and go.” — mUmBRELLA

Murdoch weighs in on TomKat

“Media mogul Rupert Murdoch has put his two cents in on the news that Tom Cruise and Katie Holmes are getting divorced.” — The Los Angeles Times

“With the announcement that News Corporation will be split in two, employees at the company’s many print papers are facing a new reality: they are now in the newspaper business.” — The New York Times

“The Supreme Court has turned down media companies’ plea to lift a prohibition on owning both a newspaper and a television station in the same market.” — The Washington Post

A day at the polo: when James Packer comes to play