While debate on the GST focused on the price increases that a consumer would pick up at the cake shop with their birthday cake, this time the carbon tax is all about the welfare of the humble lamb roast.

Mike Willesee: “If I buy a birthday cake from a cake shop and GST is in place do I pay more or less for that birthday cake?”

Hewson: “If it is a cake shop, a cake from a cake shop that has sales tax, and it’s decorated and candles as you say, that attracts sales tax, then of course we scrap the sales tax, before the GST is …”

While debate on the GST focused on the price increases that a consumer would pick up at the cake shop with their birthday cake — as Crikey picked apart last year — this time the carbon-tax spin is all about the welfare of the humble lamb roast.

And why wouldn’t it?  It seems it’s our Prime Minister’s favourite meal.

It’s a relevant contrast since, according to George Megalogenis in The  Weekend Australian, “the carbon tax [is] the most disruptive government-imposed change to the national economy since the GST 12 years ago”.

Today’s Herald Sun splashed with a two-page spread working out the cost increase for a family roast thanks to the carbon tax. An analysis by the Herald Sun found the lamb roast (including all the trimmings of spuds, organic pumpkin, rosemary and lashings of packet gravy …) would rise by just 27 cents to $40.80. 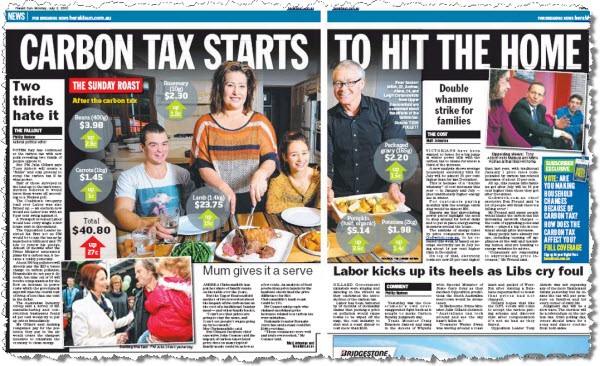 Nationals Senator Barnaby Joyce previously warned consumers that a roast could be as much as $100 over time under an emissions trading scheme. Today Climate Institute chief executive John Connor says roast lovers across Australia needn’t be too concerned since “… the impact of carbon-tax related price rises on many typical family meals could be as low as a few cents.”

Treasurer Wayne Swan was also seen at Woolworths Nundah at the weekend purchasing everyday items to dispel the opposition’s claims that grocery costs would soar under a carbon tax. 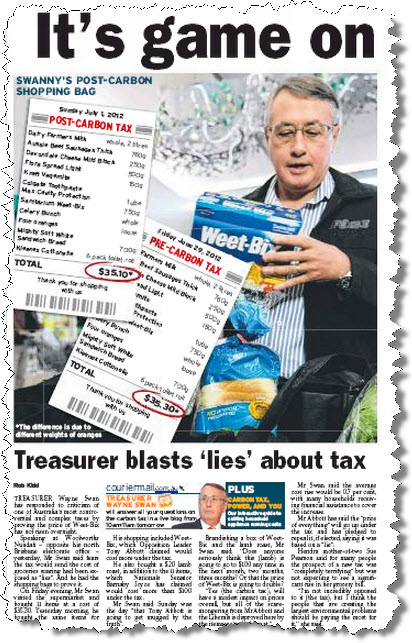 “On Friday evening, Mr Swan visited the supermarket and bought 11 items at a cost of $35.30. Yesterday morning, he bought the same items for $35.10.

“Brandishing a box of Weet-Bix and the lamb roast, Mr Swan said: ‘Does anyone seriously think this (lamb) is going to go to $100 any time in the next month, two months, three months? Or that the price of Weet-Bix is going to double?'”

As Gillard quipped to reporters yesterday: “Is the Sunday roast now costing $100? Has the coal industry closed down? Is my weekly shop now 20% more expensive? Has Australia entered a permanent depression?”

But it seems Grant Hackett’s battle with sleeping pills and TomKat’s divorce was the biggest story of the day for the tabloids yesterday, with most keeping the carbon tax off the front page. Brisbane’s Sunday Mail did run a fascinating double-page spread starring Captain Centsible (see what they did there?) offering up his tips on how different groups (families, retirees, etc) could save money and avoid carbon-tax costs.

“He is lean, fiscally mean and ready to slash your financial woes with his bare hands … and a calculator. Meet The Sunday Mail‘s masked budget-buster, Captain Centsible.” 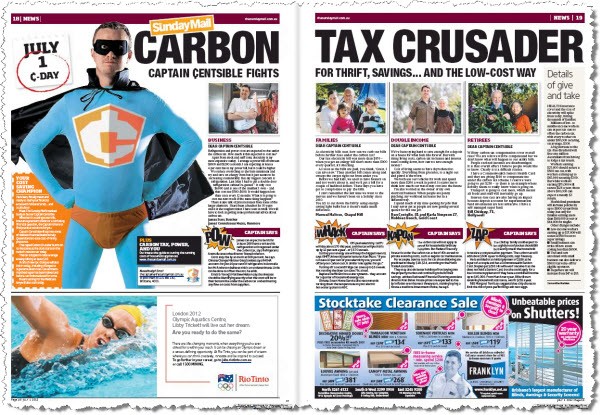 Despite the jokey attitude, much of the advice was pretty, well, centsible: cut your energy usage, replace inefficient hot water systems, apply for low-income supplements if required.

Newspaper columnists all offered their take on how the carbon tax will play out for the Gillard government in coming months. “This will be a slow burn. The GST seemed to have an easy first day but became a political nightmare a few months later. The real test for the carbon tax will be how families react when they receive their winter power bills,” wrote Phillip Hudson in the Herald Sun.

Rising power bills in recent years has made Australians cut their usage, notes Megalogenis in The Oz:

“But the dry run tells us that higher energy prices do help reduce emissions. Given that both sides are committed to reducing emissions, this may be the evidence a future government needs to persist with, or reintroduce some form of carbon pricing.”

We’ll just have to wait until the next lot of power bills start arriving to gauge voters’ reactions, says Dennis Atkins in The Courier-Mail: “Yesterday was not just one of the most important political days of the year, it was also the day nothing happened. Despite the doomsday warnings of Tony Abbott — towns wiped from the face of the Earth, family budgets ruined and $100 for a lamb roast — the world went on without drama or shock.”

Apart from the media drama, of course.

Productivity needs a shot in the arm — why not a GST boost?

Is it any wonder that we stop buying papers and instead pick and choose our info from the web?

Some of us have enough functioning neurons to find this crap offensive.

Papers have shorter runs than a stage play.
Last weeks asylum seeker tragedy is dumped in favour of the Aussie family Roast dinner CRISIS.
PUHLEES…
see what you learn from the mob’s media.

Well, someone at the S-M is a Damned fan.

Yes, Jaywhar. Ink is pretty much all carbon in a solvent. The price of papers must, inevitably, go through the roof.

And it’s not the roast leg of lamb per se; it’s all that carbon when Mum burns the buggery out of it.

To misquote king Pyrrhus “another such whammy and we are destroyed! 27 cents on a $40 roast, how much can a koala bear?”