From the Crikey grapevine, the latest tips and rumours … Pyne plagiarises. The energetic and voluble Liberal frontbencher Christopher Pyne has been caught out pilfering quotes from history in Parliament yesterday. Pyne leapt to his feet to defend John Howard’s GST against Labor claims it was like the carbon tax. “I knew John Howard and […]

Pyne plagiarises. The energetic and voluble Liberal frontbencher Christopher Pyne has been caught out pilfering quotes from history in Parliament yesterday. Pyne leapt to his feet to defend John Howard’s GST against Labor claims it was like the carbon tax.

Eagle-eyed Kevin Brianton, lecturer in strategic communications at La Trobe University, told Crikey that Pyne had no right to rip off a comment US Democratic vice-presidential candidate Lloyd Bentsen (pictured below, delivering the quote) made to his rival, Republican candidate Dan Quayle, during a televised debate in 1988. 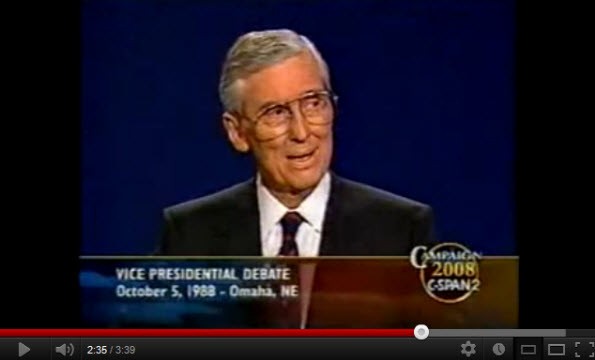 Bentsen delivered his classic line in a slow, dignified voice, and received warm applause from the audience. We’re not quite sure if Pyne nailed that one. Brianton thought Pyne erred. “If this was done by one of my students, they would have been taken to task for plagiarism,” he told Crikey.

Stop press: something happens in Gungahlin. Could this be the Canberra equivalent to the Cronulla riots? A nasty flyer has been circulating in the northern Canberra suburb opposing plans to build a mosque there. The flyer, sent by the Concerned Citizens of Canberra, says the mosque builders are not abiding by “the way Australian neighbours treat each other”.

Outraged anti-mosque types are invited to attend a “private closed-door meeting” on Sunday, with the location and time to remain a secret revealed only to those who register. So Crikey has applied to attend. We’ll let you know.

Gungahlin is a quiet hub of public servant domesticity, with cookie-cutter townhouses and roundabouts stretching as far as the eye can see — so there might not be anything more interesting going down on Sunday. Anyone want to attend and tell us the inside story? Let us know.

A Crikey reader who received a flyer in their letterbox is toying with going along, “just to see who these concerned citizens of Canberra are. Are they more like the Avengers or the Justice League?”

Our Gungahlin resident also posed the question of whether Muslims are allowed to attend — although if they’re not abiding by “the way Australian neighbours treat each other”, perhaps not.

News on News. Seen in the Queen Street deli in Woollahra, the heart of Sydney’s wealthy eastern suburbs, former News Limited chief, John Hartigan, a long way from New York, Holt Street and the big News Corp split. He was suntanned, wearing shorts and T-shirt and looking as though he was on his way home from the beach. Two rolls to go and he was gone.

Someone does need some R&R. It seems not all readers of Fairfax’s Good Weekend Magazine enjoy the extensive glossy guides to expensive holidays that regularly fill the publication to bursting.

One Peter Gibson gave a spray on GW’s Facebook page, bemoaning the use of “travel advertorial editions” filled with “pics of women lying on massage tables with mysterious black pebbles placed on their backs …”. GW hit back, defending the many multi-paged spreads because the accommodation was selected independently and paid for by GW. That failed to win over Gibson. 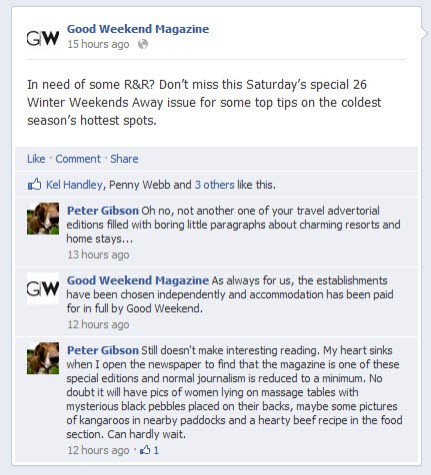 Ted quashes illness rumours. Victorian Premier Ted Baillieu has quashed rumours that he’s ill, possibly with Parkinson’s disease. Asked on the ABC today, Baillieu said the rumours were not correct, although he said he did have a tremor which had been exacerbated by a rugby incident in his youth. It seems his political enemies have been playing dirty in spreading talk of a serious illness.

I don’t know how eagle-eyed Kevin Brianton is but I am sure that there are a lot of people who recognised the provenance of the statement. I think it’s harsh to accuse Mr Pyne of plagiarism. If he can’t remember late night conversations from a couple of months ago he might struggle remembering something he first heard and saw when he was 21.

It’s hardly plagiarism if we all recognise the original quote. O God, O God, how weary, stale, flat, and unprofitable seem to me all the Crikey articles of this world!

That was a very well known quote he plagiarized .I heard it on ABC Newsradio while driving. Anyone who had taken an interest in US politics will have recognized it. If a Labour MP had done it he/she would have been ridiculed. At least if that bloviating dill Pyne has to talk crap, let it at least be original.
.

When you don’t want people to notice the similarity, it’s plagiarism. When you do want them to notice, it’s parody. To which I would add that John Howard is no Jack Kennedy, Chris Pyne is no Lloyd Bentsen, and whoever Pyne was talking to is no Dan Quayle.

Pilfering?? Bit try hard, don’t you think. This quote has been used so many times it’s a cliche – that’s all.

Guess it was your intern who wrote that entry.