The deterrent of death

If the good prospect of drowning is not a sufficient deterrent to stop asylum seekers trying to reach Australia by sea I find it hard to think what would be.

The deterrent of death. If the good prospect of drowning is not a sufficient deterrent to stop asylum seekers trying to reach Australia by sea I find it hard to think what would be. Life imprisonment in a Malaysian refugee camp? Perhaps for men but not for the women and children the Labor Government has promised not to send there and not after the agreed quota of 800 has been shipped off within a month or two at the current rate of arrivals. A few years on a barren Pacific Island like Nauru before being resettled elsewhere? Not if the alternative is waiting in a queue for much longer somewhere in Malaysia or Indonesia or elsewhere.

So I wish retired Defence Force chief Angus Houston and his two “expert” committee members the best of luck as they try and find a boat people policy that will satisfy the principles laid down by the High Court that is capable of being passed into law. I doubt that they will succeed and that means we either get used to more deaths at sea of desperate people (unless the deterrent of death finally kicks in) or follow the party of principle, the Greens, and forget the whole cruel idea of third-country offshore processing and let in many more asylum seekers than now.

Barrister Julian Burnside QC, speaking on ABC radio this morning in his human rights advocate role, seemed to me to get to the truth of the matter when he described government’s impasse over asylum seeker policy as “pathetic” and having not identified the real problem.

“I suspect that their real concern is to stop people getting here full stop.

“They say the problem is that people die at sea trying to get to safety in Australia.

“If that’s really the problem then I would’ve thought the obvious solution to it is to stop getting people on boats and the only way to do that … is for Australia to set up a fair dinkum, fair processing system in Indonesia with the co-operation of the Indonesian government.”

Mr Burnside, Fairfax websites report, has proposed an agreement with Indonesia that would involve processing boat people’s claims for asylum in Indonesia and then giving them a ticket, telling them they will be safely resettled in Australia in a number of months or years and warning them not to get on a dangerous boat in the meantime. “If you did that you’d stop people getting on boats and risking their lives,” he said, adding that we would have to increase our annual refugee intake as well.

Just a pity really that the Labor Government is prepared to use Mr Burnside as its advocate in dealing with the allegations of s-xual harassment against House of Representatives Speaker Peter Slipper but will not listen to him on asylum seekers. Ah well, we should not be surprised at the selectivity of politicians. They always will use you when your image helps them but forget you when it doesn’t.

Worry about the bottom half. A split front page to Brisbane’s Courier Mail this morning; a boat people tragedy picture on top and “huge power price rise” words at the bottom. 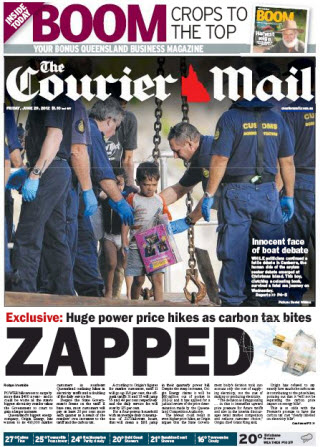 I know which half I would be most worried about if I was on the Labor Party’s re-election team and it’s got nothing to do with asylum seekers.

A Treasurer returns. You can’t keep a good snedger down. Troy Buswell is back as Western Australia’s Treasurer. 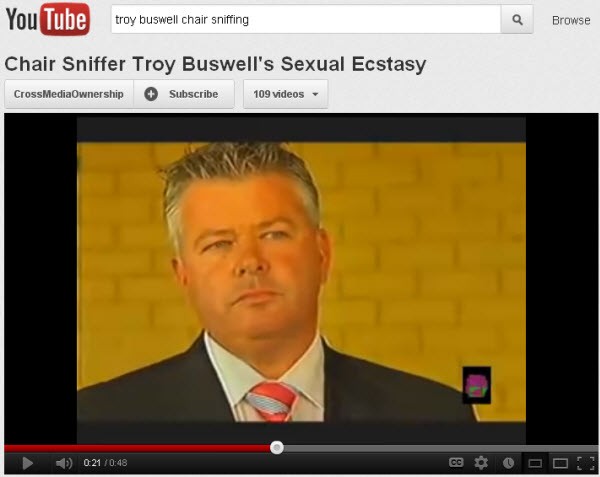 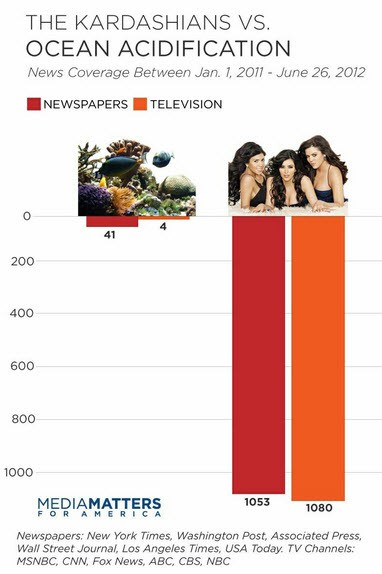 How will Gillard deal with boat people?

But you can see the bind the government is in with the obviousness of
Burnside solution – being the hot-button emotive issue it is among the
more conservative voters, the way the conservative press will press that button?

But apart from the risk of mishap at sea, there is still incentive for people to bypass the Indonesian / Australian processing centre, head for Christmas island and have onshore processing.

Once we have a regional framework operating, we make it clear to would-be asylum seekers and those who would exploit them that anyone who arrives in Australia without papers and claims asylum will be taken to one of the processing centres. This is how the ‘Timor solution’ was supposed to work. As part of implementing a regional framework, we would have to advertise this fact in some way to anyone who might think of trying to circumvent it. We would have humanitarian exceptions for special cases, but these should be rare. And as part of the regional framework we would want to ensure that packing people onto unseaworthy boats and sending them off is treated as the serious crime that it is in all countries that take part.

I find it comforting to have a progressive government in charge. Some good policies are now in place. It is a start and long overdue. Much more is required (the asylum seeker issue is one of them). I find it imperative however not to interrupt and jeopardise progress.
As a society we simply can not afford to tolerate bullsh*t from anyone! We have to speak up!

As an afterthought in regards to trolls on other threads.
Many have previously suggested not to feed the trolls. Easier said then done. How about continuing to comment on these dummies silly and repetitive contributions but making sure never to address them directly. Think that’ll work?