Mining billionaire Gina Rinehart has issued an ultimatum calling for Roger Corbett to be removed as Fairfax chairman unless he lifts the company's ailing share price by almost 60% by November.

Mining billionaire Gina Rinehart has issued an ultimatum calling for Roger Corbett to be removed as Fairfax chairman unless he lifts the company’s ailing share price by almost 60% by November.

In a scathing open letter to the ex-Woolies boss, Rinehart also accuses Corbett of hypocrisy for demanding that she sign the paper’s fabled charter of editorial independence. Corbett, she alleges, threatened to sack a former editor of The Age unless he changed the paper’s editorial direction. 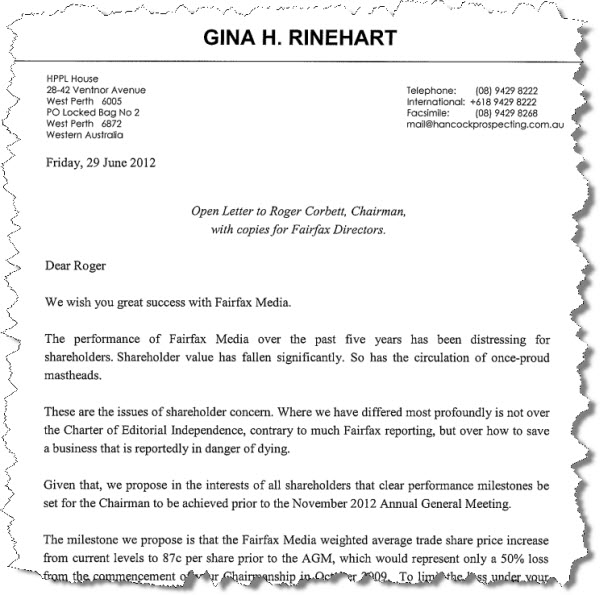 Rinehart, who wants three seats on the Fairfax board, argues that certain milestones should be met for Corbett to be re-elected at the company’s Annual General Meeting in November — including lifting the share price to 87 cents from the current 55 cents.

She also takes a dig at Corbett for wielding so much power despite only owning 0.004% of the company’s shares (compared to her 19%).

The Fairfax board officially declined Rinehart’s request for board seats on Thursday because of her unwillingness to commit to sign the charter of editorial independence.

In a statement [PDF], Fairfax taunted Rinehart to make a full takeover bid if she wants editorial control over the company’s newspapers.

“Contrary to Mrs Rinehart’s repeated assertions that this isn’t about editorial control — it is,” the statement says. “It is also about her obtaining control of the company and not paying a premium.

“If Mrs Rinehart wants control of Fairfax Media she must make a bid. Mrs Rinehart’s letter today has once and for all unmasked her motives for her continual attacks on the company and its board. Our readers are telling us that if Mrs Rinehart succeeds in this personal crusade they will abandon us. We have tens of thousands of letters and emails of support.”

In the statement, Fairfax notes that the Channel Ten share price has slumped by 63.4% since she joined the board.

Rinehart’s full letter to Corbett can be read here.

Oh, it’s so hard to decide who I want to end up losing more in this battle.

Its a simple solution for Gina to gain control . Buy out everyone else , make a formal offer . Until she does that her claims about being a white knight are rubbish . Trying to control with under 20% is a cheapskates way . If she is serious about her intentions then pay full price and if not slink away to her mine leases where others do the real work of making money . Shareholders would be dudded if Bolt type opinion pieces infected every page and deserve recompense and the chance to jump ship if Gina wants to plunge Fairfax deeper down the plughole ala channel 10 .

What can be the flag for moderation ? Impossible to know .

Its a simple solution for Gina to gain control . Buy out everyone else , make a formal offer . Until she does that her claims about being a white knight are rubbish .

Rinehart, who wants three seats on the Fairfax board

That’s one seat each for her a-rse cheeks, and a third for somewhere to put the four suitcases containing her lunch.