In today's Media Briefs: How News covered News Corp's split ... new Global MailZ ed named ... one city, one newsroom, one headline ... Vox Pop of the Day ... Front Page of the Day and more ...

New Global Mail editor named. Lauren Martin has been appointed as editor of long-form journalism site The Global Mail. An email sent by publisher Jane Nicholls to staff this week revealed Martin would be “retroactively” elevated following a dry run after Monica Attard’s controversial exit in May. When Attard departed after just 14 weeks in the hot seat, the site released a statement saying Nicholls would serve as managing editor until a replacement was found. However, Crikey understands Martin has effectively served as managing editor ever since, despite her LinkedIn profile listing her current position as “copy editor”.

Martin, an American, previously worked as managing editor of tony New England broadsheet The Vineyard Gazette, following an earlier stint redesigning the Agenda and Metro sections at The Sydney Morning Herald under John Alexander. She also served as the SMH’s film reviewer. Martin is married to Global Mail business writer Mike Seccombe and she and “Secco” moved to the States in 2006 after a stint in Canberra. The newsroom is also home to another couple – Nicholls is married to veteran politics scribe Bernie Lagan.

The new appointee holds an honours degree from the journalism school at the University of North Carolina-Chapel Hill and boasts experience on multiple US mastheads – her “American way” of editing apparently appealed to Nicholls, who spent four years toiling at People magazine in New York. — Andrew Crook (read the full story here)

#Latelinetweetgate. News Limited commentator Miranda Devine received a rude shock last night when she discovered — after the program began — that she had been unceremoniously dumped as Lateline’s guest tweeter. To make matters worse, the conservative columnist was replaced by Catriona Menzies-Pike, the managing editor of progressive website New Matilda. Here’s how the Devine Miss M covered the snafu on Twitter last night: 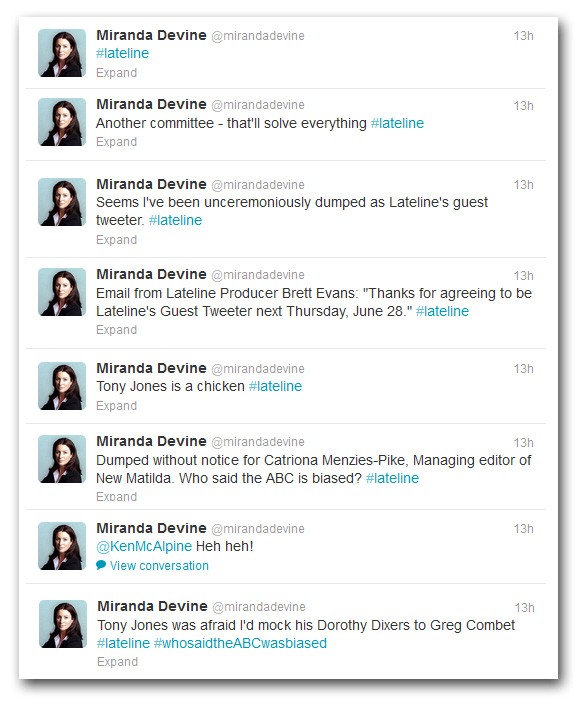 It’s unclear whether the switcheroo was a c-ck-up or left-wing conspiracy. Crikey asked Lateline‘s executive producer John Bruce for comment this morning but he hasn’t gotten back to us. — Matthew Knott 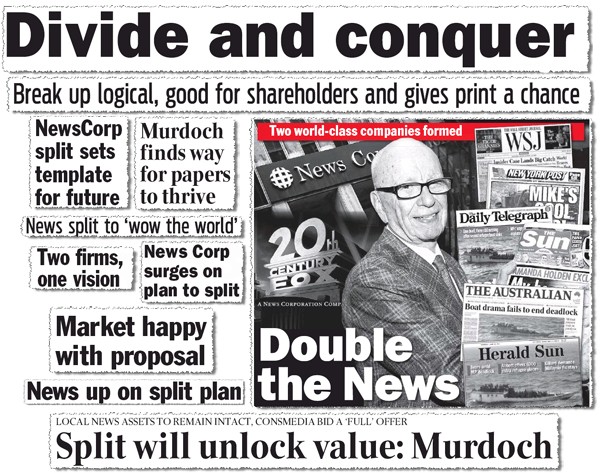 One city, one newsroom, one headline. Meanwhile, in more News news, is the “one city, one newsroom” strategy announced in last week’s News restructure, which revolves around the sharing of News Limited’s vast resources already taking effect? We couldn’t help but notice a similar take this morning by three leading News tabloids — the Herald Sun, Daily Telegraph and Adelaide Advertiser — in their front-page coverage of the latest asylum-seeker tragedy:

Front page of the day. Today’s International Herald Tribune leads with the news that the controversial American health plan, aka “Obamacare” — has survived a Supreme Court challenge and will now go ahead: 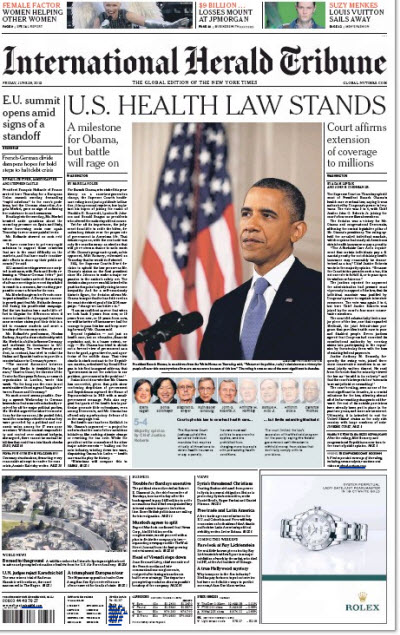 AP tells staff not to taunt CNN and Fox News

“An Associated Press editor tells staff that taunting other news outlets is ‘not the impression we want to reflect as an organisation. Let our reporting take the lead’.” — Jim Romensesko

But still nothing about those job cuts at Limited News?