A fifteen year-old copyright battle over the sale of Homer Simpson's favourite brew Duff Beer has reignited once again in Australia, with 20th Century Fox taking legal action to stop a local wholesaler from selling the famous drop.

A 15-year-old copyright battle over the sale of Homer Simpson’s favourite brew Duff Beer has reignited in Australia, with 20th Century Fox taking legal action to stop a local wholesaler from selling the famous drop. And in a twist that would make prohibitionist Simpsons Treasury official Rex Banner proud, thousands of litres of the beer are being returned in order to be destroyed.

The latest legal imbroglio first began in February, when Fox and international law firm Baker & McKenzie sent out letters to bottleshops asking them to cease and desist retail of the ale. That missive was followed up recently by a fresh letter sent out by Perth-based Allstates Liquor Wholesalers, suppliers of the beer, requesting that their customers stop selling the beer, return it to Allstates and take down any advertising material related to Duff.

Known as “The Legendary Duff Beer”, imported from German brewer Eschweger Klosterbrauerei, the red label’s design and logo looks remarkably similar to the fictional beer consumed by the barflies at Moe’s.

The letter asks that retailers cease and desist as part of a negotiated settlement between the parties, or face the consequences of legal action from the entertainment giant. A Perth-based bottle shop manager posted it to Reddit: 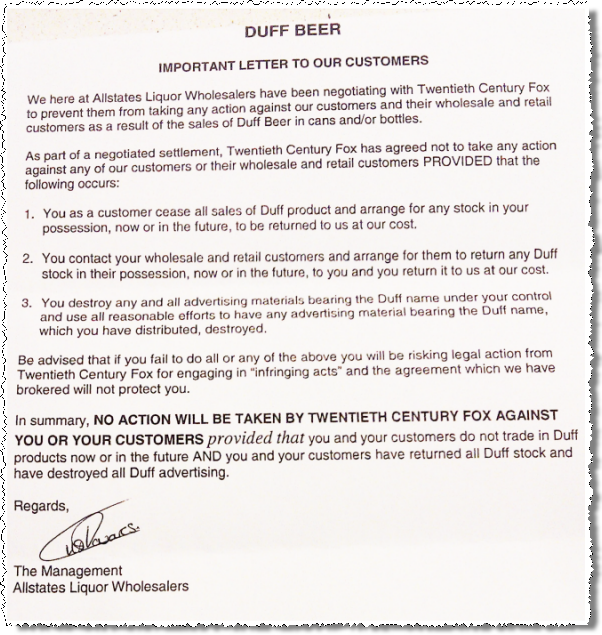 Allstates Liquor Wholesalers has already begun tipping thousands of cans of beer down the drain, with all related material set to be destroyed.

The company declined to comment on the legal matter, however it is understood most of the beer has made its way back to Perth to be destroyed. It has been suggested the matter could cost the company $2 million.

Nillumbik Cellars manager Daniel Dipietro in Victoria says he hasn’t seen the legal letter, but had heard there were some problems over selling the beer. He said the cans, which sold for $40 a slab, were selling pretty well.

“I know we can’t get any more of it,” he told Crikey. “They are going to be a bit of a collector’s item we believe, it might generate some sales for us.”

In 1996, Fox successfully took South Australian Brewing and Lion Nathan to the Federal Court over a version of Duff  beer they were selling. Cans of the Lion Nathan Duff are now selling on eBay for up to $80 each.

Baker and Mackenzie and 20th Century Fox were contacted for comment but did not respond by deadline.

I don’t know why it is necessary to pour the stuff down the drain. Why not just paste some new labels over the tinnies?