From the Crikey grapevine, the latest tips and rumours … SackWatch: News Limited. The first reports are filtering through of how media sackings are being handled by News Ltd and Fairfax. With hundreds of journalists and subeditors expected to lose their jobs in the coming months, some of the first cabs off the rank were […]

SackWatch: News Limited. The first reports are filtering through of how media sackings are being handled by News Ltd and Fairfax. With hundreds of journalists and subeditors expected to lose their jobs in the coming months, some of the first cabs off the rank were at News Ltd, which this week announced 70 redundancies from its digital platforms. At one publication affected, online staff were summoned to a meeting on Tuesday and told almost all their jobs would be axed, although some staff understood they may continue in other roles.

Final decisions on this are expected by July 20. Other staff were not in the meeting and nothing was said officially, but sources reported it was pretty clear what was going on, and the mood in the office was sombre.

SackWatch: Canberra Times. Crimes journalists were being ushered into a meeting this morning to hear what Fairfax management has in store for them. We’ll let you know the outcome tomorrow …

APN mags unit shakes up staff. APN is quite proud of its profitable educational media unit — the wing of the media company that produces Aged Care Insight, Nursing Review, Education Review and industry stalwart Campus Review — but some staff are worried about a recent staff shake-up. Managing editor Annette Blackwell left six weeks ago and has been replaced by media professional and automotive guru John Cadogan. Senior journalist Susan Woodward and acting editor Jennifer Bennett have also left. Our insider worries about the experience of those being brought in. And what’s more:

“Word is staff are concerned the publications are being dumbed down, ahead of simply being closed down. It’s a pity, although we guess staff at some of the universities and government departments that Campus has targeted over the years won’t be too sad. Readers, including those who have signed up for pricey institutional subscriptions, might feel a bit differently.”

GM David Williams confirmed the staff moves today but insists “categorically” there are no plans to close publications. “On the contrary,” he said, “we are in the process of launching a new title, Education Review Tech Guide, which goes on sale in August. We are actively looking to recruit fresh new talent to pursue the significant growth opportunities in our markets.”

A fracking good show for action. A “fracking good time” is promised tonight at the Lismore Workers Club for the world premiere of new stage show CSG: The Musical. According to the program:

“The musical has been developed over the past few months by community members under the direction of Ollie Heathwood. The show tells the story of how CSG drilling can directly impact upon local residents and the environment — and more importantly, according to Heathwood, ‘how people can bond together to create the strength to maintain their environment, their values and their communities’.”

Takes community lobbying to a whole new all-singing, all-dancing level. The show runs until Sunday. Let us know what you think, people of Lismore.

Which bank sent the media a tomato? Yes, we know we’re playing into their trap. And we’re not going to mention the bank responsible. But as press kits go this is at least unique … 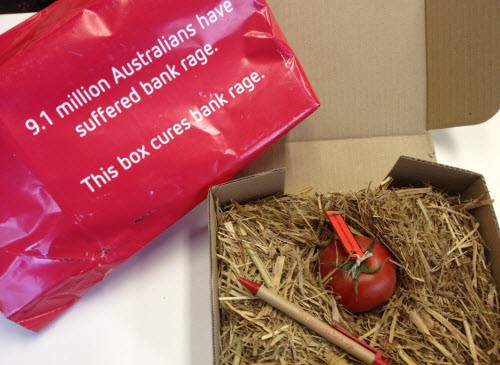 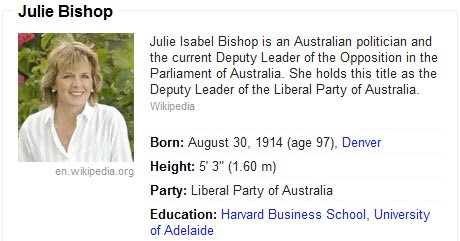 Gee isn’t that an old picture though?

“… journalists and subeditors …” — FFS this is such an old error. Reporters, feature writers, editors and sub-editors are all journalists.

Needs to be updated to the “Ballroom” photo in Canberra and then 97 might be correct.

It seems that Wikipedia confused our Julie Bishop with the American actress of the same name (born 30 August 1914).