In today's Media Briefs: Barry booted for Buddha ... Domestic violence comedy gold at Stock & Land ... Why the US tuned out of CNN ... Front Page of the Day and more ...

Guy Dobson, head of Metro Radio at SCA told Crikey: “As the largest landholders of digital radio spectrum in Australia … were going to start experimenting with the spectrum and various formats over the medium term.”

Barry, which ran under the tagline “mildly amusing radio”, could be construed as a loss to the Australian comedy scene. However, industry sources said this morning that so few people listened to digital radio that its demise wouldn’t register.

Yesterday, completely by coincidence, Buddha was playing Hong Kong by Gorillaz, which seems appropriate given the lyrics:

Domestic violence comedy gold at Stock & Land. In case you were worried that recent turmoil in the newspaper industry meant there was no room for wife-bashing gags, the Fairfax-owned Stock & Land has some good news on page 40 of today’s edition.

Why the US tuned out of CNN. It’s end times, not merely for the print media. In the US, pioneering 24/7 news network CNN has just posted its lowest ratings in the past 21 years — that is, since the Gulf War, when it rose to sudden prominence as the global news source. Now it is averaging a pitiful 440,000 total viewers — in a population of 220 million adults, or a 0.2% rating — and a mere 120,000 viewers, 0.05%, in the 25-54 age group. That’s not viewers at any one time, that’s the total number of regular viewers. In other words, one American in 2000 between the ages of 25-54 watches CNN, and the remainder are retirees with a lot of time on their hands.

The silver lining? The worst drop of all was in the Piers Morgan show. Morgan, a preening, shallow, former Daily Mirror editor, boned for running faked photos of alleged British army atrocities in Iraq (thus discrediting the genuine campaign for some quick sales), took over the show from the sainted Larry King after the maestro’s retirement in 2011. It was a bizarre choice. King could be daffy and simplistic at times, but he was a great interviewer — warm, pacy, engaging, liberal in the best sense of the word. Morgan is the type of person end-times Fleet Street produces — lacking not merely morals, but any idea of morality. In interview after interview, he communicates only sycophancy and shallowness. Consequently, he’s lost a third of King’s handover audience, in the network’s flagship show.

CNN’s problem is that it bends over backwards to be centrist (of the centre-right on a global scale, or North Korean, according to the US Right), and is therefore boring, in an era when those seeking news can buzz across a dozen sites on the nets, rather than waiting for an anchor to ponderously explain the situation.

Still struggling, but less affected are the partisan news channels — Fox on the right with 1.78 million viewers (down from 3 million just after the Obama inauguration), and MSNBC on the left with 690,000 — a good figure for a channel well to the left of anything you’d find in Australia. Fox sorta wins, but its 25-54 demographics are shocking — only 250,000 in this demographic, a one in seven ratio to, well, angry codgers. MSNBC has a one in three ration with 200,000 viewers.

Does that mean people drift to Fox as they get older, and the cerebral arteries narrow? Or will its ratings die as they do, and no one replaces them? — Guy Rundle

Some Talent advice for Seven’s new boss. The first big test for Seven West Media’s new CEO Don Voelte will be what to do about Australia’s Got Talent, the network’s dying talent show that failed to get more than a million metro viewers last night for its second-last program of this series. Will Voelte listen to Tom Worner, the network’s head of TV?

The decision won’t be needed until after next week’s grand final. That might attract 1.4 to 1.7 million — respectable, but not a killer final effort for the year. The final averaged more than 2.9 million viewers in 2011, and the series averaged 1.936 million viewers and was the highest-rating regular program on TV.

So Mr Voelte: based on your long experience drilling for oil and gas, looking at seismic maps, reading production reports and worrying about well-head pressures and the dangers of blowouts, what will you do for Australia’s Got Talent? There’s lot’s of experts in the media when the going is good, but few when it gets tough. — Glenn Dyer

Front Page of the Day. Who would have thought that rabid UK tabloid the Daily Mirror could produce such a charming from page of the historic meeting between the Queen and former IRA commander Martin McGuinness … 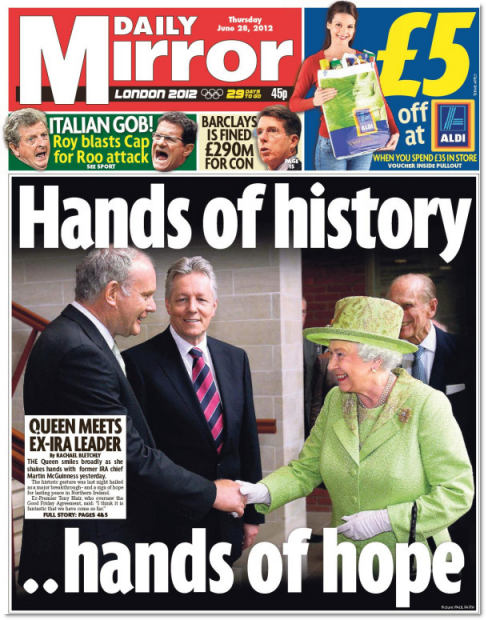 “News Corp CEO Rupert Murdoch will be interviewed by Neil Cavuto tomorrow. Murdoch is reportedly moving toward splitting News Corp into two companies, one for the publishing assets and another for the television assets. An announcement is expected by the end of the week.” — TV Newser

“Mexico’s television network Televisa has accused the Guardian of intimidation after fresh revelations about the company’s links with the presidential candidate Enrique Peña Nieto caused an online furore in the run up to Sunday’s election.” — The Guardian

“Amid the celebrations that greeted the declaration of a winner in Egypt’s first freely elected presidential vote, a British student journalist was s-xually assaulted by a mob in Tahrir Square.” — CNN

Journalists have always complained about technology

“The glory days are always behind journalists. And when trying to explain why the present is eternally a degraded form of the past, the blame usually goes to the communications technology that the future will consider indispensable.” — The Atlantic Wire

Can’t show this: exactly how the Olympics protects the value of its broadcast