Sackwatch: cuts start at News, Fairfax. Crikey hears that Fairfax’s redundancy machine will fire up next week, with 70 editorial redundancies expected at The Age and The Sydney Morning Herald. The Australian Financial Review Group has a 10% staff cut target — with 25 editorial staff set to depart. Staffers were told at a meeting yesterday that voluntary redundancies will be offered first, a development understood to have excited some of the paper’s ageing scribes. The Fin’s three-person events team, we hear, has also been given an ultimatum to move to the paper’s Sydney HQ.

Meanwhile, over at News Limited the company is launching into the digital age by … slashing digital staff. About 100 News staffers have already been made redundant, 70 of them from digital platforms, as Kim Williams centralises the company’s website operations. Seventeen editorial staff at the Gold Coast Bulletin have lost their jobs, as have eight subeditors each at the Cairns Post and Townsville Bulletin, according to the Media Entertainment and Arts Alliance.  — Matthew Knott 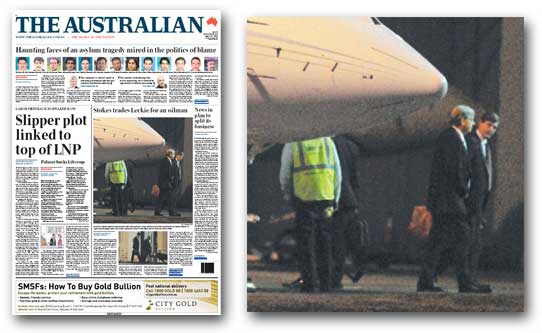 We think that’s ex-Seven CEO David “f-cking” Leckie getting off a private jet with Peter Gammell and below that, incoming CEO Don Voelte making tracks with Ryan Stokes. Nothing to do with Seven proprietor Kerry Stokes’ plans to block News Limited’s $2 billion takeover of Consolidated Media Holdings at all. Then, in today’s Strewth section, we discover snapper Stuart McEvoy trespassed on Fairfax property to grab new Age editor Andrew Holden and Garry Linnell lingering outside the 3AW studios at Melbourne’s Media House.

Other recent triumphs include last week’s pap of since-ejected Sydney Morning Herald editor Peter Fray biting his tongue as he got into a Sydney cab following Greg Hywood’s cost-cutting announcement, while just two days later News CEO Kim Williams was pictured sitting serenely at his Holt Street desk after flagging his own cuts. 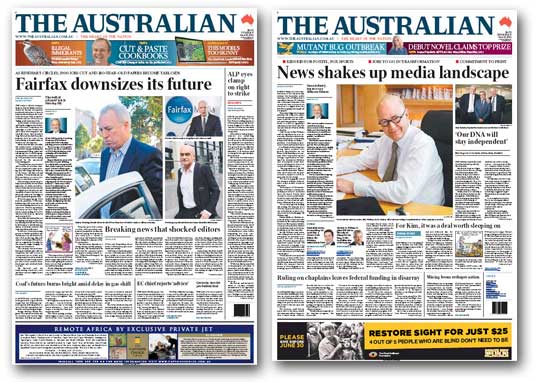 Who said print was dead? (not News, obviously). — Andrew Crook

“TIMES must be tough for one female executive who was spotted waiting patiently in Woolies for the staff to reduce the price of the bread.

“Knowing that the price drops at a certain time she was heard harassing staff to hurry up and mark it down as she had an appointment to make.

Patience is a virtue, but I am not sure Reggie and Pete know what it means. — Andrew Crook

Wordsmiths revolt: SBS kills L&N. SBS is killing off Letters and Numbers (6pm, SBS1) and will substitute a UK series called Countdown, which is the model for L&N. SBS says L&N is being “rested”, proving that the weasel words of commercial TV spin have infiltrated the state-owned broadcaster. The reality is that L&N is being killed off, undoubtedly for cost reasons.

Countdown is a Channel 4 program and was the first program broadcast on that network in the UK in 1982. That means there are more than 5000 episodes for SBS to use, cheaply. Letters & Numbers ends this Friday. It wasn’t a ratings hit (128,000 last night) but for wordsmiths it had its charm. L&N allowed those who do the Friday crosswords in The Sydney Morning Herald to identify their tormentor and author, David Astle (a member of the program’s team) and prepare our revenge for his crosswords’ infuriating complexity.

In some ways the fate of L&N is like the cuts to the number of episodes of Foreign Correspondent: a cost saving that a weak management won’t admit to. The use of cheaper programs in or around the timeslot confirms the cost saving nature of the move. That SBS is going to use a British program instead of local content is pretty appalling. — Glenn Dyer

Correspondent: the NY Times killed me. When US star reporter Anthony Shadid and UK legend Marie Colvin were killed covering the brutal bombardment of Homs by Syrian government forces, there was a huge outpouring of tributes to the brave war correspondents who speak truth-to-power, first casualty, etc — and only a small counter note, wondering if they had stayed too long for a story well established. That is, that Assad was pounding Homs to bits,  and serving the myth of the war correspondent, for diminishing story returns. That argument — Robert Fisk was the most credentialed to make it — was generally shouted down as an insult to the dead.

Now, however, it has a new champion — the late Anthony Shadid. According to Shadid’s cousin, Ed Shadid. He reports that Anthony told his wife the day before he returned to the zone that “if anything happens to me I want the world to know that The New York Times killed me”. Ed reports that Shadid had a screaming match down the phone with NY Times editors about his safety and his health issues (he died of an asthma attack in Homs, not from wounds). Of course, he was an A-list reporter and could have refused to go — on the other hand, it is not exactly a propitious employment environment to go pissing off your editors.

The Times issued a pro-forma denial of the accusations, but Ed Shadid is sticking by them. Developing, as they say. — Guy Rundle

Front page of the day. Turkish newspaper Today’s Zaman covers the escalating conflict in Syria as border disputes erupt between Turkey and Syria: 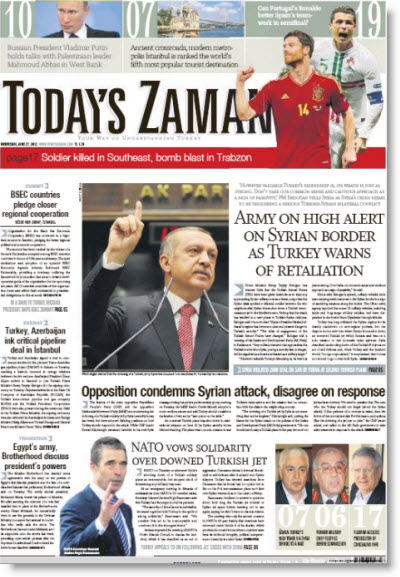 “The Wall Street Journal on Tuesday said it had fired an intern who it says fabricated sources and quotes just three weeks into the job.” — The New York Times

“ABC fans will soon be able to watch Bananas in Pyjamas on the bus as the broadcaster today unveils its online viewing platform on iPhones and prepares to provide a live stream of its 24-hour news channel on YouTube.” — The Australian

“From Facebook’s company obsessed culture to its rowdy company parties, a former employee is airing some of the social network’s dirty laundry in a new book that was released Tuesday.” — CNBC

“One of France’s best known journalists has been sacked for writing too many ‘offensive’ articles about Valerie Trierweiler, the new first lady, it was claimed yesterday.” — Irish Independent