Fairfax metro staff are bunkering down to hear their boss, Garry Linnell, outline what he says is "the most significant editorial transformation in this company's history".

Fairfax staff were bunkered down this morning to hear their metro boss, Garry Linnell, outline what he says is “the most significant editorial transformation in this company’s history”.

The ailing media giant’s jargon-heavy national “Editorial Review Project” — that led to the unprecedented “resignations” this week of three senior editors — was formally communicated this morning to Age journos, many of whom are keen to take swift advantage of their firm’s swingeing voluntary redundancy program.

In a explainer circulated internally today, Linnell waxed lyrical on the “extraordinary times for all of us and they demand extraordinary people and collegiate effort to steer us through a period of uncertainty and unprecedented change”.

He said that senior editors had worked alongside 100 other colleagues on the masterplan to “take our journalism into a new era”.

The cost-saving rationalisation came with a 30-page PDF detailing how the former Daily Telegraph editor will remove duplication, over-commissioning and “editor shopping” — a time-wasting practice in which rival editors apparently source similar stories on the same issue.

Local editors-in-chief — including Sean Aylmer in Sydney and Andrew Holden in Melbourne — will hold ultimate responsibility for content across print and digital, while their “platform agnostic” news directors, Darren Goodsir and Steve Foley, will be required to man the newsdesk from “6am-Late” seven days a week (with the assistance of deputies).

Something called a “follow-the-sun” model will be employed, presumably not a plea for hacks to mimic the malfeasance at beleaguered News International tabloid The Sun. According to Wikipedia, the term means marshalling people in different timezones to create content when they are awake, cannily enabling websites to updated in the middle of the night.

“Platform editors” will tailor content for Fairfax papers, the website, tablets and mobile apps and will draw on reports submitted to agnostic “topic editors”.

“Topic-based reporting teams” will focus on areas of “core journalism” and the topic model will also be mimicked at the national level. Disturbingly for some journos, topic reporters will be expected to file through the day with the fruits of their keyboards available on an internal wire system.

While the traditional “print first” model will be junked, separate editors of the Monday-Friday Age, The Saturday Age and The Sunday Age will be maintained, according to an accompanying workflow chart. 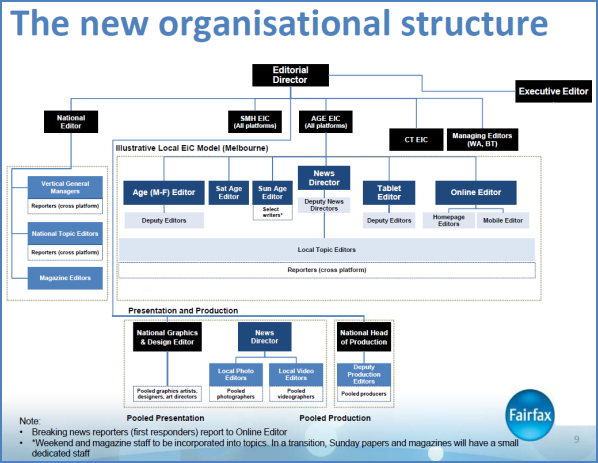 One senior Age scribe dismissed the plan this morning, telling Crikey it was top-heavy on management appointments. “Too many editors, too few reporters,” they said. On Twitter, crack investigative hound Kate McClymont mocked the announcement, asking AFR data whizz Edmund Tadros what “topic area … I will be in? Also no more ‘editing shopping’ we’ve been told.”

Meanwhile, the Media, Entertainment and Arts Alliance, in a memo to editorial staff, has outlined that the mastheads’ voluntary redundancies round — slated to cost the company more than $200 million across the group — will start in mid-July and run for four weeks. About 70 editorial positions are expected to be junked at The Age and The SMH. Ten per cent of the Financial Review Group’s editorial will be hived off, equating to about 20 hacks, while The Fin’s three-person events team will have to move to a central location at Pyrmont. In total, 1900 positions will go out of Fairfax’s bloated 10,000-strong staff base.

The union has requested payment estimates and financial advice to be provided to Fairfax staff eager to jump ship. It also wants clarification on the future of The Canberra Times‘ federal parliamentary bureau and the future of company’s suite of foreign bureaus. Crikey understands it is highly unlikely another foreign appointment will be made that involves the relocation of an entire family to an exotic location, a package that often includes the provision of school fees and accommodation. Instead, hungry juniors fresh off the backpacking circuit will be drafted in a low-cost quasi-stringing arrangement.

Age and SMH house committee members have repeatedly asked highly paid managers and executives if they would sack themselves or take a pay cut to save shareholders’ money, however those pleas have met with a frosty response. As reported in Crikey yesterday, national stopwork meetings will be held tomorrow following today’s editorial convergences (to be repeated tomorrow in Sydney and Canberra).

Crikey left a message on Garry Linnell’s mobile phone this morning in an attempt to clarify some of the strategy, but he did not immediately return the call.

Is that your opinion, Andrew?

Crikey has five staff defined as “journalists” and three editors…

I suppose from that standpoint 10,000 staff appears “bloated”, but of course Crikey exists by feeding off the MSM.
I know nothing about Crook, but it’s typical of Crikey to act exactly like the MSM by ignoring queries like mine above. I note that Crook facetiously replies to Rossmcg – Treating commenters like trash is so very Crikey…

We shouldn’t expect too much from a tiny organisation, but less hubris and hypocrisy would be a start…

At least Frank’s comments survive … my complaint about the use of the pejorative “hacks” and suggestion that Crikey and others are quietly enjoying the discomfiture at Fairfax and News seems to get moderated. Some people can dish it out but they can’t cop a bit back.

This is quite unlike Crikey and distinctly weird: first several innocuous comments by others are deleted, then this query from me today was also removed:

“Strange: there were five or so comments by other people here yesterday. None were in the least offensive- including one by Andrew Crook replying to one comment (“oooh, cutting, Ross”).
Why the deletions? Change of policy?”

As Rossmcg says, his comment merely to criticise the use of the work “hacks” to describe journalists.

So what is going on, Crikey? Highly inconsistent- Crikey usually has a thick skin, as I do. Is this the new editor’s doing perhaps? Or Mr Crook? or what?