Jason Clare the big mover due to asylum seeker tragedy

Home Affairs Minister Jason Clare races to third on our chart via his announcements on the asylum seeker boat tragedy.

Home Affairs Minister Jason Clare races to third on our chart via his announcements on the asylum seeker boat tragedy. PM Gillard and Opposition Leader Tony Abbott retain their top slots, in the main because the tragedy highlighted the homogenisation on policy by both major parties and the lowest common denominator approach to politicking “while people die”. With tragedies like this it’s also worth noting the temporary tabloid treatment of boat people as people rather than welfare guzzling, queue jumping moochers.

Staying with asylum seekers, Bob Carr’s stocks remained high as he reported on lawyer Melinda Taylor’s well being in Libya and defended claims the government had not protected WikiLeaks founder Julian Assange to the best of its abilities — as the latter sought refuge in Ecuador to avoid extradition to Sweden and the largely unfounded threat of onward extradition to the USA for conspiracy.

Greens leader Christine Milne returns to our Top 20 by accusing Gina Rinehart of trying to destroy parts of the media in threatening to sell her recent Fairfax acquisition if not given greater control through a supersized three seats on the board. And in her final appearance here, Mary Jo Fisher steals 12th place. 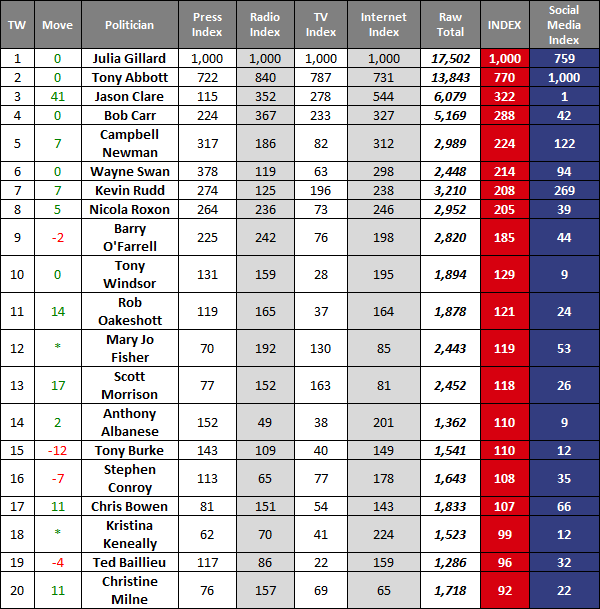 We can hardly claim it was against the odds, but taking her 22nd consecutive victory on a foreign track remains a gobsmacking result.