From the Crikey grapevine, the latest tips and rumours … Grassroots rooted. Labor might be toying with giving more power to grassroots members but not everyone has heard the message. Questions are being asked about why ALP powerbrokers including federal MP Martin Ferguson cancelled a meeting in Melbourne on Sunday, which was supposed to discuss whether […]

Grassroots rooted. Labor might be toying with giving more power to grassroots members but not everyone has heard the message. Questions are being asked about why ALP powerbrokers including federal MP Martin Ferguson cancelled a meeting in Melbourne on Sunday, which was supposed to discuss whether the ALP should endorse candidates for the Darebin Council elections, or retain the existing policy of allowing any ALP member to stand.

Crikey hears text messages and phone calls went out at the last minute to cancel the meeting, but did not reach everyone, so some disappointed ALP card-holders turned up at the Darebin Community Health Centre for nothing.

Our tipster suggests the meeting was cancelled because of a small group of protesters campaigning about climate change, ALP link to developers, etc. Apparently some protesters saw the move to change the policy on council elections as a power-grab by Ferguson to install Labor puppets on the council.

“At least [those who attended] got to chat with the protesters, who were equally disappointed,” our insider said.

“So much for the all new grassroots push with the ALP! At least some people made new friends.”

Cutbacks at QBE. As jobs fall in swathes in areas like manufacturing and media, we hear the insurance sector is not immune. A source tells us market giant QBE has “quietly reduced its staffing in a death by a thousand cuts — closing call centres, centralising claims areas and sending jobs to Manila …”.

Our industry insider said dozens of Sydney staff were the latest to leave amid unwillingness to move to the new Parramatta building, due to be opened late this year. Last year it was reported the company had made up to 200 IT jobs redundant.

A spokesperson for QBE said the company had “recently undertaken some structural changes and as a consequence less than 100 roles have been made redundant in Australia”.

Less Manne-power at La Trobe. Arts students at La Trobe University hoping to do Robert Manne’s by invitation-only Politics in the Twentieth Century pre-honours subject may be out of luck. Manne has confirmed rumours he’ll be leaving his teaching role at the end of the year, telling Crikey he had long planned to retire from teaching at 65. “I’ve done enough of it, but I love it, I’ve always enjoyed it,” the hallowed academic said.

Manne said reports that ill health had affected his decision were not correct. The left-leaning intellectual plans to retain ties with the Bundoora-based campus via its “ideas and society” program. Manne is currently just 0.1 FTE at La Trobe (that’s one day a fortnight, folks).

The ABC pendulum. So perhaps the ABC is a little more sympathetic to the ALP than the Coalition after all. Crikey is compiling a list of former ABC staff who ended up as politicians (or candidates) for a political party, and thanks to a flurry of tips from Crikey readers — some of whom, like elephants, really don’t forget — we’ve had a late surge to Labor.

The list currently stands at 15 ABC types who’ve gone to Labor and 13 to the Coalition, but we’re sure Crikey readers will come up with some more names. And can it be really true that no ABC type has ever run as a Greens candidate? What would The Australian say? Help us update the list.

The curious case of the missing toilet. The Nationals might want to get rid of Rob, but did they have to get rid of Rob’s toilet? The Nats are running a “Get rid of Rob” website to entice people to donate to their campaign to win back Oakeshott’s seat of Lyne. As Crikey reported yesterday, the website originally featured an image of Oakeshott sitting on a large novelty toilet (see below).

Curiously, the website’s image has now been altered to obscure the toilet. Is this because of a protest by Micah Challenge Australia, the group that organised the toilet stunt outside Parliament House to draw attention to the plight of the 2.5 billion people in the world who don’t have access to decent sanitation?

Micah sent a statement to Crikey criticising the use of the image, which contained the memorable line: “As well as Mr Oakeshott, WA Liberal Senator Michaelia Cash was also photographed on the toilet at this event, expressing her support for the same cause.” That’s not the kind of sentence you hear every day.

Fairfax fun. At least one Crikey reader has been having some fun with the bid for editorial influence at Fairfax by mining magnate Gina Rinehart: 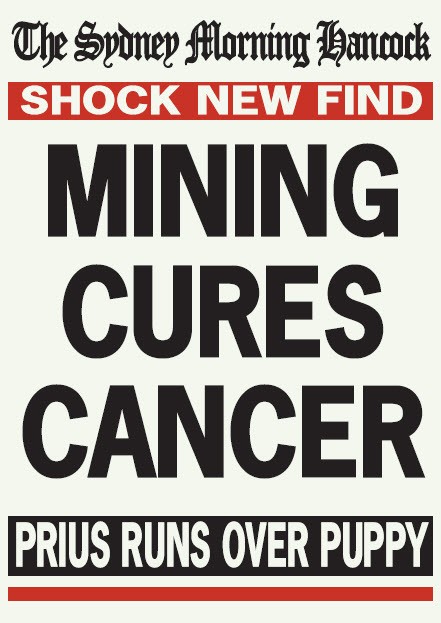 Hardly a scoop re: insurance, since suncorp and IAG have both announced much larger numbers of job cuts this year