PNG poll: minding the gap between promises and delivery

You can tell it is election time in Papua New Guinea. The country has sold out of loud hailers and the battle for public spectacle supremacy is on, Catherine Wilson, a freelance writer and journalist, reports from Port Moresby.

You can tell it is election time in Papua New Guinea. The country has sold out of loud hailers and the battle for public spectacle supremacy is on. In Port Moresby, convoys of four-wheel-drives festooned with palm branches and posters overtake each other in the city’s traffic, flashing their brake lights as loud hailers belt out their spectacular promises.

In a nation where cultural traditions and political allegiance to clan and local community remain strong, elections have functioned primarily as struggles between these social groups for power over wealth and resources, rather than polemical contests centred on policies. Community leadership has, for generations, been determined by the wealth and status of “big men”.

During 37 years of independence, the Westminster parliamentary system has had a hard time competing with the continuity of “custom” and tribal ways of governance. This is one factor in explaining why all governments since independence in 1975 have been coalitions with no party gaining enough seats to hold power alone, and the high turnover of up to 60-80% of politicians at elections.

Following a 10-month leadership struggle between prime ministers Sir Michael Somare and Peter O’Neill, the electoral contest will be fierce this year with a record 3435 candidates and 135 female candidates, the highest number since the first post-independence elections in 1977, aiming for only 109 seats in parliament. Stakes are also high as revenues from large resource extraction projects, such as PNG LNG, which is predicted to double the nation’s GDP, will exponentially increase over the next few years and access to power will mean access to prodigious wealth.

But as the nation begins to vote, the atmosphere in Port Moresby is laid back. Electoral commissioner, Andrew Trawen has announced preparations are now complete to deliver an organised election. Meanwhile, people at the grassroots have been calmly listening to campaign messages with a healthy dose of cynicism.

The nature of campaign rallies, somewhere between an agricultural show and carnival, are very much about the show. Candidates sweat it out delivering forceful and dramatic performances while potential voters sit back on the grass with umbrellas and an Esky or two full of drinks.

There are 46 political parties registered in Papua New Guinea, but candidates’ literature reveals many common policies. Nearly all are campaigning for good infrastructure, free education, better health services, water, electricity, proper housing and action against corruption. All are anxious to press home their campaign position of being at one with the needs of “the people”.

Margaret Loko, who assisted with co-ordinating the development of the Equality and Participation Bill, which reserves 22 seats in parliament for women and is yet to be passed into law, is contesting the seat of NCD (National Capital District) governor, supported by the National Alliance Party. She is one of many who firmly believe that true development in Papua New Guinea will not occur until women have greater political voice and representation. 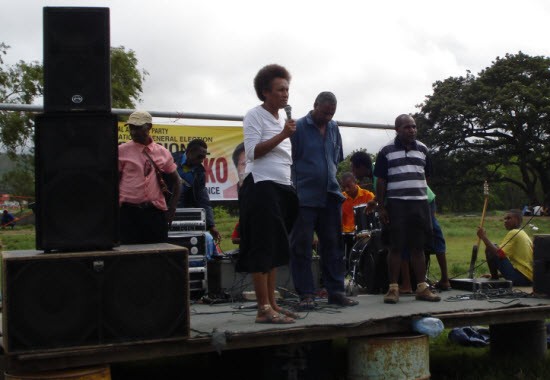 “I am trying to respond to the cry of the people in informal settlements and the informal sector,” she said. “They get abused by everybody. This is a people struggle and women are at the centre, so I am putting women at the centre of my policies.”

No one has a problem with candidates’ policies, but it is the lack of delivery after MPs are elected that is the issue and, to date, has left communities no better off than they were five or 10 years ago.

Residents of Burns Peak informal settlement in Port Moresby explained: “The big problem is water. We have to collect water from several kilometres away. Most of the services are not working and people live by the informal economy and market.

“Our settlement is underdeveloped. We do not have a proper water supply, sanitation or jobs. We need schools and help with securing land tenure.”

“Many people feel that if we keep putting male candidates in [to parliament] we will continue to collect water in buckets,” emphasised Cecilia White Wollom, resident of 9 Mile settlement and a candidate contesting Moresby North East.

The hurdle for any sincere candidate, including women, is vote buying and bribery. For decades, pork-barrelling, the offering of money, free beer and pigs by candidates to constituents has been seen as critical to securing votes at the ballot box.Jeff, who sells mobile phones at Boroko market, claimed: “We are trying to choose who will be a good leader, but candidates keep offering money. The election is going well, except for the vote buying.”

In the last week of campaigning, a candidate gave 2000 kina to a community in the south of Port Moresby to finance a free pig feast in the hope of guaranteeing voters’ allegiance.

But, according to Cornelius and Ruben, students at the University of Papua New Guinea, voters’ behaviours are changing. “People are smart now, they still accept bribes, but they vote for who they want. Voters are better  educated and aware,” they said.

Reflecting on past elections, Cornelius explained: “The difference is that in the past people blindly chose leaders. People did not understand the role of their elected leaders. Today many have background knowledge.”

They also believe the public has a more informed grasp this year of the limited preferential voting system, which was introduced at the 2007 election, and allows voters three choices by indicating first, second and third preferences on ballot papers.

While the chances of free and fair voting look promising in Port Moresby, the terrain is more difficult in the Highlands where the majority of the population live, many in remote rural communities with inadequate communications and road infrastructure. Here, monitoring election behaviour presents immense logistical challenges. This year the Electoral Commission has dispatched 30,000 polling officers and 4700 polling teams to 9800 polling stations in rural areas, while transport and logistical operations are being supported by Australian and New Zealand troops.

Complicating the scenario is that as the National Research Institute (NRI) reports: “There is no such thing as a secret ballot in some parts of rural PNG, where voting is largely a collective exercise. Whilst the law spells out international norms, in reality an ‘open ballot’, rather than a clandestine secret ballot, actually feels more democratic to many people, especially in the Highlands.” In a move to combat bloc voting and corruption of ballot boxes, myriad new security features have been applied to voting papers which, according to the Electoral Commission, cannot be manipulated.

But the NRI concludes that “even with the best management and technology available, there is likely to be ongoing major problems with PNG elections until there is more voluntary compliance with the rules of fair play”. This, the institute recommends, will mean working closely with communities to develop more incentives to play by the rules than to cheat.

Back in Port Moresby, Ruben is still facing a dilemma at the ballot box.

“We want to choose the best leaders, but we still don’t trust any of them,” he lamented.

Who is likely to win the election is a big question after a political year that has had no precedent in Papua New Guinea’s history.  The consistent feature of previous elections has been a very high turnover of politicians with up to 80% of sitting MPs losing their seats.  So while Peter O’Neill and Sir Michael Somare are each determined to return as prime minister, there is also a chance a completely new face may emerge.  What is highly likely is that, as in all past election years, the new government will be a coalition with very little chance that one party alone will gain enough votes to form a government.

Peter O’Neill and the milestone era in PNG

The tale of PNG’s two governments

Really insightful piece. PNG seems to have been going backwards these past few years, and hopefully the ballot will be the circuit-breaker the country needs.