Democracy has so far been a hard pill to swallow for many Egyptians, writes Vickie Smiles, a freelance writer in the Egyptian city of Alexandria.

In the northern city of Alexandria, cars immediately began tooting their horns and kept the noise going long into the night as Morsi supporters marched from all points to celebrate at Ibrahim Mosque, the Alex equivalent of Tahrir. 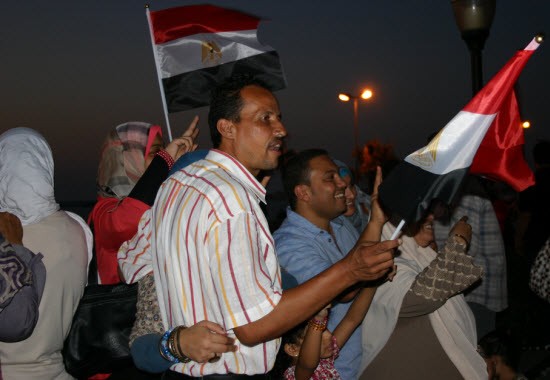 Morsi’s victory puts an end to fears that a win by his rival and former prime minister Ahmed Shafiq would see a return to the repressive and corrupt policies of the 30-year Hosni Mubarak era. It also knocked on the head the conspiracy theories that the delay in making the announcement was due to the military trying to negotiate something tricky and install their favourite candidate Shafiq.

In a conciliatory speech delivered about 10pm last night, Morsi said: “National unity was the only way to get Egypt out of this difficult time. We have many resources but they have been miss-used. We are Egyptian, both Muslims and Christians and we will fight those who interfere with out national unity.

“The revolution is still going on till we realise all the results and the aims,” he continued, prompting another loud roar from the masses in Tahrir. Morsi also pledged to “protect all international agreements”.

Waiting for yesterday’s result was sheer torture for the millions in Tahrir and other city squares and for those in front of televisions throughout the country. The press conference, scheduled for 3pm, began 40 minutes late with the national anthem then a long speech by Farouq Sultan, head of the electoral commission.

Sultan felt the need to defend the commission’s independence and integrity. “We have faced a wall of skepticism from the beginning,” he complained. Almost an hour-and-a-half later, after running through many of the 456 complaints lodged by the Morsi and Shafiq camps, he announced the figures and declared the winner.

For Morsi, the hard part starts now, particularly in convincing the nearly 38 million eligible voters in Egypt who didn’t vote for him that he is not the devil and that the Muslim Brotherhood will have little influence on his presidency. He’s already said there is no such thing as an Islamic democracy, just democracy only with the people the source of authority.

As promised, president-elect Morsi quickly resigned from the Muslim Brotherhood and its Freedom and Justice Party, hoping to send a signal that he was there to represent all Egyptians. How he represents or deals with the military is another matter as up until now the Supreme Council of Armed Forces (SCAF) has held all the cards.

Whether deals have been done has yet to be revealed, but in praising the army, Morsi has stepped back from any hands-on battles.

Morsi has already given assurances that a team of presidential deputies will include women, Copts and youth representatives and that the majority of the government will not be from the Brotherhood. Also the prime minister would be a non-aligned political figure and hopefully someone such as Mohamed El Baradei.

The farce of the past week of waiting to name the president was exacerbated by reports of Mubarak’s death. Last Tuesday the ailing 84-year-old went from having heart failure to a stroke, to being in a coma and clinically dead, all of which necessitated a move from the Tora Prison hospital he so despised back to his five-star (with swimming pool) hospital in the upscale Cairo suburb of Maadi. Reports are now circulating that he only slipped in the shower.

The reality of the election results also brought relief from the nonsense that passed for fact, much of it directed at Morsi and the Brotherhood.

Certain sections of the media, including state and private, have been making some outrageous claims against the Brotherhood. El-Dostour newspaper in particular suggested that if Morsi lost, the Muslim Brotherhood would mobilise protests and use snipers to shoot citizens and create chaos and bloodshed. Also Bedouin groups from Sinai would attack security checkpoints in the peninsular to help members of Hamas enter Egypt to facilitate a revolt against the army and the new president.

Tahrir Square was occupied almost continuously last week after the military’ dissolution of parliament. “Down with the military,” the protesters chanted but there was little outrage from other parliamentarians, business, community or religious leaders.

Saad el-Katani, the Brotherhood’s speaker of parliament apparently met with the Military Council’s deputy, Sami Anan to tell him that the group did not recognise the dissolution of parliament but details of the conversation were sparse.

Neither the Muslim Brotherhood nor the Military Council is into transparency leaving only speculation about the strategy of either. The US-based Carter Centre, however, one of the few international groups accredited to monitor the presidential run-off, said it was alarmed at the developments.

“I am deeply troubled by the undemocratic turn that Egypt’s transition has taken,” former US president Jimmy Carter said in a statement. “An unelected military body should not interfere in the constitution drafting process.”

Democracy has so far been a hard pill to swallow for many Egyptians, who never thought that elections might deliver a party they did not want, a leader they didn’t like or worse still, one they absolutely hated.

SO we can all look forward to sweetness & light and democracy in Egypt, now that the Brotherhood have come out of the shadows with the pre Enlightenment dogma.
No wonder Israel is remaining stumm about dislodging Assad – the last thing they need is to be completely surrounding by Salafist funded by that great & good, US backed democracy, Saudi.