Qantas pleads for govt protection from the Joyce discount

Qantas' latest demand for protection is an old trick from an airline bereft of ideas.

Despite his Irish heritage, Alan Joyce is the consummate Australian businessman. No one better personifies the current tendency of many of our most prominent to blame all their problems on others — their employees, the government, their customers, evil foreigners — and to demand that governments do something about it.

The latest lesson from the Alan Joyce school of managerial excellence emerges today with Fairfax reports about Qantas lobbying parliamentarians to block Etihad’s investment in its rival Virgin, on the grounds that a cashed-up Virgin could, well… compete more effectively with Qantas.

According to the Fairfax report, Qantas is warning it could be forced to shut down. Yes, shut down — Qantas expects to make $600 million from its domestic operations this year, up $50 million on the previous year. Virgin’s entire half-year profit to December was $96 million.

At least the “shut down” threat is a variant on the traditional Qantas threat that if anyone was allowed to compete with it, it would be forced to close unprofitable regional routes, a claim that invariably alarmed rural and regional MPs and that underpinned years of aviation protectionism run by the federal Department of Transport, whose bureaucrats enjoyed multiple junkets a year (via the pointy end of the plane) to negotiate aviation rights that fiercely protected Australian consumers from the benefits of competition.

What’s happened over time is that competition has — in the funny way it tends to — exposed Qantas’ management, in the same way former monopolies invariably struggle to adjust to life after gouging. And, in particular, that of Alan Joyce. The Qantas share price now carries a substantial Joyce discount. This is the performance of Qantas shares since Joyce came on board (sorry) in November 2008, compared to the ASX 200, from the ASX site. 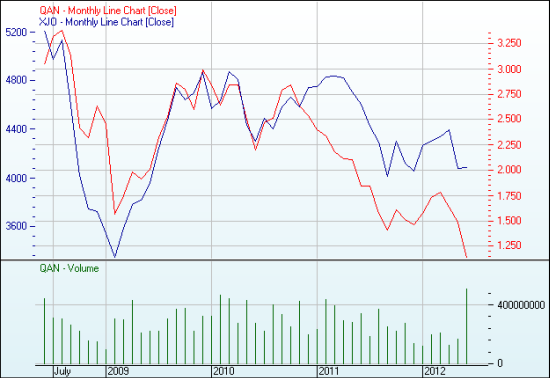 Under Joyce, Qantas began seriously underperforming in the market in late 2010 and the gap has only widened, albeit slowly, since then. Joyce’s main reaction was to declare war on his workforce, blame the Fair Work Act and promise grand offshore ventures that came to nought. Now, it appears, he has fallen back on the Qantas tradition of demanding protection from competition, at the direct expense of Australian consumers.

It’s the sign of a CEO and management team apparently bereft of ideas about how to respond to competitors, some of whom, yes, are government subsidised, but others of whom, like Virgin, have simply exploited Qantas’s own ineptitude.

The remorseless logic and profound disdain of Alan Joyce

I blame the board and the Shareholders (other company CEO’s and board members) for not sacking Joyce and getting someone who can actually do the job.

Alan Joyce is evil. Blame the workers – start with the top sunshine and resign. You have ruined a good airline which once had a good reputation. GO BACK TO WHERE YOU CAME FROM.

Bernard; every time I hear this leprechaun leech say it, he says “Qaantis” and for some reason it’s annoying. He’s a sawn-off flying Sol Truhillo who sank the last outfit that employed him.

Make no mistake – he is on a mission.

I agree with GEOMAC62 (nice avatar!) and for that reason haven’t flown Qantas since its grounding and lockout. Surely the Government wont block Etihad’s expansion of Virgin. Now I understand the reason for its expensive sponsorship of the stadium I still call Docklands.