In today's Media Briefs: Hey, ACA, an ill Clive James is "getting near the end" ... Audio blooper on RN Breakfast ... Front Page of the Day ... The Department of Corrections ... ACA breaches code and more ...

Eastley slags Latham on RN Breakfast. There was an amusing audio overlap on the Radio National Breakfast version of AM this morning during the story on Mary-Jo Fisher’s shoplifting affliction. To our ears it sounded like host Tony Eastley was peeved over something RN executive producer Tim Latham had told him to insert into a story.

What could Eastley have possibly been referring to? We reckon he said something like this:

Crikey understands that Eastley may have been annoyed about Latham’s request to include some additional lines in this Michael Vincent report on Julian Assange.

Have a listen here and decide for yourself … — Andrew Crook

Hey, ACA, an ill Clive James is ‘near the end’. Here’s a reminder for those paragons of journalistic virtue at the Nine Network’s A Current Affair about Clive James. Remember him, folks? The obviously ill man you door-stopped in London with Leanne Edelsten, who was seeking publicity to sell her latest book? That appalling stitch-up was rightly skewered by Media Watch.

Overnight, reports surfaced in London of just how ill James has become. He told BBC Radio 4’s Meeting Myself Coming Back: “I’m getting near the end. I don’t want to cast a gloom, an air of doom, over the program but I’m a man who is approaching his terminus … I’ve been so sick, I’m not allowed to fly. You couldn’t get enough oxygen aboard a plane to get me to Sydney. I used to be in Australia for five or six times a year but now I can’t go. The wistfulness is really building up and I’m facing the possibility I might never see Sydney again.”

So ACA can forget about an airport sting then. — Glenn Dyer

Kohler’s anti-News past back to haunt him. We couldn’t help but notice the front page of today’s Australian Financial Review featured a break-out box quoting a rather revealing anti-News paragraph, penned by Alan Kohler in 2005: 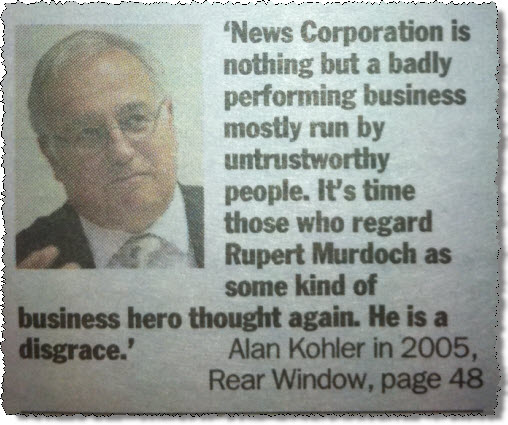 Kohler, of course, is now a News employee having had his independent publishing company AIBM snapped up early this week for $30 million (he will report direct to CEO Kim Williams after personally pocketing $8 million from the sale). But six years ago he was clearly not the firm’s biggest fan. As Stephen Mayne wrote for Crikey at the time:

“Wow. Kohler clearly doesn’t even intend to return to The Australian as a columnist, or be offered the gig fronting the sagging Sky Business Report on Foxtel.”

But return he has.

Here’s a few even more recent Kohler hits and memories located in the Crikey archives that don’t paint his new boss in the best light:

“Actually Rupert’s conversion to the cause of paid-for quality journalism is not so much irony as a decision, knowingly or not, to forgo influence for money. Perhaps it’s because at his age power no longer has the same appeal, and his children don’t care about it anyway.”

“Poor News Corporation. At the front line of one of the greatest revolutions in history, in which great opportunity wrestles daily with horrendous value destruction, and the company is cursed with a leader who was born 79 years ago, in the Great Depression.”

Front page of the day. Today’s West Australian leads with the latest asylum-seeker tragedy near Christmas Island, some 2600 kilometres north-west of Perth: 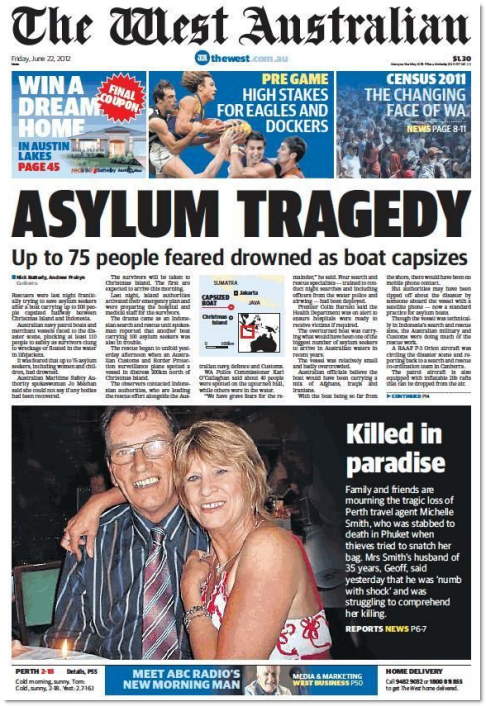 The Department of Corrections. Destined to be referred to in Canada’s journalism schools for years to come, this is what happens when you publish a photo of someone else, completely innocent, and unrelated to the story. This apology is from today’s Province newspaper in Canada: 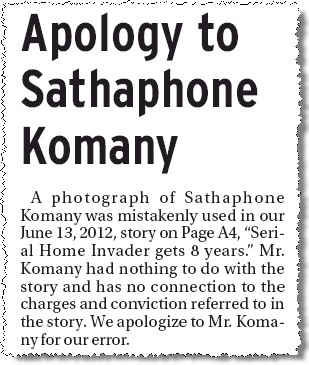 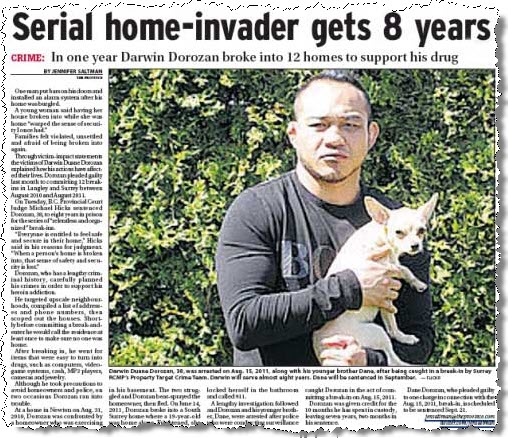 “A story on a ‘Centrelink Shame File’ aired by A Current Affair last August has been found to have breached the code of practice because it identified a child.” — TV Tonight

“A recent survey from the Reynolds Journalism Institute found that iPad users were more likely to consume news compared to those without iPads.” — 10,000 Words

“A study of more than 600 journalists across the world found that more than half source and verify news stories using known sources on social media platforms, such as Twitter, Facebook and Weibo. The research found 75 per cent of journalists in the UK do so.” — journalism.co.uk

BBC boss to head to NYT?

“Outgoing BBC director general Mark Thompson is in talks with The New York Times about becoming its new chief executive to fill the vacancy left after Janet Robinson was fired in December.” — The Guardian