Is Gillard not backing Black Caviar?

The Prime Minister has been accused of not being a loyal supporter of Black Caviar when the mare takes on the Poms at Royal Ascot tomorrow.

A crisis for the PM: accused of disloyalty. The Gillard team had better spin into action — and quickly. The Prime Minister has been accused of not being a loyal supporter of Black Caviar when the mare takes on the Poms at Royal Ascot tomorrow.

Asked by a British reporter if the Prime Minister, Julia Gillard, had sent her best wishes, trainer Peter Moody responded that ”she’s one of yours” and might be barracking for a British horse.

An urgent message of prime ministerial support is needed to avert a political disaster. 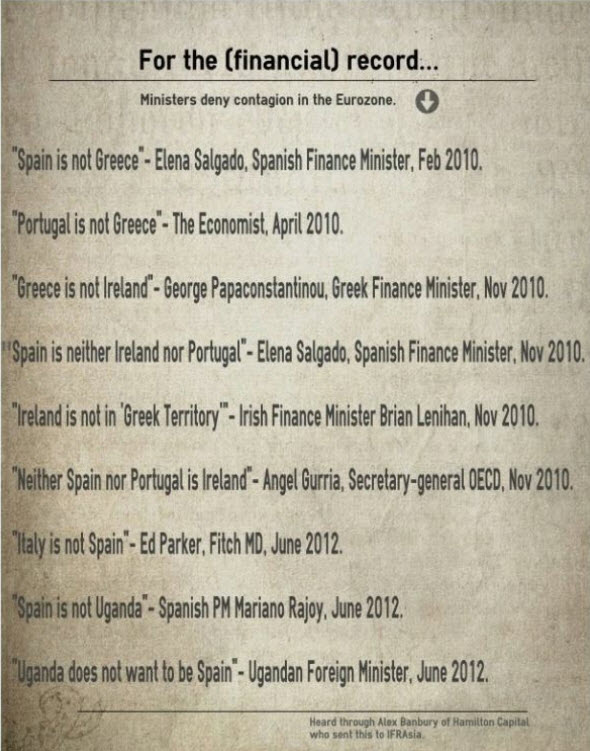 Via the Washington Post Wonkblog who got it Via Justin Wolfers.

And not so simply. The academic economists Aaron Tornell and Frank Westermann in explaining (© voxEU.org) Europe’s current financial crisis take us back to the tragedy-of-the-commons concept that has been used to explain the overgrazing of the Commons in the middle ages, the overfishing of the oceans, capital flight, etc. “Anywhere property rights are not strictly enforced,” they write, “agents tend to overuse the common-pool resources, paying attention to the average, rather than the marginal cost that their actions place on society.”

Today, we can see the tragedy-of-the-commons transpiring in the Eurosystem, where the ECB and the 17 national central banks share a common pool of money demand. The Eurosystem is not a unitary textbook decision-maker.

Generally, a private bank can borrow from its national central bank as long as the bank (i) is financially sound and (ii) has eligible collateral. What opens the door to the tragedy-of-the-commons is the way in which these conditions are implemented:

Thus, the decision of whether a bank is financially sound or not is made by the country’s regulatory authority, not by the ECB. This is a small, but important distinction.

Before the 2008 crisis there was a minimum rating of A-. In October 2008, it was reduced to BBB- and by July 2011 was completely abolished in Greece, Ireland, and Portugal. Finally, in November 2011 the ECB allowed seven national central banks to “accept as collateral performing credit claims that do not satisfy ordinary eligibility criteria.”

The complete article gives examples of the consequences of the repeated European bail-out efforts, one of which is illustrated by this graph: 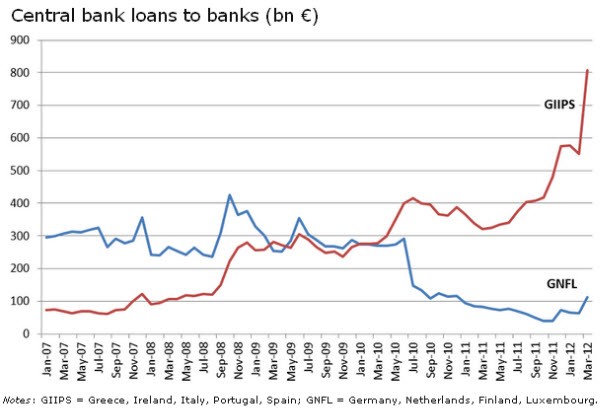 Read on (and it is a remarkably jargon free article for economists) and you reach this gloomy conclusion:

“In developing countries central bank credit expansions end up in severe crises rather quickly. This has not been the case in the Eurozone yet. As [the late, great scholar of crises] Rudi Dornbusch said, in very rich countries policies intended to delay adjustment can last for very, very long. More aid packages are not the solution, but might instead be the cause of an eventual deeper crisis.”

Untouched by human hands. Not just a vending machine but a pizza making machine as well. Coming to you courtesy of an Italian-Dutch joint venture. 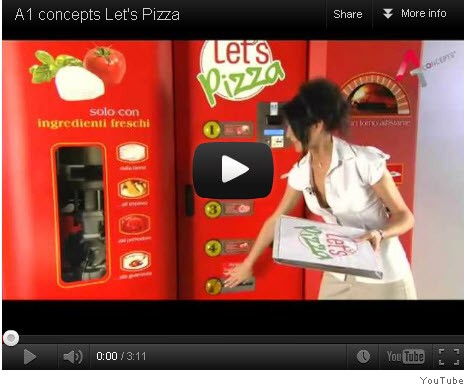 Surely no Italian would be involved in such a venture.

As the late, great Elinor Ostrom won an economic Nobel for showing, there never was a pre-capitalist medieval “tragedy of the commons”, which is not to say that our private-property obsessed system hasn’t succeeded in producing them. Oddly, the more nations privatise, the more they seem to suffer these TotC situations.