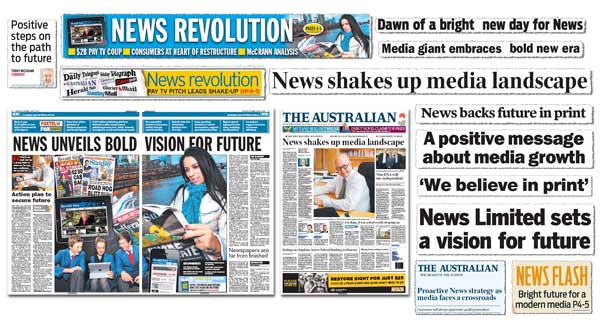 In special editions of the Herald Sun and The Daily Telegraph, News journalists bravely managed to avoid any questioning of  Kim Williams’ cost-cutting agenda, deciding instead to go large with dutiful herograms to their beneficent saviour.

Up north, the Tele was trumpeting the “Dawn of a bright new day” along with some crypto-analysis of the “key players” in the changing media world, the biggest dinkus of which was Williams’s. McCrann’s Harbour City headline hailed “Positive steps on the path to future”, while the paper’s main editorial reassured readers that “print remains viable, profitable and sustainable” and that “ongoing upgrades to our print presentation, incorporating many of the lessons learnt through our online arms, have secured a lasting and substantial daily readership”.

Over at official house organ The Oz, Damon Kitney was reporting the “inside story” of Williams’ cute bedroom routine, which apparently involves sleeping pills and a workaholic failure to place his iPhone on silent, while new recruit Alan Kohler fondly recalled his history as a News cadet in the 1970s. An editorial, headed “Proactive News strategy as media faces a crossroads”, savvily contrasted Fairfax’s “palls of gloom” with News commitment to sourcing profits from print (to which The Oz contributes nothing).

Over on the Hez‘s opinion page, former Age cadet Andrew Bolt tapped out a touching love letter to his favourite supplicant, Gina Rinehart, who continues to support his Sunday morning Bolt Report watched by few. Rupert was also mentioned in passing, even though Bolt’s ultimate boss would only be tangentially aware of goings-on in his Melbourne backwater.

On Tuesday, Crikey evaluated Fairfax’s coverage of its own reforms, noting that aside from the glowing tributes to Greg Hywood published by The Australian Financial Review, the metro papers managed to insert plenty of criticism.

But even The Fin was no match for the Politburo-approved wraps produced by News, as it forges forth into a golden era of full-spectrum content domination.

The great leader Kim “il Sung” Williams with all the News Ltd journos politely crapping their hand in appreciation. Talk about China and North Korea!

HAR HAR ….. No Wimpy Pox on limited news limited….. A Marberg, d’you hear ? A Marberg on them ! HA !…and pffff ….. A Double Haemorragic on the Canting Contrarians.

Pusillanimous poltroons of the press. QED.