The market is sceptical that News Limited will be trumped in its attempts to buy James Packer's Consolidated Media and return to control of all of Fox Sports and half of Foxtel that it had before the Super League settlement 15 years ago. Plus other media news.

MMP closes Melbourne Weekly, opens new titles. The Melbourne Weekly will cease to exist next month as Metro Media CEO Antony Catalano moves to bed down the business he half-sold to Fairfax. In an internal staff briefing sent out yesterday and obtained by Crikey, Catalano revealed he would merge its existing eastern suburbs real estate glossy into the giant-killing Weekly Review, which ripped $20 million out of Fairfax’s revenue base before being snapped up by the combined group for $35 million.

The two former Fairfax Community Network titles will be relaunched as the Bayside Review and Port Phillip Review, and will focus on local news gathering. In the north-east, the struggling Banyule & Nillumbik Weekly will merge with the The Weekly Review Diamond Valley Heidelberg. The total number of publications in the merged group will jump from 34 to 35.

“As many of you know, MMP officially takes over management of the merged business on July 9, which will then be known as MMP Media. Considerable thought is being given to the best way to build and grow a profitable and sustainable media operation,” Catalano said. However, the former Age property reporter foreshadowed some potentially painful strategising ahead, noting that while FCN West Region “has been a stellar performer”, FCN’s Central and East outposts have been “less satisfactory”. Management would focus on boosting profits, he said.

Journalists are currently being hired to contribute to some of the new titles. Last month, the ACCC ticked off the $35 million cash and $35 million assets arrangement, valuing the merged entity at around $140 million. Fairfax will take four seats on the MMP board. — Andrew Crook

Stokes will decide News’ pay TV play. The market is sceptical that News Limited will be trumped in its attempts to buy James Packer’s Consolidated Media and return to control of all of Fox Sports and half of Foxtel that it had before the Super League settlement 15 years ago.

ConsMedia shares ended at $3.38 yesterday, down on the $3.50 suggested offer price from News, which tells us investors don’t see any rivals. That might be true, but the bid still has several obstacles to overcome, the most important being: what does Kerry Stokes want? He owns just over 24% of ConsMedia and is sitting on a profit of about $200 million. But he has always fancied a return to pay TV to make up for the bitter disappointment of the C7 case, which he lost to a phalanx of opponents including News, ConsMedia, Foxtel and Telstra. Stokes, by not accepting the offer, if it is made, can sink the bid because News wants 100% control.

In fact, once it clears the regulatory hurdles, the takeover bid can’t happen without Stokes’ approval. The reports yesterday and this morning gloss over Stokes’ role and the options available to him. Stokes can bid with his 24.4% stake, plus Stokes can sell his large investment portfolio and finance the rest with the debt. The downside of that is the cost, the extra debt burden and the fact that ConsMedia’s stakes in Foxtel and Fox Sports are passive with no management input.

Stokes can also depend on the growing concern at News and Foxtel/Fox Sports that their share of the rugby league broadcast contract could be reduced if Seven and or Ten or Nine (in some combination) manage to grab more than the three games a week that Nine has for FTA broadcast. Fox Sports and News are becoming worried that the push by the Rugby League Commission for Saturday afternoon and evening games on free-to-air TV (Saturday is pay-TV’s best night for audiences, thanks to league and then AFL) will see games taken away from Fox and awarded to Ten, Nine or Seven.

In addition to that, there are several other hurdles that explain why this offer won’t go live (if it does) until late this year. — Glenn Dyer (read the full story here)

AFR hosts Shorten v Jackson. You’d think that in a week that the print media died, national financial tabloid The Australian Financial Review would find something more interesting to place above the fold than the 2007 ALP preselection battle for the federal seat of Corangamite. This morning it printed lurid details of an apparent confrontation between then-AWU national secretary Bill Shorten and Health Services Union meddler Kathy Jackson outside the Victorian ALP’s King Street office five years ago in which Shorten, “veins standing out on his forehead”, assailed her for failing to back his favoured candidate, former Spotless catering chief and deputy Melbourne lord mayor Peter McMullin.

Crikey readers will recall the Socialist Left’s Darren Cheeseman had won the rank-and-file ballot 58-42 and needed 42 votes on the central Public Office Selection Committee to snag the candidacy (Victorian ALP preselections are split 50-50 between local members and the central panel). The Jackson-controlled HSU, then supportive of the broader Right, controlled three votes on the POSC. The AFR reckoned that Jackson had switched her support to “the Cheese” because of a lingering industrial dispute between Spotless and Jackson’s members.

However, astute observers of ALP affairs recalled this morning that, in fact, Jackson was pissed off — not because of the Spotless dispute, which had been dragging on for ages, but because of her brutal knifing for preselection in the state seat of Northcote at the Victorian state election a year earlier. Jackson was a shoo-in Northcote before a Steve Bracks-brokered deal parachuted in Fiona Richardson from her previous possie in Western Metropolitan. Richardson’s husband is Shorten-aligned then-ALP state secretary Stephen Newnham.

The rancour quickly spread. After ETU organiser Mike Symon won preselection in Deakin, Jackson fired off a letter complaining about the lack of party democracy, and accusing the broader Right of duping her Deakin candidate, GP Peter Lynch, into believing he had their support. In fact, Shorten’s foot soldiers were busy assisting Symon in a quid pro-quo arrangement with the ETU’s Dean Mighell to gather support for McMullin in Corangamite (Mighell had his own candidate in the three-way Corangamite stoush, Christine Couzens, who came third in the rank-and-file vote — her votes then transferred to Cheeseman.)

As always, thwarted political ambition, not Spotless, was the catalyst for the ditching of Jackson’s support for Shorten and her union’s decision to join with the SDA-NUW Taliban forces a year later. — Andrew Crook

Front page of the day. Ecuadorian newspaper El Universo covers the news of WikiLeak’s founder Julian Assange asking for asylum from its country. The headline reads: “Assange in Ecuador’s embassy in London”. 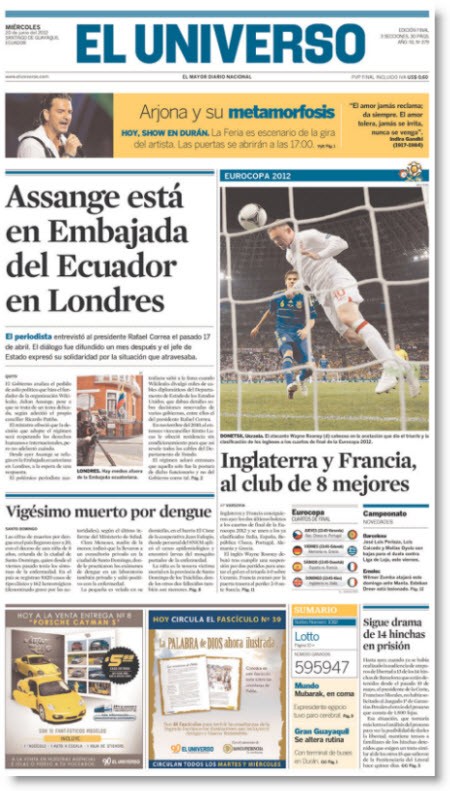 “Lynx’s latest campaign featuring Sophie Monk offering to clean various men’s ‘balls’ has attracted criticism relating to female objectification and s-xploitation. But the problem with protesting is that it is precisely this outrage that Lynx aims to provoke.” — The Sydney Morning Herald

NBC’s US Today to replace host after just one year

“NBC executives are readying a plan to replace Ann Curry on the Today show, only a year after she became the co-host of the iconic franchise.” — The New York Times

“Neo-Nazis are using YouTube’s revenue-sharing system on adverts to obtain payments from companies such as Virgin Media, BT and O2 without their knowledge or consent.” — The Guardian

“If keeping track of friends was the first wave of social media, the next may be all about hooking up with strangers. Apps designed to connect like-minded people, both online and in the real world, are being promoted as potentially capable of generating the kinds of billions Facebook may or may not be worth.” — CNN