Naked gun. Olympians and guns have been all through the news recently, after swimmers Nick D’Arcy and Kenrick Monk were castigated by the AOC for uploading pictures of themselves holding firearms on Facebook. But what about shooters in Speedos? Gun-toting power couple Lauryn and Russell Mark, the latter an Olympic double trap gold medallist, are both set to […]

Naked gun. Olympians and guns have been all through the news recently, after swimmers Nick D’Arcy and Kenrick Monk were castigated by the AOC for uploading pictures of themselves holding firearms on Facebook. But what about shooters in Speedos?

Gun-toting power couple Lauryn and Russell Mark, the latter an Olympic double trap gold medallist, are both set to head to London later this year, but not after Lauryn appears in a racy photoshoot for lads periodical Zoo Weekly — while supposedly holding a competition shotgun.

The shoot is all on the back of a bet initiated by Russell, with the proceeds on their way to Melbourne’s Royal Children’s Hospital. So is the AOC nervous? Apparently not, according to media director Mike Tancred.

“We have not raised any concerns over Lauryn Mark participating in the photo shoot. We have not asked for it to be cancelled,” he told Crikey this morning.

Doctors cashing in on an easy handout? A tipster suggests that some tech-savvy doctors have been making a nice little windfall from a federal government scheme to encourage video conferencing with patients and specialists. The government has been stumping up $6000 to doctors who implement telehealth video conferencing at their practices. The money was intended to go towards technology upgrades, upgrading billing systems, staff training etc.  But our source suggests some doctors have been using Skype to do the one required video conferencing call, “picking up the 6k and pocketing it.  Not quite what was intended”.

A spokesperson for the federal Department of Health and Ageing noted the scheme had changed in the recent budget. The $6,000 is to be reduced to $4,800 from July 1, and will be paid in two installments, with the second only available after the 10th video consultation.  So one Skype call won’t cut it any more.

The government spokesperson states that the technology doctors use to implement video conferencing “may vary depending on the local circumstances”. For those worried about shades of pink batts, the spokesperson noted that the Department of Human Services is monitoring the telehealth rebates to ensure the care provided is clinically appropriate.

Abbott goes begging.Western Australians may have a penchant for the Coalition, but there are some exceptions. A WA voter is outraged to have received a personalised begging letter from Tony Abbott in the mail. “Outraged of WA”, who lives in Julie Bishop’s electorate, wants to know how the Liberal Party got his name and address, and if the electoral roll was used, asks if that was appropriate. “What are they doing sending unsolicited beggar mail to everyone in the district?” our contact asked.

The unwelcome letter warns Labor’s carbon price will “increase the price of everything”, and goes on to claim that while Labor gets it election war-chest from the unions, the Coalition “funds its campaigns from voluntary contributions, many of them small  donations”. The letter suggests donations of up to $150, and kindly notes that donations should be “within your means”.  Which if you are Clive Palmer, Santos or miner New Hope — all past Coalition donors — is quite significant indeed. 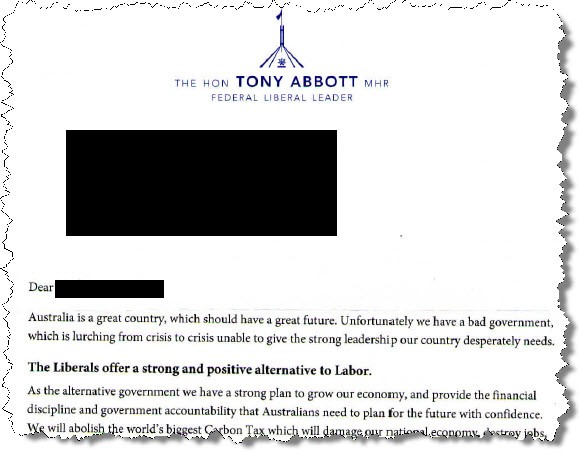 Faceless men and women of the new Queensland government. A complaint from the sunshine state that journalists can’t work out who’s who in the Newman government. One disgruntled Queenslander wants a return of the old-style printed media directory, which featured photos of each member of cabinet, their chiefs of staff and media staffers. “With a bunch of no name generic advisors and some very fresh faced Ministers running around, if the Premier is serious about open and transparent government then maybe this publication needs a revamp?” our correspondent suggested, going on to note that it “would be a bestseller rivalling 50 Shades of Grey“.

A spokesman for Queensland Premier Campbell Newman pointed to an online guide to MPs (including pictures), and a list of staffers and their contact details (no pictures) which has been emailed to journalists.  The spokesman said there was no plan to return to the old days of a printed who’s who.  With Newman famously axing the Queensland Premier’s Literary Awards soon after taking office, perhaps he’s no fan of new books.

Unions to stay in the headlines? Unions have been in the spotlight of late and that could continue, with a 3AW caller claiming the long-term president of a large union is poised to retire as soon as a dispute is finalised. Anyone know more? Tell us …

A spokesman for Carnival Australia told Crikey that foreign workers were brought in to work on the company’s eight Australian-based ships when they were in dry dock (i.e. beached for a spruce-up and repairs), but the workers were maritime technicians who “simply aren’t available in Australia”.  The workers were brought in on 456 visas for up to three weeks at a time, the spokesman said. “The lion’s share of maritime specialists are based out of Europe, and are paid generously,” he said, adding that their wages while working in Australia were above-award.

I also received the personal letter from Tony Abbott, begging me for money to fight the carbon tax from the “bad government”, gone off like a raw chicken wing my dog once stored under the bed in the spare room.
The response to the letter was much the same as my response to the chicken wing, that is, I threw up in my mouth a little and held my nose before disposing of it in the garbage bin.

At least the Rabbit can legitimately claim that people (brainwashed idiots are taxpayers too!) are out of pocket as a result of the Carbon Tax!

A friend of mine also received one. He made sure he made Abbott and the Libs paid a small yet quite real price for wasting his time by using the reply-paid envelope to mail back the torn shreds of the letter.

Probably the most notorious case of an associated entity not declaring who its donors were was a trust fund set up by Tony Abbott, hilariously called “People For Honest Politics”. It was basically set up as a political attack fund to mount legal action against Pauline Hanson and the One Nation Party. Ironically, their “honesty” did not extend to as far as coming clean with the Australian people as to who was actually funding “People For Honest Politics”. The pathetically unrigorous policing by the Australian Electoral Commission (AEC) and the weakness of the legislation was revealed by the AEC’s acceptance of Minister Abbott’s assertion that “People For Honest Politics” was not an associated entity of the Liberal Party and therefore there was no need for a disclosure of where the money was coming from.”