In today's Media Briefs: Front Page of the Day ... The Department of Corrections ... Why Media Watch didn't cover Fairfax ... The future for journalism students ... Laws to face scrutiny over caller and more ...

Front Page of the Day. “Harassment of Spain” is how Spanish newspaper La Vanguardia led today as the eurozone’s gaze turns to Spain for how it handles the fallout from Greece and the uncertain European economic climate: 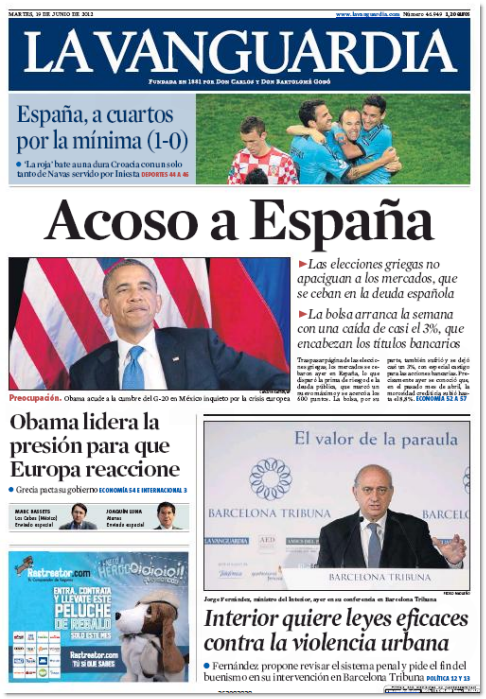 The Department of Corrections. Liberal Senator George Brandis would have had a field day with this, if the Sydney Morning Herald report was true: 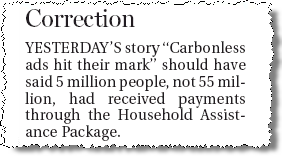 “TV Tonight spoke with Media Watch presenter Jonathan Holmes about the criticisms of not covering the Fairfax news on Monday night and whether the breaking news should have been acknowledged.” — TV Tonight

The future for journalism students

“With hundreds of editorial jobs going at Fairfax and similar cuts predicted at News Limited, the future for daily newspapers looks grim. But journalism courses are thriving, and some young media students are optimistic about the chances of getting a job.” — ABC

Laws to face scrutiny over caller

“Veteran broadcaster John Laws is likely to come under scrutiny by media regulators again after airing a talkback caller threatening a Port Arthur-type massacre.” — The Australian

“3AW presenter Neil Mitchell has switched sides from Seven to Nine. Mitchell, who dominates his Melbourne breakfast time slot with a 17.1% share, will be a regular commentator on Today, A Current Affair and Nine News.” — mUmBRELLA

London will be the first social media games

“The London Games will be the most tweeted, liked and tagged in history, with fans offered a never before seen insider’s view of what many are calling the social media Olympics, or the ‘socialympics.'” — The Sydney Morning Herald

Almost an an emergency hearing at Leveson

“Lord Justice Leveson considered holding an emergency hearing this week into reports he threatened to resign in late February after his inquiry was criticised by Michael Gove.” — The Guardian

“A candid blog post over the weekend at NPR’s All Songs Considered blog has touched off a small firestorm in the music industry over the behavior of young, ‘digital native’ music fans and the right of musicians and record companies to be paid for their work.” — The New York Times

The Gillard story that won’t go away