Getting harder to find a man in Australia?

The proportion of men to women in Australia just keeps getting smaller.

Getting harder to find a man? The proportion of men to women in Australia just keeps getting smaller. The Australian Bureau of Statistics tells us this morning that over the last 20 years the sex ratio (the number of males to every 100 females) of the Australian population has decreased from 99.4 in 1991 to 98.9 in 2011. In 1991, populations of the Northern Territory, Western Australia and Queensland all contained more males than females. By 30 June 2011 only the Northern Territory and Western Australia had more males.

Overall in the year ended 31 December 2011 the ABS estimates that the total Australian population grew by 1.4% with Western Australia the fastest growing state and Tasmania the slowest. 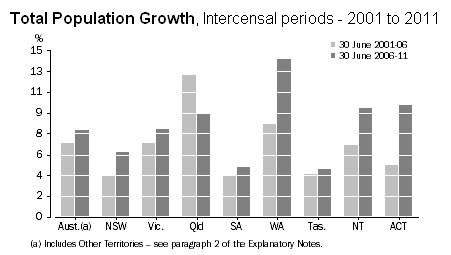 Over the recent intercensal period (2006-2011), the average annual growth rates for the states and territories from highest to lowest were as follows: Western Australia 2.7%, the Australian Capital Territory and the Northern Territory both at 1.9%, Queensland 1.8%, Victoria 1.5%, New South Wales 1.1% and South Australia and Tasmania both at 0.9%. 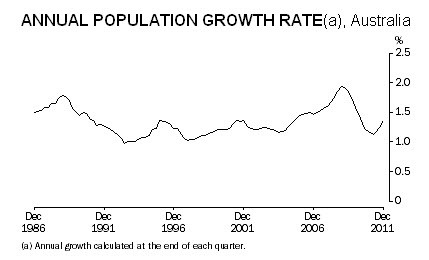 The contribution to population growth for the year ended 31 December 2011 was higher for net overseas migration (55%) than for natural increase (45%). 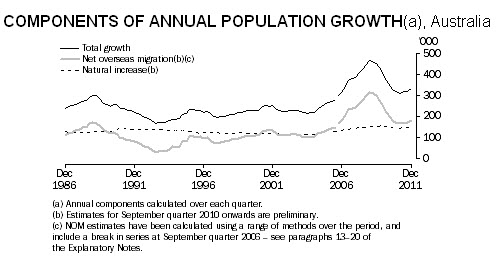 Others would love the Australian way. There’s no doubt that most European countries would love to follow the Australian way of economic growth that our leaders are so prone to lecture about. It’s just that they can’t tow their land to Asia and fill it with iron ore and coal and copper and nickel and all the rest so they can ship it to China.

One for those tabloid Confidential pages. There’s nothing like speculation that a celebrity marriage is in a spot of bother to brighten up the gossip pages of the News Corporation tabloids around the world but this one is appearing instead in the broadsheets of the media opposition.

The venerable New York Times got things rolling with a lengthy feature in its Sunday Style section. 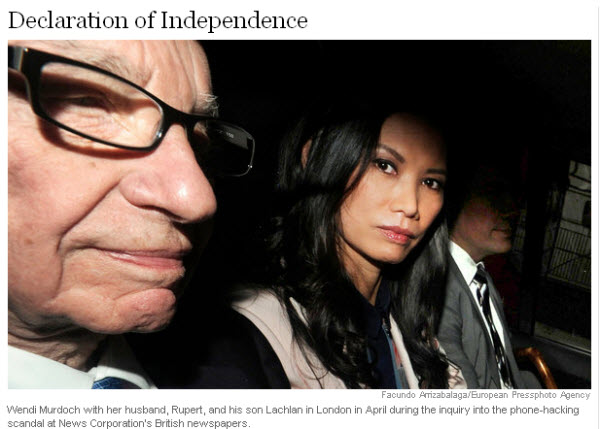 And this morning we find a lengthy piece by Michael Wolff in The Guardian trying to explain what it all means.

Maybe we will discover the real truth in the Aussie tabloids tomorrow. Or maybe not.