A week of politics with all the elements

It was all about the elements in political coverage this week folks.

It was all about the elements in political coverage this week folks:

Air — with two weeks until the carbon tax kicks in, one of the architects of the legislation, Independent Tony Windsor, gained much political oxygen while pushing for last minute changes to the pollution legislation.

Water — Federal Environment Minister Tony Burke caught a wave of coverage over his marine park proposals then threatened to cut in on any state that stands in the way of his Murray Darling plan.

Fire — the defence force was in the cross hairs as Defence Minister Stephen Smith mooted a Royal Commission into explosive DLA Piper findings of systemic abuse within the ADF. Communications Minister Conroy warned Gina Rinehart not to trash the Fairfax brand as she upped her ownership the same week it announced 1900 staff would be fired.

Earth (aka dirt) — the Slipper case, far from buried after a Federal Court hearing, had Attorney General Nicola Roxon pointing her finger at the political ambition of the speaker’s opponents as the motive behind the allegations. Albo likened the case to Watergate. Earth to Albo… 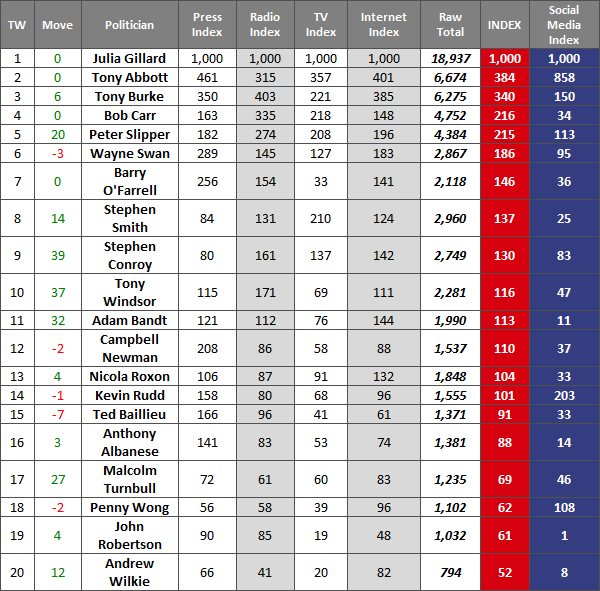 A rare social media ranking for Tony Burke in his battle for the waterways. K-Rudd ever present.

As Fairfax CEO Greg Hywood makes the moves toward digital he was advocating years prior to his current role, Rinehart’s bid for three influential seats on the board comes at a vulnerable time for the company.