Howzat! Nine News handles own ball on TV movie. “BIG SHOES” is how last night’s National Nine News titled its “report” on Lachy Hulme’s portrayal of former Nine owner Kerry Packer in the upcoming TV series on World Series Cricket in the 1970s, Howzat!, on — you guessed it — Channel Nine. “FREE KICK” would have been a better description as the report by Tony Jones lacked any real news value — apart , perhaps, from the fact that Hulme had to stack on 10 kilos to play the part.

For almost a minute and a half, Nine News viewers were subjected to file footage of the real Kerry Packer interlaced with shots from Howzat! featuring Hulme’s character and a short interview with Hulme himself. Jones editorialised at the end of the report “with filming now complete, Hulme is hitting the gym, and while he’s determined to lose the weight it’s unlikely he’ll ever lose respect for the man he’s brought back to life”. As television blog TV Tonight wrote today “it managed to air the item on the same night that Media Watch took a close look at product placement on TV”.

Oscar Wilde once said that cricket “requires one to assume such indecent postures” and it appears the same applies to Nine News. — Leigh Josey

Front page of the day. The headline in today’s Mexican newspaper El Universal translates as “FCH: The G-20 will not solve problems” — referring to Mexican President Felipe Calderón Hinojosa’s comments that the  G20 could not solve all of Europe’s economic problems. The G20 meeting is being held in the Mexican resort city of Los Cabos. 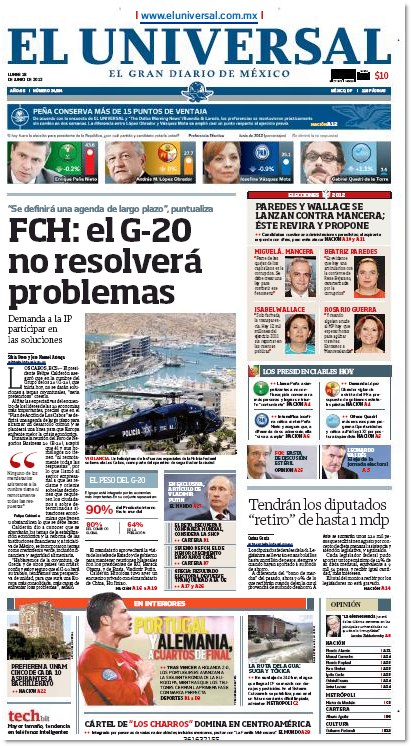 The Department of Corrections. The Scottish Daily Mail found itself in deep water over the misleading comments in a story it published recently, which it corrected today:

“John Allan will leave the role of chief operating officer of News Limited’s national broadsheet, The Australian, on Friday after a year leading its commercial and digital strategy, it was announced yesterday.” — The Australian

“Bob Woodward and Carl Bernstein’s investigation into the origins of the Watergate break-in — which took place 40 years ago yesterday — is one of the most highly mythologised episodes in the history of journalism.” — Gawker

Digital subscriptions up at The Economist

“The Economist’s digital-only paid circulation grew by more than 50 per cent in the last financial year, according to its annual report published today.” — journalism.co.uk

“At the headquarters of The Buffalo News, the only visible sign of the owner is a small photograph hanging in the office of the publisher, Stanford Lipsey, signed, ‘To the best in the business, Warren.’ Warren is, of course, the billionaire Warren E. Buffett.” — The New York Times

Being disciplined by ACMA is like being flogged by a lightly steamed lettuce leaf. H*ll, the offenders probably enjoy it.

Any take on Radio National’s new format arising from the current survey?