From the Crikey grapevine, the latest tips and rumours … Slipper adviser to spill. Is former Peter Slipper adviser Karen Doane going to spill her guts about the Peter Slipper affair to save herself? We hear she told friends on the weekend that she is not going down with James Ashby, whose witness statement about […]

Slipper adviser to spill. Is former Peter Slipper adviser Karen Doane going to spill her guts about the Peter Slipper affair to save herself? We hear she told friends on the weekend that she is not going down with James Ashby, whose witness statement about harassment by her old boss was read out in the federal court this week.

Fairfax humiliations. Remember the tip from a few weeks ago, questioning how many Fairfax staff were being asked to reapply for their jobs? Apparently that’s one technique that will be used to establish who’s staying and who’s going …

Crimes to tabloid? They’re not saying. The Sydney Morning Herald will downsize to a tabloid format, and The Age, but what about Fairfax’s other metro daily The Canberra Times? Staff are unsure and Fairfax isn’t saying. “We’re not making any comment at this time,” a spokesperson told us.

News Limited is next. One News watcher warns that the cost cutting at News is likely to be at least as deep at Fairfax and could be even worse:

“Kim [Williams] gathered the CEOs together last week and they are said to be shell shocked. The cuts will be broad and deep and the blame is being laid squarely at the feet of [John] Hartigan and [Peter] Macourt who “should have made these changes 10 years ago”, sound familiar? Of course, in typical News fashion changes are already being made. in Sydney editorial staff are already being let go and lucky staff are being transferred to digital products. Unlike prior culls, there will be group-wide announcement. However, like most of News’ changes we will never know the full extent.”

Goss from the glossies. We hear that ACP is still talking up plans to launch ELLE next year (you know, strong retail and magazine market and all that … or not). Also, apparently Hearst (licensee of Harper’s Bazaar) is reportedly furious with ACP for the mess that Harper’s has been left in. Every single member of the fashion department except for one fashion assistant has left Harper’s to join editor Edwina McCann at Vogue. The rumour is that advertisers have started to pull out of Harper’s as well because ACP is taking too long to announce a replacement editor and fashion team. Publisher Robyn Foyster is in charge of the Hearst titles and apparently under the pump over this.

Curtin Uni confuses people who’ve never been there. One Crikey reader received a rather confusing email from Curtin University titled “Exams are over — how to view your results”: 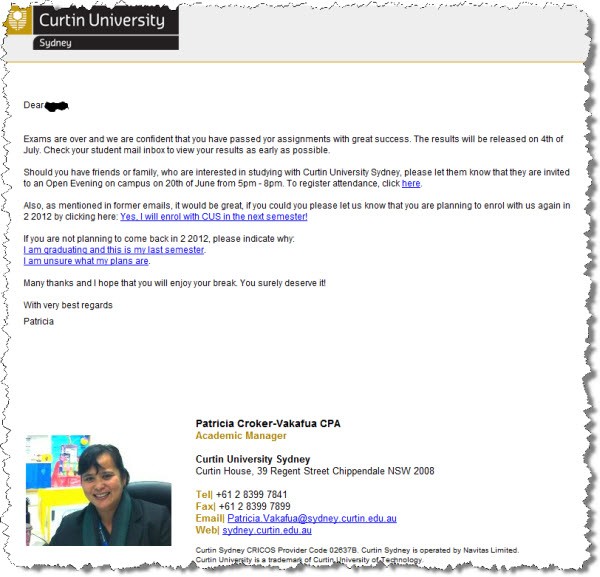 “The problem is, I’ve never been there or had any contact with them,” the recipient told Crikey. Soon  afterwards another email arrived: 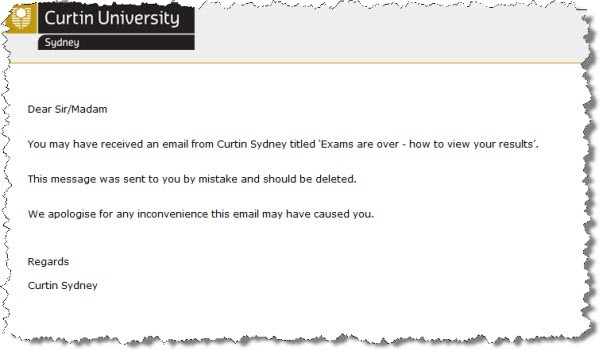 “I wonder where they got my email address from and is this a new ‘creative’ way to enrol more students?” asked our tipster. We called Curtin University who told us that it was a technical issue. All recipients of the email were not students of Curtin, had never been enrolled and lived all over the country. So how did the uni get the email addresses? “The IT team is still investigating,” we were told. Also, many apologies, etc. “And all confidential, private information remains secure,” a spokesperson told Crikey. Right then …

“APRA [Australian Prudential Regulation Authority] should require banks to advertise outages so customers can make other arrangements,” the customer told us. “Oh, did I mention I was on a mobile while waiting?!”