Cut our ranks, but we’ll say what we like: Fairfax on Fairfax

Fairfax newspapers have keenly embraced reportage on their own company’s gutting, with The Sydney Morning Herald, The Age and The Australian Financial Review attempting — with varying degrees of success — to demonstrate the fierce editorial independence of their once-respected proprietor.

Yesterday, CEO Greg Hywood announced he would encourage redundancies or forcibly sack a fifth of his staff, move his major metro papers to broadsheet, erect a metered paywall and close capital city printing plants to save $235 million a year.

The AFR, slavishly reacting to its master’s voice, fondly recalled Hywood’s coming out as an economic rationalist in the mid-1980s when he was covering the Hawke-Keating government reforms. Its gloriously stylised front page pic fondly depicted their determined CEO in preparation for editorial edicts delivered by Gina Rinehart and Jack Cowin.

The already-tabloid Fin turned out nine pages of coverage spattered liberally with personal quotes from former editor Hywood, which were all about “spearheading the digital future”.

Dual Victoria-South Australia correspondent Mat Dunckley was dispatched down to Albert Park to ask local denizens how The Age moves them (it was all good), while Michaela Whitbourn did a nice Tweet wrap.

The only dissenting Fin voice as far as Crikey could see was from former editor Michael Gawenda, who questioned the company’s commitment to quality journalism given that it was cutting 380 editorial staff with no new plans for news gathering.

In the anaemic six pages of Tuesday general news dished up by The Age, the mood was more critical, with crack social media editor and keen union dissident Adrian Lowe producing a nice yarn with plenty of scare quotes that should have had his bosses wincing. Shane Green did a ring around of former editors and Victorian premiers who were spitting chips, while business hard heads like Mal Maiden took the reverse tack, trumpeting the necessity of reform in a digital age. 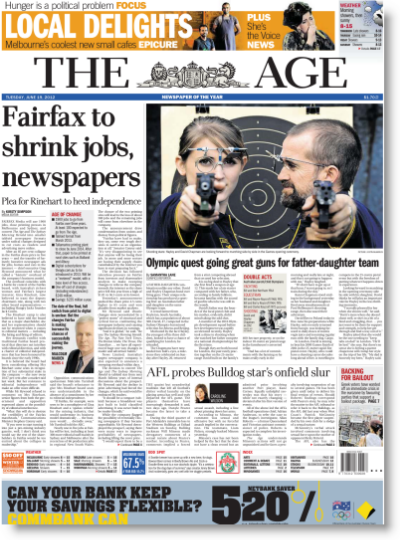 A thousand kilometres up the eastern seaboard, The Herald was doing its best to see the light at the end of the tunnel, with John Huxley pondering the grand sweep of history as one reason why the revamp of the city’s esteemed organ “had” to occur.

Most of the SMH‘s coverage was consigned to the under-read Business Day section, that included Maiden’s column and a more critical assessment from Elizabeth Knight. 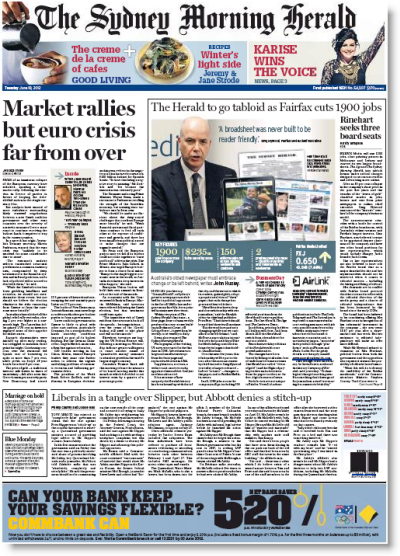 To their credit, both soon-to-be-tabs covered Rinehart’s push to assume the deputy chairmanship of the Fairfax board and install two other acolytes, as she moved to jack up her company shareholding to over 19%. Both reported comment from third parties saying the Gina should not be able to control the papers’ editorial line.

Burge is back as Fairfax executive ranks swell

With $5b of intangibles, will new Fairfax director wield the axe?

If politics were a sport those playing and those spectating would demand the
disciplined rules and expectations of fair contests which underpin the quality
of writing in the sports pages, the pages read bya majority of newspaper
readers.
And like the majority of Australians this majority of newspaper readers are
intelligent and well educated.
Fairfax journalists need only change the evil ways they have caught from the
Murdoch press and start to treat their front page readers to the same standards
demanded by their intelligent and well educated sports page readers.
But that would require the shedding of quite a few pseudo-intellectual pretensions.