From the Crikey grapevine, the latest tips and rumours … Limited News by the end of the week. We hear that News Limited’s HR department and others are gathering in Sydney for a big meeting in the next two days at which all the changes — including job cuts — will be unveiled. Fairfax, your […]

Limited News by the end of the week. We hear that News Limited’s HR department and others are gathering in Sydney for a big meeting in the next two days at which all the changes — including job cuts — will be unveiled.

Fairfax, your country needs you. Dear Fairfax staffers: we understand things are pretty grim at work right now, with 20% of editorial staff to go. It’s said that a problem shared is a problem halved, so we recommend sending any Fairfax news and gossip you hear around the office to Crikey. Email us or fill in our anonymous tip page.

Not even Qantas consultants have faith. At a Sydney conference on Friday one participant, a consultant to Qantas, told other attendees that the airline is about to go under and everyone will lose their frequent-flyer points. “Could be alarmist talk but the experience of Ansett burnt many people with stockpiles of points,” says our tipster. “Being a tad more iconic than Ansett, Qantas going under would still be a huge shock. And I wouldn’t put it past that clown, Joyce, to spring it on us — as he did the lockout.”

Bullying at Victoria Police. A recently formed network of Victoria Police — inspired by whistleblower ‘Dave’ on Seven News in May — are formulating a submission to the federal government’s committee on workplace bullying. Victoria Police claim that less than 1% of members have made complaints of workplace conflict and less than a third of that figure are bullying complaints. As Vic Police said in a statement after the Seven News story ran:

Not so say the Police Association who cite a recent People Matter survey that says over 30% have experienced bullying in the workplace and detrimental action for reporting it: 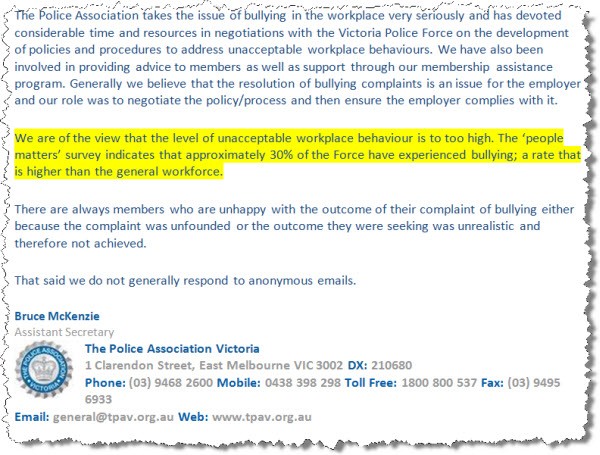 Newspaper free-for-all #856784: how the West was lost. Over at the SupaIGA in Hilton, West Australia, copies of The Weekend West are up for grab for whoever will take ’em … 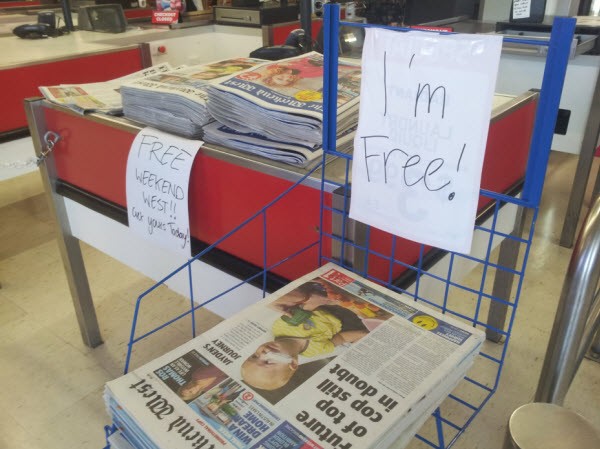 Un-Australian. As opposed to a newspaper free-for-all, one NSW coast local has found their supply to The Australian cut off:

“My local newspaper outlet (Careel Bay, NSW) didn’t have an Australian this morning and the proprietor advised me he wouldn’t have one in future. ‘No point,’ he said.”

Anybody else similarly affected?

CORRECTION: An original version of this story included information about John McTernan and Nick Reece. McTernan has told us that the story is completely untrue. We are happy to correct the record.

The silver lining of Qantas going the way of Ansett would be that Joyce no longer has a job.

You’re so transparent with your Fox News style “some people say” spray at Alan Joyce. Clearly the airline is in deep trouble. Clearly, as with Ansett, the 1970’s style pay and conditions of its geriatric staff is the single most debilitating drain on Qantas’ performance. By separating the international division from the profitable domestic division, Joyce has a chance to put in the profound changes needed for it to survive.

RIP , the Australian newspaper will be knocked on the head after FRIDAY’S MEETING .