In today's Media Briefs: Front Page of the Day ... The Department of Corrections ... Seven suspends Today Tonight reporter ... Ebook sales finally take over from hard cover in the US ... Sunday Sun's sales slip and more ...

The call to save Rupert Murdoch? So it seems News Corp can pull out all stops to track down internal phone calls — when it suits. According to The Guardian, News Corporation staff have been ordered to track down a single phone call to clear their boss, Rupert Murdoch, of what is looking like a porkie of some significance. It’s all to do with a comment Murdoch made in April at the inquiry that Gordon Brown (then PM) spoke to Murdoch after The Sun had switched its support to the Conservatives. Murdoch claimed that Brown said his government would make war on News. Last week Gordon Brown denied that call had taken place.

The Guardian piece reports the UK Cabinet Office has released information casting doubt on Murdoch’s claim: “[The Cabinet Office] said there was only one record of a call between Brown and Murdoch in the year up to March 2010 and that the conversation took place on November 10, 2009, when the two men discussed Afghanistan.” The report also noted that according to News Corp sources, internal technical staff are “now going through phone records forensically in an effort to provide supporting evidence to Murdoch’s testimony that the conversation did take place”.

You’d be entitled to ask why News staff and management didn’t order the same sort of desperate search when the phone-hacking story broke in 2007. It might have changed history and relieved the Murdoch empire of the current disaster.

The debate over the mysterious phone call hasn’t affected News Ltd blogger Andrew Bolt’s staunch defence of his bosses. Bolt delivered an intemperate attack on Justice Leveson yesterday, calling him a “pompous ass”: “The man is in charge of an attack against a free, rambunctious media, giving every appearance of sympathy to those who want less scrutiny, specially from conservative newspapers. I said pompous. Now let me add ‘hypocrite’ and even ‘censorious buffoon’ …”

If News Corp staff can’t find that phone call between Murdoch and Brown, then the News Corp chairman seems to be in denial, or engaging in a bit of history rewriting. Surely Bolt will address this issue in the interest of balance and free speech? — Glenn Dyer

Front page of the day. Greece is the word today as the English version of Kathimerini this morning leads with the narrow victory overnight of the New Democratic Party — which favoured a European bailout of the troubled country: 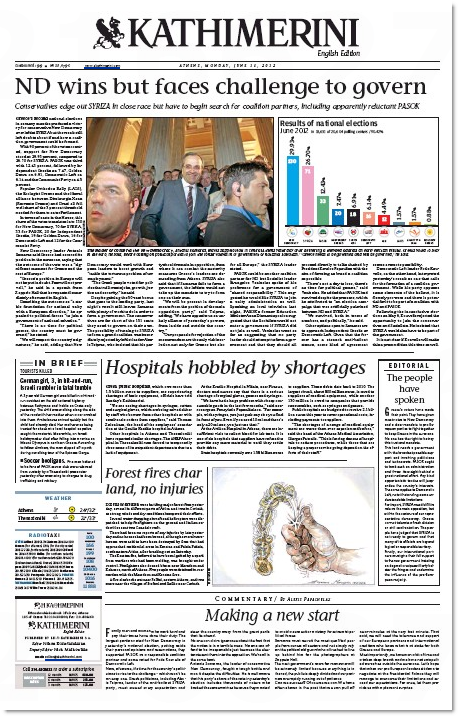 The Department of Corrections. The SMH today ran a correction as it too got swept up in Black Caviar-fever: 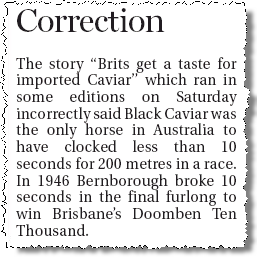 “Today Tonight reporter Jonathan Creek has been suspended by Seven after assisting in staging fake paparazzi photos of Simone Callahan and boyfriend Toby Roberts, which were later sold to New Idea and Woman’s Day.” — TV Tonight

Ebook sales finally take over from hard cover in the US

“American publishers are now bringing in more revenue from ebooks than hardcover books, according to a report published by the Association of American Publishers (AAP).” — Mashable

“A video journalist covering the Syrian uprising for The Associated Press was wounded while filming clashes between rebels and the Syrian army. ” — Newsday

“Weeks before the summer Olympics in London and the start of the National Football League’s training camps, Sports Illustrated is cutting editorial staff through buyouts and possible layoffs.” — The New York Times

“A free press is at it’s best when a Murdochracy is so dominant it can Blot out the competition.”

[I’m going to stick my neck out here and defend him – to all those people saying Blot isn’t a journalist’s cloaca – I reckon he is!]