Australians might be giving Prime Minister Julia Gillard a somewhat cool reception but things will be different when she arrives in Rio de Janeiro.

A warm welcome for our PM. Australians might be giving Prime Minister Julia Gillard a somewhat  cool reception but things will be different when she arrives in Rio de Janeiro next week for the Rio+20 earth summit. The Labor government’s decision to create a network of marine reserves around our shores that will cover 3.1 million sq km of water is being acclaimed internationally.

Oceans are one of the major themes for the Rio talks and conservationists have expressed their delight at the Australian move to set up the world’s largest network of marine reserves. As the BBC has reported, coming just before ministers arrive in Rio, conservationists hope it will inspire other countries to commit to strong safeguards. But globally, the picture is bleak, they say.

But maybe not in Indonesia. If the Gillard views on protecting marine habitat give her political heroine status next week, her views on religion would not go down well if she expressed them on her next visit to Jakarta.

Alexander Aan, 32, a Minang civil servant who was arrested for blasphemy after he declared himself an atheist on a social media website, was sentenced yesterday to two years and six months’ imprisonment and a Rp 100 million (US$10,600) fine by the Negeri Muaro District Court in West Sumatra. 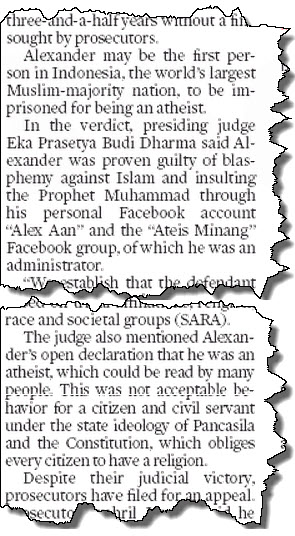 Better said than written down. Further evidence from opposite ends of the earth that in politics messages are safer when spoken than when written down.

At home here in Canberra Nick Reece, the PM’s director of political strategy, has had his return to academia marred by claims he inspired a Labor dirt unit. That followed a disclosure that that he had sent a written memo to ministerial staff six weeks ago advising them to start collating potentially damaging information on Opposition MPs.

The memo’s “to-do” list, the Daily Telegraph reported, set out strategies to gather information on the Coalition’s frontbench team, starting with their “younger days”, as well as their maiden speeches, any past ministerial record, study trips, fundraising, any companies they may be involved in and “potential issues” such as litigation.

Over in London Prime Minister David Cameron was suffering embarrassment at the Leveson Inquiry from the publication of text messages from his friend Rebekah Brooks who was married to his old Etonian (OE in text talk) chum David. Texts like this one sent by Brooks at 4.45pm on 7 October 2009 on the eve of a Cameron Conservative party conference speech:

“But seriously I do understand the issue with the Times. Let’s discuss over country supper soon. On the party it was because I had asked a number of NI people to Manchester post-endorsement and they were disappointed not to see you. But as always Sam was wonderful. (And I thought it was OEs that were charm personified?) I am so rooting for you tomorrow not just as a personal friend but because professionally we’re definitely in this together. Speech of your life? Yes, he Cam!”

It’s disclosures like that which cause a chap to suffer the kind of memory loss that provoked the page one report in this morning’s Independent: 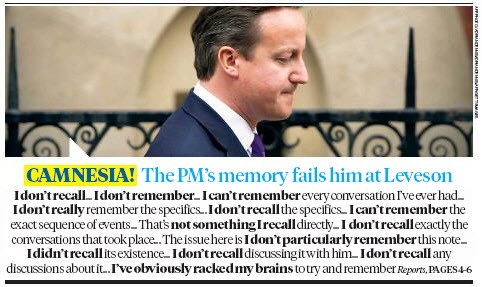 Paul Mason, the economics editor of the BBC’s Newsnight visits Greece and finds that even youths from conservative rural areas are intending to vote on Sunday for a socialist alternative:

Apostolos Mithroleos, aged 25, says: “Of course we’re worried that Syriza will take us out of the euro. We don’t want to vote for them but we have to because we’ve seen no good from the others in all these years.”

For a party that, until 2008 never got above 4% of the vote, and whose influence was confined to people who know the difference between Foucault and Althusser, this is some turnaround.

Syriza is an alliance of radical parties and movements but at its core are activists who, via one path or another, discovered a formula that has evaded most of the European left.

With its origins in eurocommunism – the current in the 1970s which defied Moscow and engaged with parliamentary politics at a national level in Europe, Syriza contains also Trotskyists, anarchists, feminists and eco-warriors.

If Leveson has shown anything, it is that despite what Brooks or Murdoch
have said about politicians not being scared of their press/viewspapers,
it was the extraordinary lengths to which those politicains would go in
sycophancy, to curry favour with his publications – for positive PR influence.
And their editorial management to edit out the embarrassing bits.
Even “befriending” them (if current trends of disdain are any indication)?

As for “Camnesia” – it was funny listening to a bloke that “thinks” so much
(“I think ….”), how much he seemed to forget – when it came to detail?
As if looking to see how much proof to the contrary might be around.

Are you sure The Independent wasn’t plagiarising Lord Downer’s responses at the Cole Inquiry into the Australian Wheat Board’s oil-for-food scandal?

Downer sang from the same songbook.

“Over in London Prime Minister David Cameron was suffering embarrassment at the Leveson Inquiry from the publication of text messages from his friend Rebekah Brooks who was married to his old Etonian (OE in text talk) chum David. ”

I assume the latter David is the nickname of Charlie Brooks