In today's Media Briefs: Fidler on the roof of ABC radio podcasts ... Mitchell: Mark Scott tried to get me to Fairfax ... Press Gallery committee elected ... Front Page of the Day and more ..

Mitchell: Scott tried to get me to Fairfax. The Australian‘s editor-in-chief Chris Mitchell tells Crikey he wasn’t perturbed by ABC managing director Mark Scott’s speech to the University of Melbourne on Wednesday night. That’s the one in which Scott taunted The Oz for failing to understand how the public broadcaster works and accused it, rather than the ABC, of being home to groupthink.

Mitchell says, despite Scott’s “silly speech”, he remains a fan of his work. “Mark has also long been a fan of mine,” he informs us. “In his time as Fairfax editorial director, he offered me both Fairfax broadsheets, one twice.” Alas, Mitchell has declined to offer any more details on this previously unrevealed titbit — though he assures us “there are witnesses”.

Scott, for his part, says: “We had communications with Chris but to my recollection a concrete offer was never put on the table … We talked to a number of different editors at different times.” Scott says it was former Fairfax executive Alan Revell who was most keen to lure Mitchell away from Holt Street. This was around 2003, when Mitchell became editor of The Oz.

As for being a “fan”, that’s not the term Scott uses. He does note, however, that Mitchell edits a “unique” and “idiosyncratic” paper. — Matthew Knott

Bormann (72 votes), AAP’s Paul Osborne (65) and Inside Canberra‘s Michael Keating (12) were left licking their wounds and will think long and hard before again embroiling themselves in the ugly trench warfare necessary to secure a spot among the chosen hacks on Capital Hill (click here for the full results).

Fidler on the roof of ABC podcasts. Conversations with Richard Fidler on ABC Local Radio (Monday to Friday in five states) is easily the ABC’s most popular radio program, judging by the dominance it has of podcasts, according to figures sent to staff this week by the head of radio, Kate Dundas.

Figures for May podcasts from Dundas, show a 4% rise in May from April, 5.5 million versus 5.3 million, while there was a 10.1% rise in the first five months of this year to 26.1 million, compared with 23.7 million for the same period of 2011. That’s about 1.21 million downloads a week or more than 17,000 a day in January-May this year. That’s not a bad achievement for the Fidler program, seeing it’s not broadcast in Victoria, the Northern Territory or the ACT.

Of the networks, ABC Radio National dominates with 2.010 million downloads in May collectively (out of a total of just over 5.5 million for the month). But its five-month total of 9.427 million was down 250,000 from the first five months of 2011. But it still easily tops the list of most downloaded network by well over four million downloads. News was second and Local Radio third. Local radio saw a more than 900,000 lift in its number of podcast downloads in the first five months of 2012. Triple J saw a small rise of about 100,000. Radio Australia, Dig Music, Science and TV podcasts also fell. — Glenn Dyer

Front page of the day. The inimitable New York Post rolls out the pun-o-matic 3000 again to come up with today’s front page on Lance Armstrong: 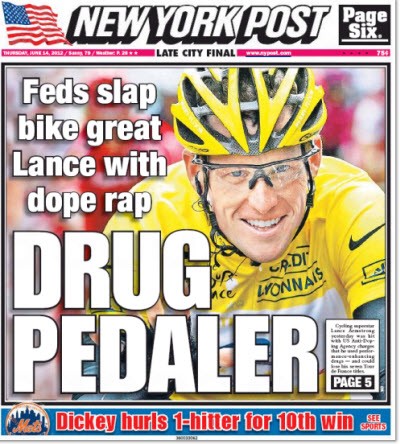 “A Canberra radio broadcaster today was suspended for suggesting a minister attach a camera to his penis to look up the skirt of Prime Minister Julia Gillard.” — news.com.au

“Two per cent of Fairfax shares were bought in one transaction yesterday, sparking speculation that Gina Rinehart is increasing her hold in the media company.” — ABC

“Matchbox Pictures will produce a new six-hour mini-series about Australian and English journalists covering the battle of Gallipoli with actor Sam Worthington to co-produce, and possibly star in. Among the journalists to be portrayed is Keith Murdoch, father of Rupert Murdoch.” — mUmBRELLA

“Authorities in Mexico’s Gulf coast state of Veracruz say gunmen kidnapped and killed a reporter for the local edition of the national newspaper Milenio, the fifth such killing in the state in one and a half months.” — The Washington Post

The ABC v the Murdochs: your guide to the battlefields