Almost 50 million Egyptians are entitled to vote this weekend for the country’s next president, writes Vickie Smiles, a writer and resident of the Egyptian city of Alexandria.

Almost 50 million Egyptians are entitled to vote this weekend for the country’s next president, now expected to be Mubarak’s friend and last prime minister, Ahmed Shafiq, after a court ruled yesterday that he could stay in the race.

The two-day presidential run-off begins tomorrow between Shafiq and the Muslim Brotherhood’s Mohamed Morsi with the latter suddenly on the back foot after a separate ruling effectively dissolved the Islamist-dominated Parliament elected last November.

The Parliament had just begun the process of selecting people to write the much-needed constitution but this will now be handled by the military. Back to square one … or even minus.

Morsi’s Brotherhood backers, whose Freedom and Justice Party won the majority of seats in that Parliament are now looking like a movement without power and candidate Morsi, an unwitting victim of state and military support for Shafiq.

Whether today’s protests in Cairo’s Tahrir Square are vengeful or not has yet to be seen but there were calls last night to “unite” against the verdict that allowed Shafiq to continue his presidential run.

After the ruling, Shafiq was quick to call a press conference, although it looked and sounded more like a victory speech with jubilant cheering and no questions allowed (they never are at Shafiq pressers).

Shafiq said he would “confront chaos” and “restore stability”. Also, “the Suez Canal will be never sold”.

Actually nobody said that it would, but Shafiq has been using the threatened sale of the Suez and any other landmark he could think of to scare people from voting for Morsi. At a press conference earlier this week he vowed he was ready to pay his life to “save Egypt from the evil of the Muslim Brotherhood”.

Such hatred had disappeared by yesterday with Shafiq promising something for everyone, especially “security”, which was a guarantee to restore tourism.

“Security” would also help set up special economic zones and there would be a “presidential commissioner” for Upper Egypt where Nubians would finally get their rights. “Girls and boys, men and women”, everyone would benefit.

“Every youth has to have a flat, apartment or house,” Shafiq added, sounding more and more like Father Christmas.

Morsi’s press conference was delayed until late last night and while there was a lot of hand waving and finger pointing about restoring the revolution and pledging his life for the freedom of Egypt the focus of the day had shifted to Tahrir Square.

Neither Morsi nor Shafiq is that popular with voters but both are trying to frighten people into voting against the other, thus marring an historical occasion that would normally be cause for celebration.

The sad fact about Saturday and Sunday is that millions of people won’t bother to turn up, including a significant number who are deliberately boycotting the two-day poll. Others will only vote for one candidate because they despise the other.

The shock of having to choose between Morsi and Shafiq has barely dissipated since the results of the first round of voting for 13 presidential candidates were announced at the end of May.

That revolutionary favourite Hamdeen Sabahi came so close with 20.7% (4.82 million) was a bitter pill for many to swallow, especially since he won Cairo and Alexandria, the heart and soul of last year’s Jan 25 revolution. 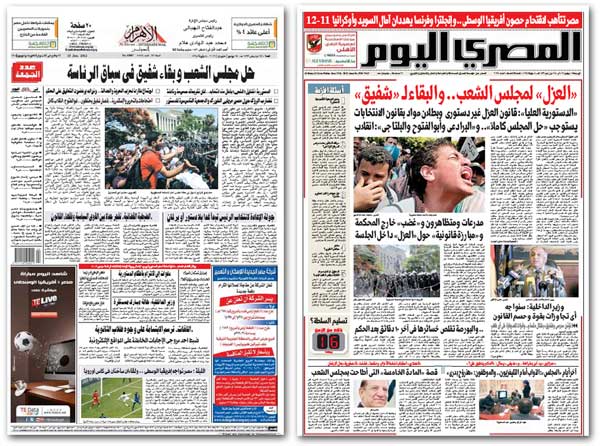 But all the anger was against Shafiq not Morsi with his campaign headquarters torched shortly after the counting that left Sabahi and the other leading candidates out in the cold.

The verdict and sentencing for the Mubarak trial, which was announced a few days later on June 2, was the last straw for many Egyptians, almost adding an air of despair about the country’s future. Nobody was punished or held accountable for ordering the killing of protestors and Mubarak’s life sentence for not stopping the killing was considered too light.

While Mubarak’s former interior minister Habib El-Adly, also received a life sentence, six police officials more directly responsible for the deaths were acquitted which fuelled even more anger and sent people back to Tahrir in protest.

Fear has long been a tool in Egyptian politics and one most skilfully used by Mubarak and his elaborate state-security apparatus. For almost 30 years, he “protected” Egyptians from all manner of threats, including that of the once-banned Muslim Brotherhood. Even the military, after dispensing with Mubarak, stayed “on message”.Security was everything. When protesters were killed, maimed, imprisoned without charge, tortured or forced to undergo virginity tests, it was all done in the name of protection.

Like Mubarak, Shafiq wants everyone to be afraid of the Muslim Brotherhood but since the military took control of the country in February last year, the state rather than any political or religious movement has ignited most of the fear and much of the violence.

During the Maspero disaster last October when more than 20 Copts were crushed by military police in their armored vehicles, the violence was inflamed by state television calling on Egyptians to stop Christians from killing the military. Why this was said and why nobody was ever held accountable remains a mystery.

But the fear mongering continues and even this week there was a public service message aired on state television, and on one private channel, warning Egyptians against “foreign spies“.

The glossy-looking commercial, backed by scary music, featured a foreign man (actually an Egyptian actor) walking into a café and then sitting down with a group of three young Egyptians. One of them starts talking about a reported conspiracy against the army and the curious foreigner begins tapping a message into his mobile phone to an unknown third party. A slogan then appears on screen saying: “Every word has a price; a word can save a nation.”

Naturally the whole thing was belittled, eventually withdrawn and gleefully mocked. The fact that it was ever made in the first place suggests a country either addicted to fear or suffering from indoctrination.

Fear has and will play a major role in Egyptian politics for decades to come. Why else would voters consider electing a man who stood beside Mubarak as 841 protesters gave their lives to get rid of him?

Egypt’s military, or Supreme Council of Armed Forces, is due to step down at the end of this month after the new president takes office and so is the current government led by Prime Minister Ganzouri. Such pledges were made when there was an elected parliament but the ruling to dissolve parliament puts them in doubt or at least uncertainty about timing.

SCAF has also grabbed more power this week through a government decree that gives military police and intelligence forces the ability to detain civilians and refer them to military tribunals.

The justice ministry decree effectively mirrors the emergency law that Mubarak used for 30 years and that expired at the end of May. So much focus on power and the past.

Smells to me as if amerika is still calling the shots with the Egyptian military obedient as well funded/trained & equipped proteges. As was often said of the various satraps in Latin America “he may be a murderous sonnofabitch but he’s our murderous SOB”. Substitute fear of islamist for kommunist for updating.