Readers’ editor watch. In August 2010 Herald Sun editor-in-chief Phil Gardner announced his paper would appoint a readers’ ombudsman — someone to critique the paper’s coverage and act as a liaison with the public. Last August he said it was “definitely still happening”. Yesterday he told Crikey his plans haven’t changed. But the fact remains: two years on, there is still no sign of a readers’ ombudsman at the high-selling tabloid. It’s the same story at broadsheet rival The Age, where staff were promised a readers’ editor in May 2011. It seems that — in these times of job cuts, declining circulation and falling advertising revenue — readers’ editors are a luxury the papers can’t afford.

The comforting news for Melbourne newspaper nuts is they don’t seem to be missing out on much. Media Watch host Jonathan Holmes spoke for many Sydney Morning Herald devotees earlier this year when he accused SMH readers’ editor Judy Prisk of lacking the mongrel to criticise her own paper. As for The West Australian, it appointed a readers’ editor in April following its much-criticised decision to leave the Australian Press Council. The West‘s Jenni Garrigan handles complaints but, unlike most readers’ editors, doesn’t write a regular column analysing her paper’s reportage. — Matthew Knott

The EPL’s £5 billion TV deal. If we thought last year’s AFL TV contract at $1.253 billion was a huge deal, then the new broadcast contract for the English Premier League (EPL) will astound you: upwards of £5 billion, or more than $A7.5 billion. The basic three-year package of its domestic broadcast rights were sold to the incumbent, BSkyB (controlled by Rupert Murdoch’s News Corp) and newcomer, telco BT Group (which ousted pay TV group ESPN) for £3.018 billion  or $A4.708 billion. The value of the deal, which starts next year, is 70% or £1.254 billion ($A1.956 billion) more than the Premier League’s existing television contract.

This trend to large price increases in sports rights deals is being driven by media fragmentation and the need for advertisers and marketers for big audiences, only available on old-fashioned media such as pay or free-to-air TV. The Australian contract for the AFL was a $A370 million, or 40% plus increase on the old contract, which ended in 2011. It’s also been seen in recent deals in the US where the National Football League boosted its annual TV income to $US3.1 billion from $US1.9 billion, starting 2014, with a group of American broadcasters, while the National Hockey League last year secured a 10-year, $US2 billion deal with NBC Universal. — Glenn Dyer

Front page of the day. The Independent today leads with a heady Rupert Murdoch mix of the latest Leveson inquiry testimony and BSkyB’s £5 billion purchase of the lucrative English Premier League TV rights: 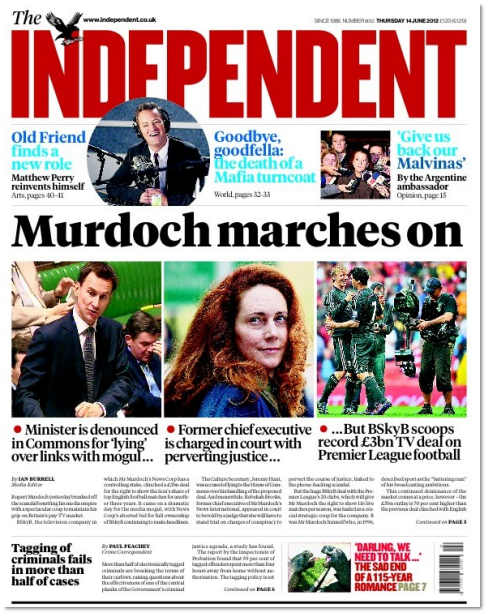 The Department of Corrections. You can forgive The Washington Post‘s much-vaunted obituary section for going with the s-xier giant — as opposed to common — squid: 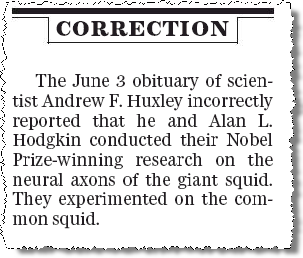 “Critics of the ABC “misunderstand” the workings of the public broadcaster and the managing director’s role as editor-in-chief, according to ABC chief Mark Scott.” — The Australian

“Journalists of Newcastle Herald have issued a vote of no-confidence against Fairfax boss Greg Hywood, who pressed ahead with a plan to shift 41 jobs from Newcastle to New Zealand this week.” — mUmBRELLA

“Jeremy Hunt has survived a Labour move to refer him to the independent adviser on ministers’ interests after Conservative MPs voted en masse to support the embattled culture secretary against claims that he lied to parliament over his handling of the News Corp bid for control of BSkyB.” — The Guardian

“Twitter has appointed the Washington Post’s social media editor Mark S Luckie as a creative content manager for journalism and the media, which will see him ‘serving as a liaison between Twitter and the journalism community’.” — journalism.co.uk

With regard to your Department of Corrections note on the obituary of doyen physiologist Andrew Huxley, the squid may be common but it’s the axon that remains giant. It’s one of those happy circumstances for physiologists that squid are possessed of a disproprtionately large axon or main nerve trunk.

Why is it so large? Probably so that it can supply the very large muscle that operates the squids aquatic jet propulsion system.

Why was that so useful to Huxley? In their seminal experiments on electrical activity in nerves, Hodgkin and Huxley wanted to change the internal ionic composition of the nerve. They could do this in the squid giant axon simply by rolling it up like a tube of toothpaste to express its contents and then refill it by injecting solutions down the lumen, something that was virtually impossible in any other neuron.