From the Crikey grapevine, the latest tips and rumours … Mark our words. Further to yesterday’s item on the rise of novelty bets: Sportsbet’s Irish parent company Paddy Power is even taking bets on the next candidate to take over from Mark Thompson as director general of the BBC. As we go to publish Ed […]

Mark our words. Further to yesterday’s item on the rise of novelty bets: Sportsbet’s Irish parent company Paddy Power is even taking bets on the next candidate to take over from Mark Thompson as director general of the BBC.

As we go to publish Ed Richards, boss of UK media regulator Ofcom, is favourite with odds of 11/10 ($2.10), but what about the chances of ABC head Mark Scott? Media watchers will be aware the Aunty chief has been linked with a move to the mother country, something Scott has denied.

Still, no one knows more than the bookies, who gave Crikey odds of 14/1 ($15) overnight on Scott making the jump. Anyone keen to jump on?

Those Vic Liberals know how to party. Last year Victorian Premier Ted Baillieu put together a new code-of-conduct that banned Liberal MPs from receiving direct donations and functions where donors pay for one-on-one politician time, that left many MPs unimpressed.

But the Victorian Liberals have a great site that updates all the upcoming fundraisers for the party, from afternoons at a house in Camberwell to discuss the National Disability Sector to dinner with Sophie Mirabella and Liberal Party book clubs: 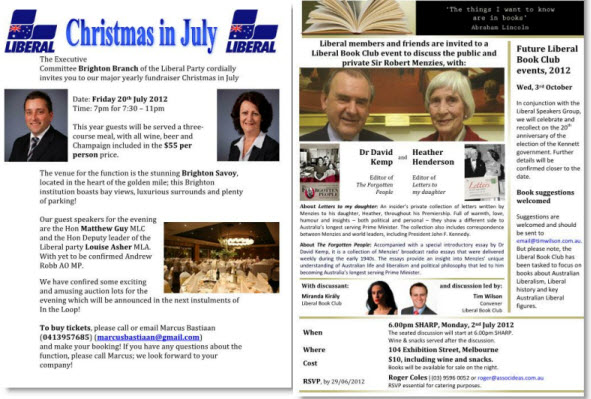 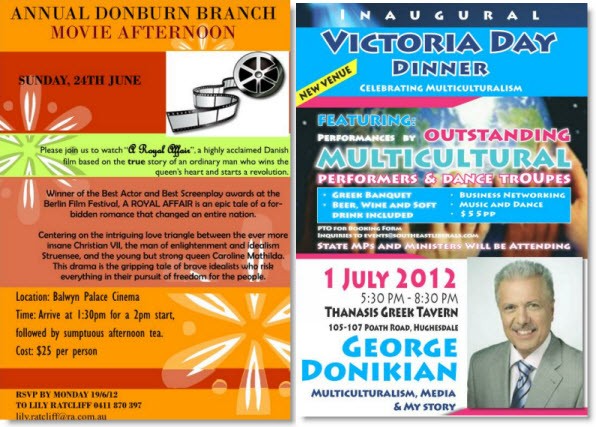 Shining the spotlight on NSW foster care changes. On Tuesday we reported on rumours regarding the NSW government privatisation of the foster care system and that children with special needs will have foster payments cut. One person in the know says the government has “fooled” the sector:

“I’m a senior public servant who has been closely monitoring the transfer of foster care to NGOs in NSW. The NSW government has fooled the sector and the public with its Children’s Guardian accreditation standards for foster care providers. The new Child Assessment Tool will ensure those standards are not met. It will be used to cut costs by re-classifying the needs of kids to cut allowances to carers and support services across the board. Sounds like a good place to start achieving the over $1 billion of unidentified budget cuts announced in this week’s budget.”

Do you work in the foster care sector or in the NSW government and know anything more about this? Please email us or fill in our tips form, anonymity guaranteed.

Truss me, I’m a rail crossing expert. Yesterday in tips we ran a photo of Warren Truss and other political heavies standing in front of the rail roads at a rail crossing for a slick photo in the local paper, which left rail employees furious at the disregard for safety for the sake of media attention. One Crikey reader brought our attention to something interesting:

“Very interested in your photo of none other than Warren Truss being shown in a compromising position at that Western Australian rail level crossing. For sheer stupidity they rarely get bigger. Any rail safety regulator worth their salt would maul you for such a stunt. Could that be the same Warren Truss that authored a 2005 report on — of all things — level crossing safety? Here in NSW the local rail safety regulator (ITSR) would have had you for brekky. Well done Warren!”

No mention of media opportunities for transport ministers though.

Bad news for Skinner on surgery wait times. We’ve run a number of tips in recent days about NSW health minister Jillian Skinner’s job being on unsteady ground. Maybe we’re just getting fed these tips from the Opposition (wouldn’t surprise us), but someone else pointed out another news story by AAP today that won’t be welcome news for Skinner:

“The national figure is up because the biggest states are going backwards.