A Westminster parliament has found it -- a way to call a political liar a liar.

A lying precedent to follow. Eureka! A Westminster parliament has found it — a way to call a political liar a liar. It happened in Britain’s House of Commons overnight when the Speaker ruled the word lying was acceptable when applied to the words of the Culture Secretary Jeremy Hunt describing his relationship with the Rupert Murdoch empire. 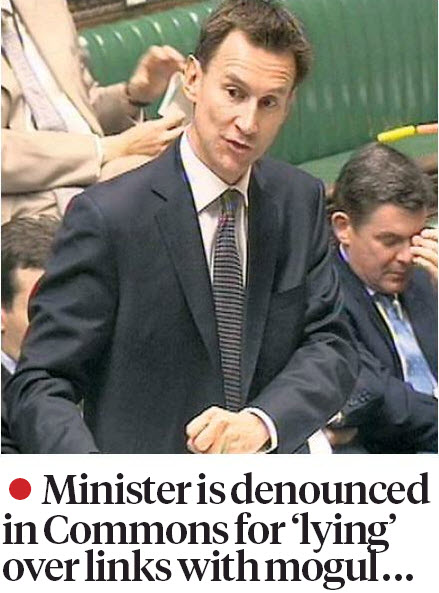 From page one of today’s London Independent

I found it fascinating listening as the Speaker John Bercow refused to ask Labor MP Chris Bryant to withdraw his claim that Minister Hunt had lied to the parliament. The Speaker’s decision to break with the traditional ban on what has previously been ruled to be unparliamentary language stunned the minister’s Conservative colleagues.

It appears that the rule henceforth will be that the accusation of lying can be made when a member’s name appears in the motion being debated.

Get prepared for Tony Abbott to start mentioning the names Thomson and Slipper in his regular censure motions in our House of Representatives.

A bad day for an economic talk-fest. They can’t be football followers on the PM’s advisory staff for State of Origin eve was bad timing for an economic summit in Brisbane. Toss in an arrest in a murder case that has been headline news for weeks and there was next to no chance of the proceedings having any impact.

The only aspect to receive any extensive coverage was the vague promise Julia Gillard made to try again to reduce company tax by increasing taxes somewhere else. That kind of news is unlikely to win back the hearts, minds and votes of Labor deserters.

And isn’t it funny how the “Curry or Maul” had been jumping up
and down at how Gillard had been ignoring us, had to come up here more
often, then gets buried inside?
But SoO was pushed off the front page – Qld. lost.

“Get prepared for Tony Abbott to start mentioning the names Thomson and Slipper in his regular censure motions in our House of Representatives.”
..oh I doubt it. The scope for Abbott to cop plenty in return is just too great. Even he, in the dark world he inhabits would realise that.