The politics of rising electricity prices

The carbon tax is not the only green scheme that will have an impact on regulated electricity retail prices in the coming year.

The politics of rising electricity prices. The good news for the federal government carbon tax spinners is that the NSW Independent Pricing and Regulatory Tribunal (IPART) agrees that for most ordinary consumers compensation for the carbon tax to begin on 1 July will be greater than the average annual cost of $168. In a report this morning IPART said:

Then there is the bad news: the carbon tax is not the only green scheme that will have an impact on regulated electricity retail prices in the coming year. The total comes to $316 a year. 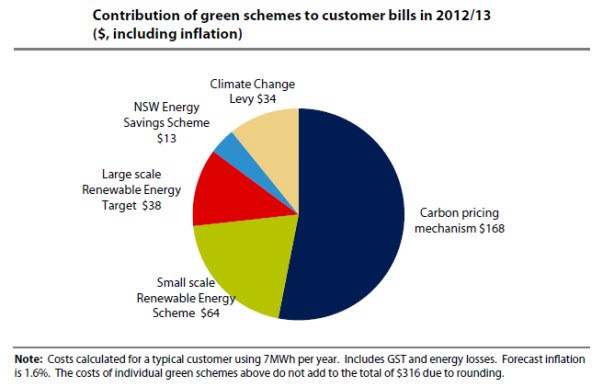 That will surely be a complication for the federal government salespeople.

Paying a lobbyist? Save your money. And forget about donating to political parties too. A soon to be published  study finds that, in general, higher corporate spending on political things is linked to worse market performance. The exception, and it is a big one, is for companies in highly government regulated industries. For them corporate political giving is positively associated with market performance.

The researchers from Rice University and Long Island University investigated the relationship between corporate political activity and financial returns on a set of 943 S&P 1500 firms between 1998 and 2008. They found that firms’ political investments are negatively associated with market performance. The findings also revealed that cumulative political investments worsen both market and accounting performance, and that firms placing former public officials on their boards experienced inferior market performance and similar accounting performance than firms without such board members.

The study, In Search of El Dorado: The Elusive Financial Returns on Corporate Political Investments, will be available online this fall and will be published in a forthcoming issue of the Strategic Management Journal.

“”The view of corporations meddling in politics to the downfall of public interests is nothing new,” said Doug Schuler, study co-author and associate professor of business and public policy at Rice’s Jones Graduate School of Business in a press release.

“Since our country’s founding, corporate political activity has been seen as promoting its own interests and agendas over those of the broader public. This study simply demonstrates that it might not be quite the return on investment that corporate America or the public at large believes it to be.”

The paper outlines four reasons to explain what the study calls its “largely unexpected results”:

Contrary to these findings, the study found that corporate political giving is positively associated with market performance for firms in highly regulated industries.

“We believe this may reflect the critical role that government can play in controlling resources and limiting behaviors through its rulemaking and enforcement processes, necessitating some level of political activities by the regulated firms,” Schuler said.

“In regulated industries, firms are better able to target specific agencies and get to know their staff, which is more likely to result in more stable interactions.”

Schuler hopes the research will challenge the preconceived notions about corporate political giving and focus on agency theory to better understand this practice.

“Like the explorers in search of El Dorado, there is a belief that political investments in D.C. will produce ‘riches around the river’s next bend,'” Schuler said.

“Unfortunately for these politically investing firms, our results strongly show that the lucrative financial returns may never materialize.”

“During and just after the Rio Earth Summit [in 1992] , there was an overwhelming air of enthusiasm and hope for the future. It was a time of optimism and, in retrospect, innocence, as everyone celebrated the end of the Cold War.

Then, incredible social and political changes that were deemed impossible just a few years earlier were, in fact, implemented. This was no accident. In order to unleash these energies on both sides we had to overcome the strong opposition of the existent power structures that blocked the way ahead. But the changes resonated the hopes of the time and leaders had the courage to respond to the call. The Berlin Wall was brought down in the belief that future generations could solve challenges together.

Today, 20 years later we are instead surrounded by cynicism and, for many, despair. This is hardly surprising at a time of an economic crisis exacerbated by increased pressure on natural resources, spreading of poverty, diminishing human security, continuing violent conflicts, and environmental degradation. I feel bitter when I look at the cavernous gulf between rich and poor, the irresponsibility that caused the global financial crisis, the weak and divided responses to climate change, and the failure to achieve the Millennium Development Goals. The opportunity to build a safer, fairer and more united world has been largely squandered.”

— Former Soviet President Mikhail Gorbachev, who now runs Green Cross International, contrasts the “optimism and hope” of the Rio Earth Summit 20 years ago with the “cynicism and despair” surrounding next week’s Rio+20 summit.

Kindleberger makes a comeback. I am rather hoping that Wayne Swan makes a reference to Charles Kindleberger when he talks at his government’s economic summit today. For that great economic historian is enjoying a return to popularity and the last Australian politician I heard quoting him was Bill Hayden back in 1980.

Wayne in those days was the Opposition Leader’s economic adviser so I have always held him responsible for Bill’s breaking forth with a few Kindleburger words to the Email workers outside their Bathurst factory gate that election campaign lunchtime. The workers didn’t seem to understand any of them and I confess that neither did I.

These days we all should have an understanding of the Kindleburger analysis of the lessons to be learned from how European politicians reacted to the economic troubles of the 1930s. Today’s circumstances have an eery familiarity to the great depression and my browsing this morning has come up with a couple of references that make that all too clear.

Some Kindleburger news and views noted along the way.

The crucial overlooked detail was the quarantining of finance to the wealth
producing manufacturing sector in the immediate post-war Japan and Germany
and the abandonment of the non-wealth producing real estate sector to fend for itself.
Governments can and should resume toxic real estate assets and isolate them from the “real”
as opposed to “speculative” economy.
Or face the alternatives.

Re the Kindelbergerr “World in Depression” new preface above.