Normalcy returns as the PM is back on top

Equilibrium returned with the PM and Leader of the Opposition followed by Treasurer Swan in his perennial third spot.

All is as it should be atop our chart this week, equilibrium returned with the PM and Leader of the Opposition followed by Treasurer Swan in his perennial third spot. Foreign Minister Bob Carr, edging ever higher in media coverage, has had a busy week, mostly in trying to assure the safety of Australian ICC lawyer, Melinda Taylor, who faces a lengthy detention in Libya.

State politics comes to the fore in the east with Victorian Premier Ted Baillieu’s hold on power in question as senior Liberals suggest interference by the Premier’s office is hobbling policy initiatives — and sniping between the Liberal and Nationals Coalition continues.

While in NSW it takes a state budget for NSW Treasurer Mike Baird to come anywhere near our top 20, and with him comes NSW Premier Barry O’Farrell who is putting the on-again off-again North West Rail Link back on the table. It was first proposed by the Carr Labor government over 14 years ago and today Sporting Bet won’t offer a market on whether it will ever eventuate. 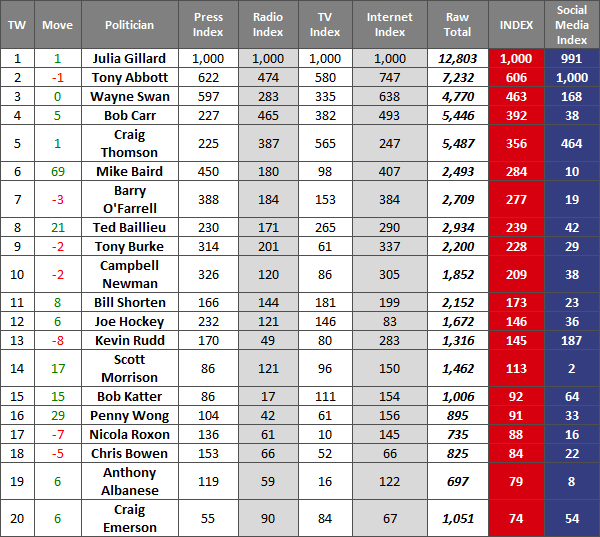 Social media discussion about PM Gillard was helped by her appearance on ABC’s Q&A this week. An anecdotal study of the episode revealed the majority of audience questions came from the right and were countered by a majority of Tweets from the left.

In bagging his seventh slam at Roland Garros, Rafa has lost just one match at the French Open ever. Wow!